What is decorator design pattern in java?

Decorator design pattern in java proposes a way to customise our objects dynamically during run time, instead of us having to write code to do that during compile time. You can think of it as an alternative to sub classing. When we subclass a parent class, there might be multiple combination of classes resulting in a class explosion. As you can see in the image below, the beverage class is being subclassed by multiple classes to add their own blend to it. Although it seems to follow the Single Responsibility Principle, it quite does not seem an elegant solution and obviously is hard to maintain.

Why to use decorator design pattern?

The snippet you saw, certainly is mind blowing. What if there was a way to reduce the number of subclasses we create for every variation of an object? That would be a lot better solution and that is what the decorator design pattern has to offer. The approach is to make objects acquire responsibilities (feature, variation, combination, additional functionality) at run time. The concept of composition comes into play when doing this. Composition is pretty different from inheritance, you see. Our decorator design pattern example in java will make it more clear, composition refers to containing instances of other classes that implement desired functionality. Inheritance is more of prototyping a parent and based on that implementing the child classes. Composition describes a “has- a” relationship while inheritance describes an “is-a” relationship between objects.

Although inheritance is a foundational pillar of Object-Oriented Programming, completely relying on it for structuring classes will lead to class explosion, as we saw earlier. Therefore, we need design patterns, and specific ones for specific situations to handle messy and repetitive code patterns. And in our case, decorator design pattern comes in handy. Let us see a code example. 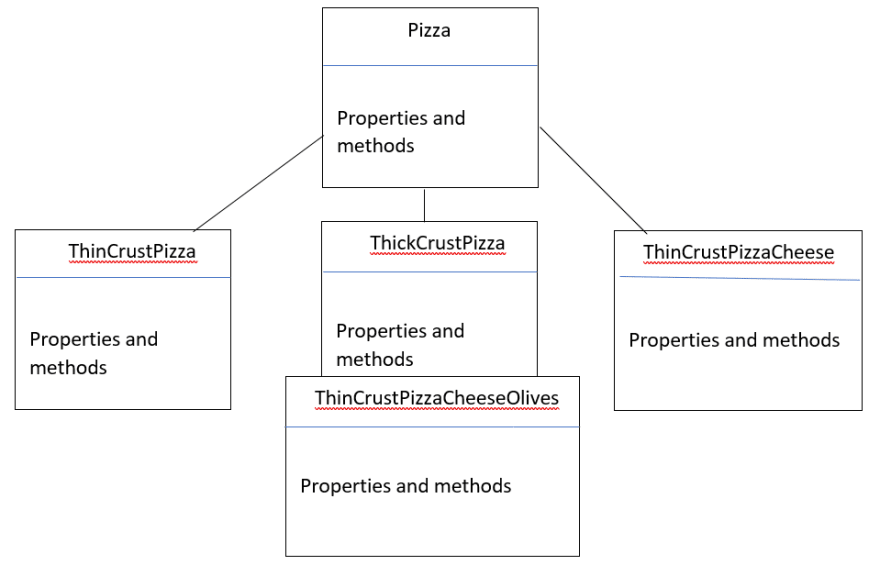 Although, the class diagram seems neat, if we had more types or toppings, it would be the same as the one we showed earlier.

How can we solve this using the decorator design pattern? Lets see..

Firstly, we will define a component (Pizza Class) which will then be extended by concrete components (Thin Crust and Thick Crust Pizzas).

Then we will define a decorator that will extend the main component.

The decorator then will be used to extend the state of the main component by adding new functionalities to it.

Did that make sense? If no, then follow along… 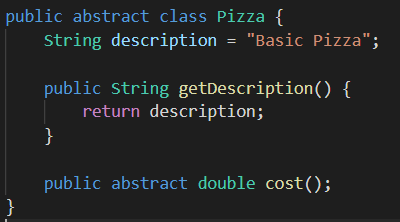 This Pizza class will be used as the base to create other types of pizza. This is the main component of our system.

The concrete components are the ones that will have dynamically added behaviour at run time. For example, “Thin crust pizza with, tomato sauce, cheese, olives”.

As you can see the decorator implements the same abstract class (Pizza) that they will decorate. This is where the real game begins. 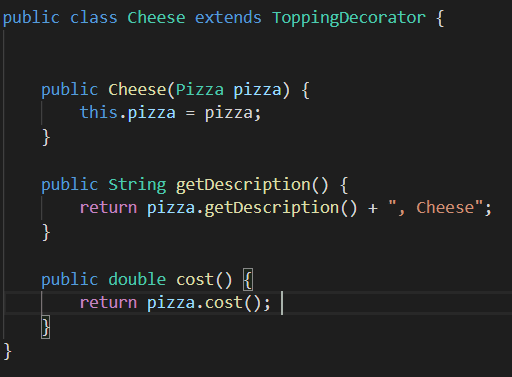 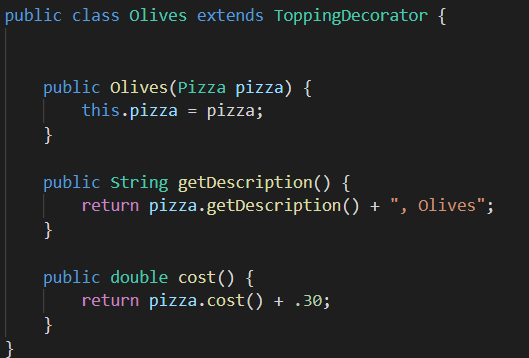 As you can see in both the implementations, the decorators have reference to the instance variable that they will decorate, in this case it is Pizza. It can be any type of pizza, all it should be is of the type pizza. Additionally, they have their own extension of description and cost.

See them in action: 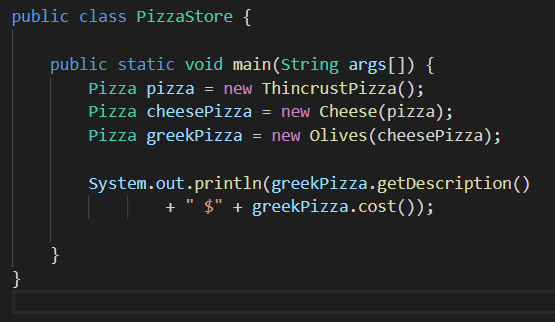 This is where everything wraps up, pizza has instance of ThincrustPizza() that has its own cost and description. The next line has “composed” Cheese and ThincrustPizza objects, Cheese class acts as a decorator for the Thincrust Pizza , so now we have ThincrustPizza with Cheese. Same applies to greekPizza. At the end ThinCrustPizza, Cheese and Olives have been composed. As mentioned earlier, “composition refers to containing instances of other classes that implement desired functionality”.In our case greekPizza has contained the reference of cheesePizza that has its own functionality, also cheesePizza has contained the reference of pizza. Thus, creating a “Thin crust Pizza with tomato sauce, cheese , olives”. This is how decorators work.

When to use decorator design pattern and what was the point of doing all these steps?

Decorator pattern solved the class explosion problem. We did not create subclasses for every type of pizza.

We can easily extend code without modifying other classes. Say, if we want Onion Pizzas with olives, we just need to extend the Topping decorator with Onion Pizza class and compose them like we did in the above example.

We can wrap the components with any number of decorators i.e. if we want onion pizza with olives and cheese, we simply need additional wrapping and not another subclass with this feature.

Are there any caveats to decorator design pattern in java?

Of course, there is, introducing decorators increases complexity of the code needed to instantiate the component. Also, it is just not about instantiation, there may be lots of wrapped objects that need to be instantiated at run time as well. The other caveat is that decorators are hard to implement in a way that does not affect the behaviour depending on how the decorators are stacked. But it surely solves an unnecessary class inheritance pattern.

If you have come this far, you surely need to know one thing, java is flooded with decorator design pattern and one such example is below. You can now guess that the BufferedInputStream is decorating the fin object.

Finally, we would like to conclude this blog by saying – use decorators when it is not possible to extend an object’s behaviour using inheritance in a neat way. By neat we mean, code cleanliness and complexity.

Read: "React Native- Getting started with a brief guide"

Monoliths vs Microservices vs Serverless

INTRODUCATION TO WEB AND HTML

Once suspended, j_marathi will not be able to comment or publish posts until their suspension is removed.

Once unsuspended, j_marathi will be able to comment and publish posts again.

Once unpublished, all posts by j_marathi will become hidden and only accessible to themselves.

If j_marathi is not suspended, they can still re-publish their posts from their dashboard.

Once unpublished, this post will become invisible to the public and only accessible to JMarathi.

Thanks for keeping DEV Community 👩‍💻👨‍💻 safe. Here is what you can do to flag j_marathi:

Unflagging j_marathi will restore default visibility to their posts.