Being an android developer, I've heard about code obfuscation pretty early in my career. Since it's preconfigured in android's gradle plugin (it's actually proguard under the hood), but you don't really mess with it unless you want to.
On the other hand, when you're developing a java/kotlin library and you want to use code obfuscation, things get a little different. In this article I wanted to give a brief overview of my strategy for publishing obfuscated kotlin libraries.

If you're not sure what that means, code obfuscation is the modification of the source code to make it unintelligible, meaning it is impossible for a third-party to understand.
It's makes for a great AppSec initiative and often takes care of the bare minimum security you can have when publishing a source code out in they wild. By making the code hard to reverse engineer, you ensure that your library's intellectual property is guarded against security threats, unauthorized access, and discovery of application vulnerabilities.

ProGuard is the most popular optimizer for Java bytecode and it also provides obfuscation for they names of classes, fields and methods.

Here we're just interested in the obfuscation step which will rename the classes, fields, and methods using short meaningless names making it really hard to read the code.

There are probably many ways to do this, but since I have a mobile development background, we'll be doing this using proguard's gradle plugin, which will make things are little more simple, specially during the publication part. Also, I'll use gradle's groovy dsl, just because I like its convenience better than kotlin's now (for gradle scripts). I may need another article to justify that, but, bear with me. This is how we integrate proguard's gradle plugin:

We now need to use it to obfuscate our library's jar. To do that we're going to use gradle's syntax to create a task that does just that.

Let's dissec the task signature for a second. Here we're declaring that this is a task of type ProguardTask and that it depends on jar task, meaning it has to run after it. This jar task comes from either the kotlin or java plugin, that you're already using and it is responsible for packaging your application artifacts into a jar file. The reason our obfuscateArtifact task needs to run after this one can be seen in the image above. Proguard takes a jar file as the input, so we need this task to create the jar and then we'll apply our task on top of it.

Now let's configure the input/output of our task:

The jar task will create, by default, the outputfile file in buildDir/libs folder. By default, its name follows the pattern: artifactId-version.jar. The artifactId is defined in the publishing task that we'll see later on. It's useful to have those values as variables declared in a gradle.properties file.

Next properties are for handling deobfuscation. These are meant to be used when you want to understand your stacktraces.

After that, we have to make proguard understand our project's dependencies. To do that we need to provide it with java's standard library and ours runtime, and compile-time dependencies. A quick explanation of the last two:

In proguard we can use the libraryjars property to provide these dependencies:

The first line has a path pointing to a rt.jar. This stands for runtime JAR and it has all the classes from the Core Java API. This is the path you use when you're targeting java 8 and below. The other two lines handles runtime and compile-time dependencies that we get by using gradle's dsl.

The last piece of this puzzle is proguard's configuration file. I prefer doing that in a separated file. If you're using intelij you can get nice syntax highlight for this file, which in my book is always a nice to have.

The configuration you're going to use is up to you, even if you don't add anything in the config file, proguard will handle code obfuscation by default. We'll come back to this file again.

Ok, now if you want to obfuscate your code you just need to:

Problem solved! Or maybe not.

Assuming you get the artifactId right, what we did until now may actually work for youu. The obfuscate task will trigger a build and then obfuscate the jar. But that not ideal. We don't want to manually run this specific task every time. To me, the obfuscation step should be just a part of our library's publication pipeline now. We shouldn't have to remember about it anymore. In order to fix this we need to take a look at this so called, publication pipeline.

If you already have one, it may be just a simple publishing task, something like this:

The key here is the from components["java"] declaration. Quoting from gradle's docs:

Components are defined by plugins and provide a simple way to define a publication for publishing. They comprise one or more artifacts as well as the appropriate metadata. For example, the java component consists of the production JAR — produced by the jar task — and its dependency information.

So, this is how our publication task gets the project's artifacts and dependencies. Therefore, if we want to publish an obfuscated library we need to remove that line and provide our publication with the output produced by obfuscateArtifact task.

So, how can we do that?
As we saw in the documentation the components["java"] is automatically defined by the java/kotlin plugin and includes all classes from the default sourceSets. If we want to define our own artifacts that we want to be published, we can use the artifact property.
This is how you do it, inside the create block, add:

Almost there! Now, we need to provide the dependency information. This comes automatically when using the components["java", but here we need to manually provide it. Still in the create block, add:

And that's about it!
Now, we can forget about obfuscation. We just run the publish task and get our obfuscated code published seamlessly.

If you're using this library in another codebase that will also obfuscate its code you might get some naming conflicts due to proguard using the same name for classes/methods in that projects own obfuscation process. To fix this you can provide proguard with a custom dictionary.

You'll then need tell proguard about it in the configuration.pro file, by adding the line.

Now, proguard will use the words in that file to name our classes during the obfuscation step, avoiding naming conflicts.

The last thing I like to do is to create a different artifactId for the unobfuscated version of the library and to publish both versions. You can see the complete script in this gist

This diagram shows our end product. 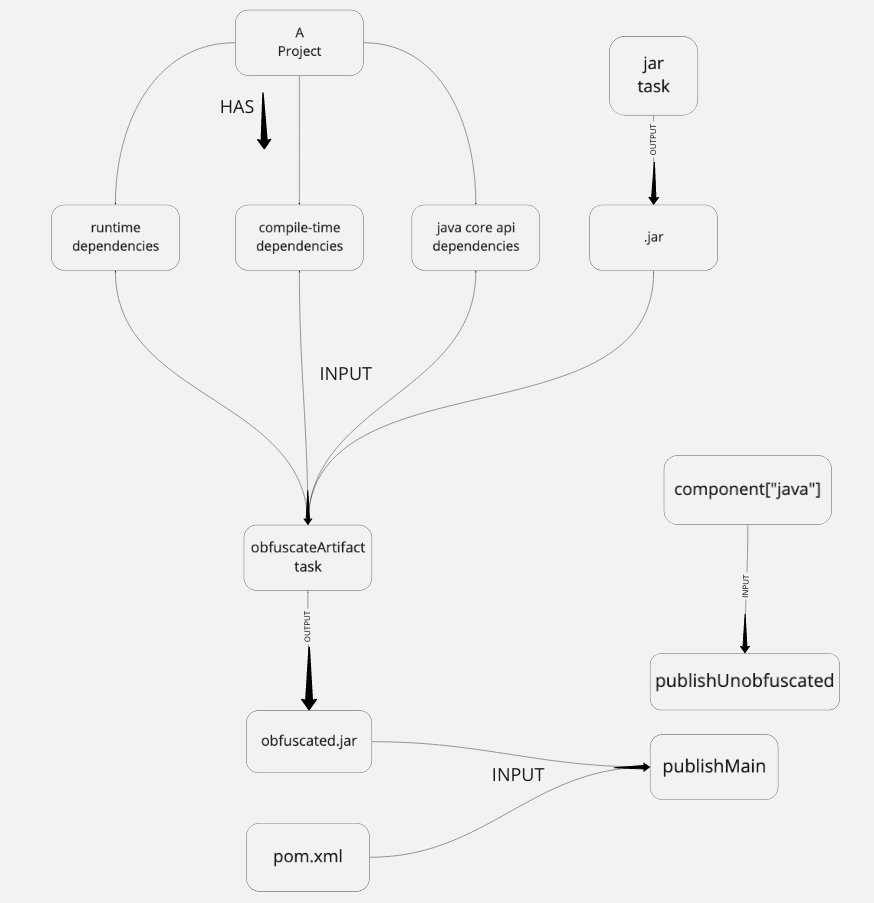 Handling back presses in Jetpack Compose

The Best Programming Languages to Learn in 2021