Photo by Robby McCullough on Unsplash

We have variables of different data types such as ints, chars, floats, etc to store data. We have arrays to group together a collection of data of the same data type.

But in reality, we will not always have the luxury of having data of one type. That's where a structure comes into the picture.

0. Memory Allocation of a Structure

When a structure variable of some type is declared, structure members are allocated contiguous (adjacent) memory locations.

Here, the memory will be allocated to name[20], followed by roll, gender and marks[5]. This implies that the size of the st1 or struct student will be the sum of the size of its members. Isn't it? Let's check. 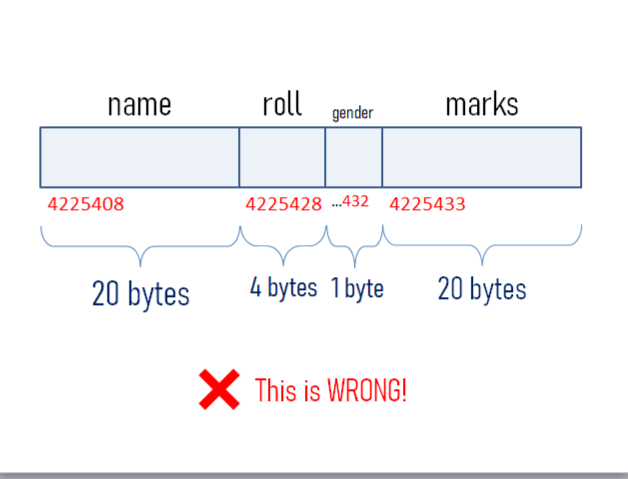 Before looking at data alignment, it is important to know how the processor reads data from the memory.

One way to achieve this is by aligning the data. Aligning means that a variable of any primitive data type of size t will always (by default) have an address that is a multiple of t. This essentially is data alignment. This takes place every time.

Aligned addresses for some data types

It may be required to insert some extra bytes between the members of the structure to align the data. These extra bytes are known as padding.

In our above example, the 3 bytes acted as padding. Without them, marks[0] which is of type int (address multiple of 4) would have its base address as 4225433 (not a multiple of 4).

You can now probably see why structures can't be compared directly. 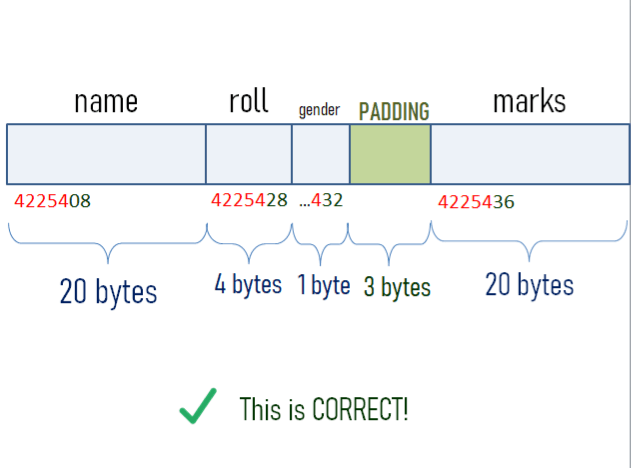 To explain this, we will take another example (you'll understand why).

What would be the output? Let's apply what we know. 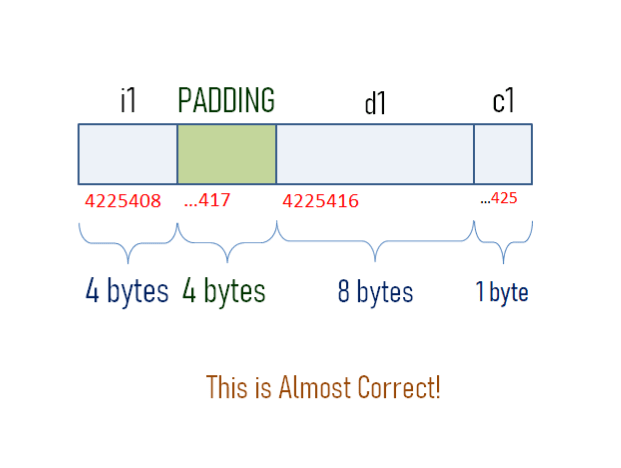 What? Wrong again! How? Through an array of struct example, we can understand better. We will also print the address of the members of example2[0].

To avoid such misalignment, the compiler introduces alignment to every structure. This is done by adding extra bytes after the last member, known as structure member alignment. 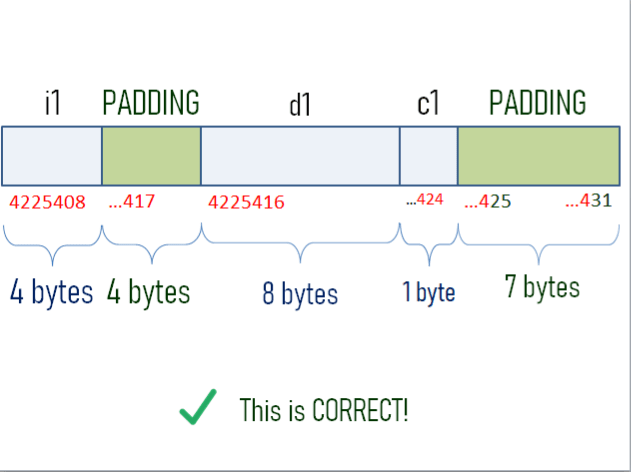 In the example discussed at the start of this section, it wasn't required ( hence, another example).

A simple way to remember is through this rule - Address of structure & structure length must be multiples of t_max. Here, t_max is the maximum size taken by a member in the structure.

For struct example, 8 bytes is the maximum size of d1. Therefore, there is a padding of 7 bytes to the end of the structure, making its size 24 bytes.

Though we can lower the CPU cycles, there is a significant amount of memory going waste. One way to decrease the amount of padding to a possible minimum is by declaring the member variables in decreasing order of their size.

If we follow this in struct example, the size of the structure reduces to 16 bytes. The padding gets reduced from 7 to 3 bytes. 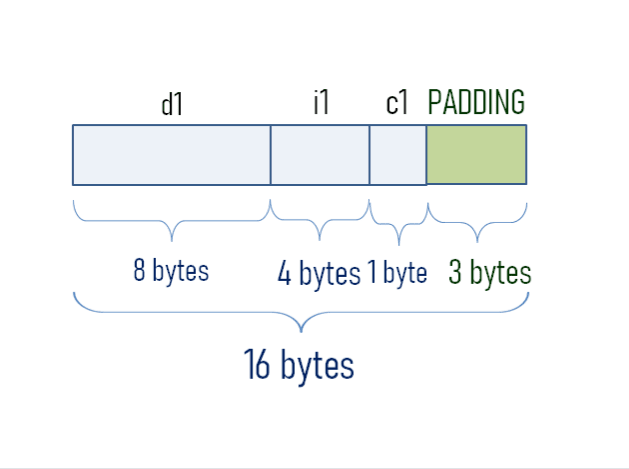 Packing is the opposite of padding. It prevents the compiler from padding and removes the unallocated memory. In the case of Windows, we use the #pragma pack directive, which specifies the packing alignment for structure members. 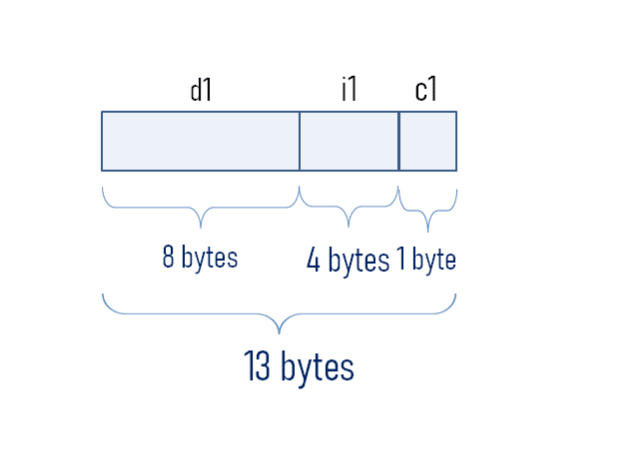 This ensures that the members are aligned on a 1-byte boundary. In other words, the address of any data type has to be as multiple of 1 byte or their size (whichever is lower).

Pointer as a Member

A structure can have pointers as members as well.

Using . (dot operator), we can again access the members. Since roll now has the address of alexRoll, we will have to dereference stu1.roll to get the value ( and not stu1.(*roll) ).

Like integer pointers, array pointers and function pointers, we have pointer to structures or structure pointers as well.

Here, we have declared a pointer ptrStu1 of type struct student. We have assigned the address of stu1 to ptrStu1.

We can access the members of stu1 using ptrStu1 in two ways. Using * (indirection operator) or using -> (infix or arrow operator).

With *, we will continue to use the .(dot operator) whereas with -> we won't need dot operator.

Similarly, we can access and modify other members as well. Note that the brackets are necessary while using * since the dot operator(.) has higher precedence over *.

We can create an array of type struct student and use a pointer to access the elements and their members.

We can use ptrStu_type1 with a loop to traverse through the elements and their members.

Function as a Member

Functions can not be a member of a structure. However, using function pointers, we can call functions using . (dot operator). However, it is not recommended.

message is one such function. We initialized eg1 with 6 and message. Then we use . to call the function using ptrMessage and pass eg1.i.

Structure as a Function Argument

Like variables, we can pass individual structure members as arguments.

Note that the structure struct student is declared outside main(), at the very top. This is to ensure that it is available globally and display() can use it.

If the structure is defined inside main(), its scope will be limited to main().

Passing structure members are not efficient when they are in large no. Then structure variables can be passed to a function.

Structure as a Function Return

We can return a structure variable, just like any other variable.

The function increaseBy5() increase the marks by 5 for subjects in which after increasing marks is less than or equal to 100. Note that the return type is a structure variable of type struct student.

While returning a structure member the return type has to be that of the member.

A structure pointer can also be returned by a function.

Self-referential structures are those which have structure pointer(s) of the same type as their member(s).

This is a self-referential structure where next is a struct student type structure pointer. We will now create two structure variables stu1 and stu2 and initialize them with values. We will then store the address of stu2 in next member of stu1. 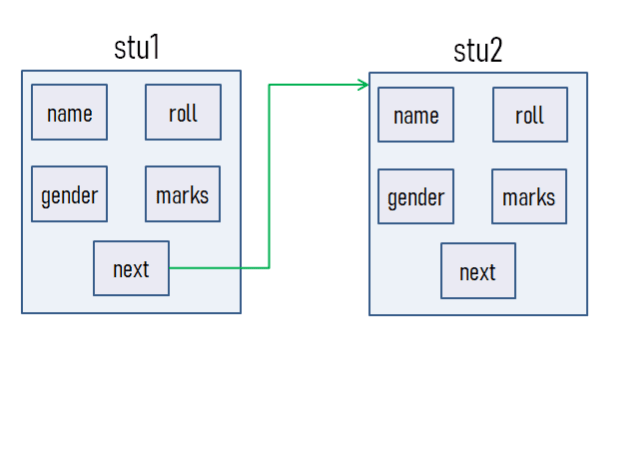 We can now access the members of stu2 using stu1 and next. 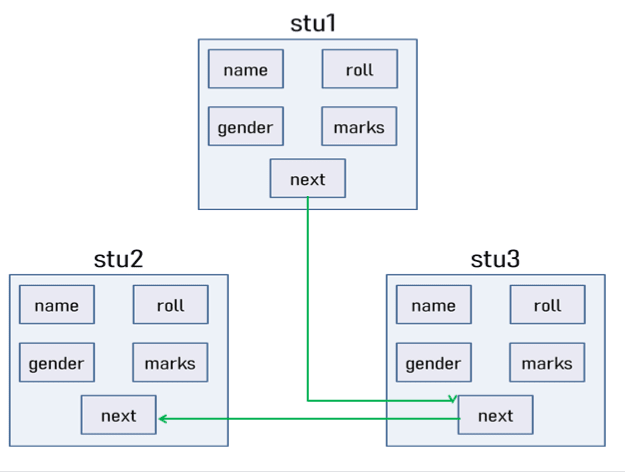 Notice how we have formed a link between stu1, stu3 and stu2 using structure pointers. What we have discussed here forms the starting point of Linked List.

The next step could be to learn more about the linked list and other data structures named above.

How to customize Windows Terminal