Hi, I'm Marian and I'm the creator of cow-pilot.io, a due date driven to-do list app written in ReactJS. In this post I want to share my journey from idea to launch of the public beta. 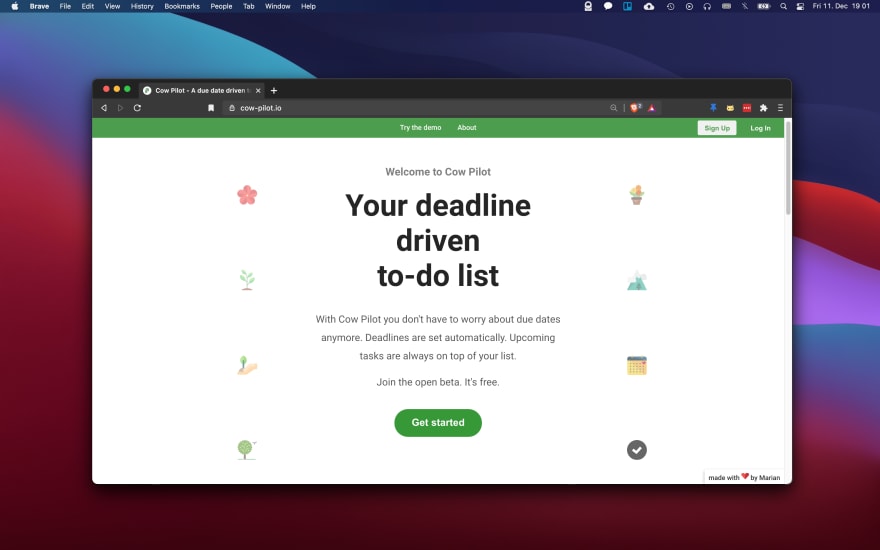 From Idea to MVP

There are lots of task management apps out there, Todoist being one of my favourites. My problem with most of them is that they are either too basic or have so many features that they become overwhelming and it's hard to find the task I'm looking for.

So I decided to build my own app. As a challenge I made a plan to finish the MVP within a week. With this approach I made sure that I only add what is absolutely necessary and don't fall into the trap of adding a bunch of stuff that does not really contribute to the original idea.

I wanted the MVP to have the following basic features:

No database, no login, just a teaser page, a demo and a signup link for the private beta.

I have a full-time job, so to finish it in one week I got up a 5am every day. That gave me 2-3 hours before I had to go to work and a little time in the evening before going to bed. It was the most productive week I had in a long time and I kept up this schedule until today. Turns out waking up early can be very easy when there is a good purpose.

After it was finished, I shared it on Hackernews, because I read that's where I have to go to validate an idea. I got 0 upvotes. Well, that was disappointing ...

I tried again the two days later and shared it on Dev.to. This post was a great success for me. I got a lot of feedback from the community how to improve the UI, fix some bugs etc. The reactions convinced me to keep working on my app. Around 25 people signed up for the closed beta.

Sending out invitations for the private beta

With 25 people on the waitlist it was time to start building a database and to add login functionalities. It took me a few more days to set up the Express server in NodeJS, link it to a MongoDB cluster and implement authentication with Auth0.

Once everything was finished I started sending out the invitations. I wrote a much too long email that most of my recipients probably did not even read.

Out of the 25 email addresses I had, 8 did not even exist and nobody replied. In total 2 users logged in once and never again. Another disappointment... In hindsight I would have written that invitation differently, but the response probably wouldn't have been much better.

Even though I experienced another setback, I kept working on my app. I started using it to track my own project, which gave me a lot of ideas how to improve it further. After almost one month of working on it a couple of hours every day I did not have much feedback except from my family and the Dev.to community.

So I decided to start the public beta and launch it on Product Hunt. 😀 If again I get zero feedback, maybe that means there are not enough people who are interested in a task management app like this.

I read a few guides what to do when preparing to launch on Product Hunt.

There's of course the official guide, but also posts like this one on Reddit that helped me a lot.

I was in the top 5 for while, but in the end came in 7th. I got around 500 visitors and 50 new users on Saturday. The traffic I received from Product Hunt did not go down until the middle of this week and I have already received very positive feedback and interesting questions from some of the users. This time around they are actually using it 😀

One week after starting the public beta I have around 80 users. I hope I can get more feedback, so that I can further improve the app. After making sure that the app is stable I want to start working on desktop and mobile apps.

While it is not a huge overwhelming success, it is slowly growing and gaining new users. It is such a rewarding experience to see that people are actually using an app that I have built.

I hope this little journey can help you staying motivated with your own side project. If you have any questions, just let me know here or on Twitter.

How I found a good opener for Wordle

Marian
Hi, I'm Marian and I'm the creator of https://www.cow-pilot.io
What I Learned in 120 Days of Indie Hacking
#devjournal #productivity #watercooler
A repository with more than 250 web development resources
#react #html #css #webdev
How do you structure your React projects?
#discuss #watercooler #react