Since I did not publish a report in February, I am doing a joint February + March post using a couple PRs I recently sent.

One of the things I like about elementary is the care taken with UX. For instance, for less experienced users pasting random commands in the terminal is a sensitive operation, specially if these commands involve administrative privileges. For this reason, elementary's terminal app shows a warning when the user pastes commands involving sudo or with newlines. 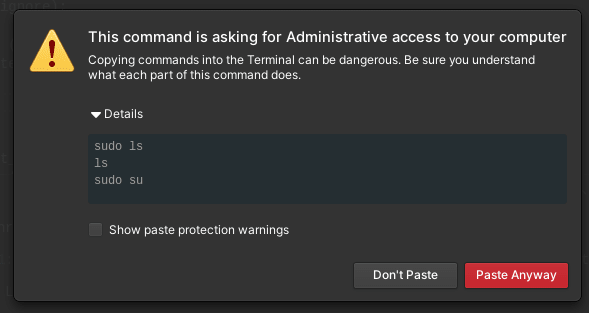 Two issues were raised with this dialog:

Although both seem like very simple issues, everything is done taking into account these small details. This contributes to the polished feeling elementary has.

Fixing the first was really simple: the paste protection dialog inherits from Granite.MessageDialog. This class has a method show_error_details that creates the small collapsible text box. I just needed to call it with the appopriate text and call it a day: PR #563. It was almost instantly approved.

The second issue was also simple: the dialog returns 1 if the "Paste Anyway" button is pressed and 0 if the "Don't paste" button is pressed. The code that checked if pasting should be cancelled was akin to if (response == 0). I'm not sure what pressing Escape returns, but I'm pretty sure that text should only be pasted if response == 1. So I changed the condition and now pasting works. This was done in PR #569.

An important point of both PRs is that they are very simple. I used these to emphasize the contributing does not require superior ultra coding skills, just some pacience and a little effort. There are many issues that are easy and up for grabs not only in elementary but also in many other projects.

If you decide to take this challenge as well leave a comment. Or if you need help finding easy issues in elementary ;) Or anything , really.

Once suspended, igordsm will not be able to comment or publish posts until their suspension is removed.

Once unsuspended, igordsm will be able to comment and publish posts again.

Once unpublished, all posts by igordsm will become hidden and only accessible to themselves.

If igordsm is not suspended, they can still re-publish their posts from their dashboard.

Once unpublished, this post will become invisible to the public and only accessible to Igor Montagner.

Thanks for keeping DEV Community 👩‍💻👨‍💻 safe. Here is what you can do to flag igordsm:

Unflagging igordsm will restore default visibility to their posts.