We all know this feeling. You spend your precious time to develop an awesome project, polish it to perfection, and carefully roll it out for your users.

And then they tell you:

My WordCloud app has 1.7M users and 5K reviews on Google Play. The average review score is 4.5★. This means that many users love the app, but some don't.

I used to dread bad reviews! First ones were a nightmare. I was scared to read all reviews in fear that there is a negative one. Upon seeing one, I used to spend days feeling miserable and unfairly judged.

But I couldn't feel miserable forever. So after some time developed these rules and I started to follow them.

When the review is constructive, I usually reply.

If they couldn't understand how to use a particular feature, I write an instruction for them.

It also helps other users who might experience the same problem. This is valuable feedback — maybe I should reconsider the feature or its UI if it is unclear for many people.

If they expected a feature that's not present, I explain it and promise to consider it in the future.

This doesn't mean I'll add the said feature. Perhaps, it doesn't fit my product vision, or maybe there are technical constraints. So I don't promise to implement — I just promise to consider. Still, this is valuable feedback, and sometimes these ideas are really good — even though they make me sad for a little while.

If the review is like "worst app ever!!111", I don't reply. There is no point in replying. I learned to grow thick skin against these types of reviews. Some people just want to be negative on the internet. It doesn't say anything about you, your product, or the quality of it. Some percentage of reviews will be like that anyways, for any app, however great it is.

Sometimes the only complaint is that some features in the app are paid.

To such reviews, I usually don't reply. I can't help the user in any way. This just means my product is not for them.

I only posted an answer once, and here it is: 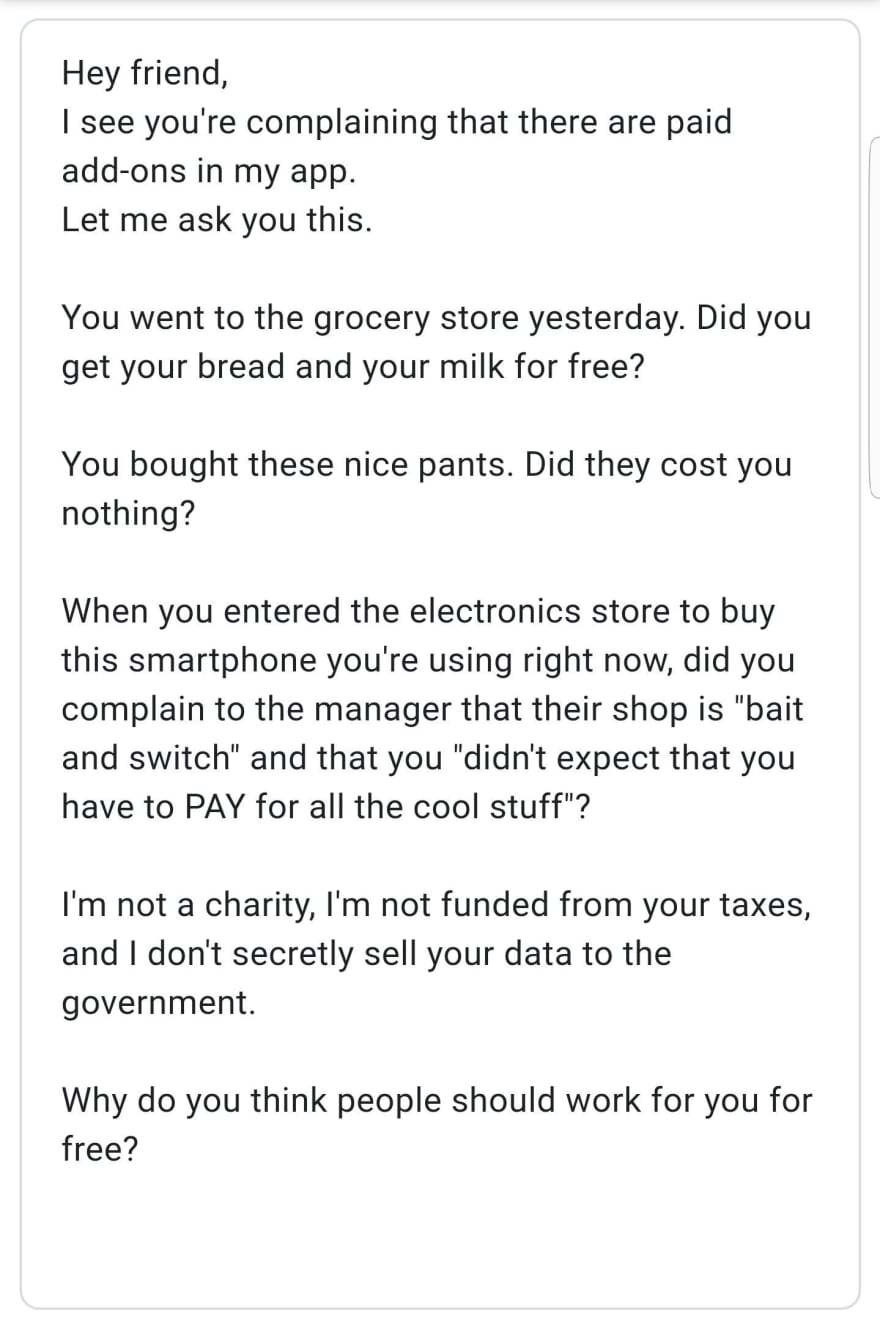 It warms my heart when people find my work useful!

To such reviews on Google Play, I usually reply "thank you" or nothing at all, since there are sometimes too many reviews — but I really do appreciate them.

I reply to all emails though. An email means that a person took time to message me personally, and I appreciate that.

I even got a physical present from a happy user once! That made me sooo happy!..

"This is not about my app" reviews

And now, a funny story. I sometimes get bad reviews that are about OTHER apps :).

There are a bunch of "impostor" apps that mimic mine. They have the same name and a similar UI, but are filled with lots of annoying ads and often don't work. So people download them, try to use, fail, get angry, and type the reviews for my app because it's on top in the Google Play when you search for "Word Cloud".

I even got a couple of emails from people using these impostor apps on OTHER PLATFORMS — such as iOS, while my app is Android-only. (So far.)

There is nothing I can do against these reviews, or these apps for that matter — Google and Apple don't help much in fighting them. I find consolation in the thought that my app is so great it's worth copying :).

How my world was destroyed

Azure Static Web Apps is production-ready: These are my 5 favorite things