Heya! The final part of this twitter bot series is here.

In the first part of this series, we've taken a look at creating a twitter bot in .NET that listens to particular tweets and retweets them. For the second part we created Api endpoints for it, so it now has the capability to change its tweet stream rules whilst listening at the same time. This final part is where we deploy our twitter bot to the Pi, lets go!

his is the link to the repo (here). It includes the previous changes as well as what will occur during the course of this blog.

In order for this to work, we will need a couple of things to have at hand:

Referring to the video for setting up an SSH for the Pi, her video pretty much applies the same to windows users, if you follow that you should be good to go on your Pi/SSH needs: that’s if you actually need to SSH, if you don’t and are fine with the full OS version then you can go ahead with that too 👍

The dockerizing part is really nothing new, it's just adding the dockerfile and a dockerignore to our project as seen in many tutorials. I came across a hiccup when attempting to pull an image for our twitter bot into the Pi but we'll work up to that point.

To start off in visual studio, we’ll first need to add the docker support to the project, and that is pretty much straight forward; right clicking the project and scrolling down the options to select the “add docker support” button. VS generates the necessary files for our docker process which are the dockerignore and dockerfile files: 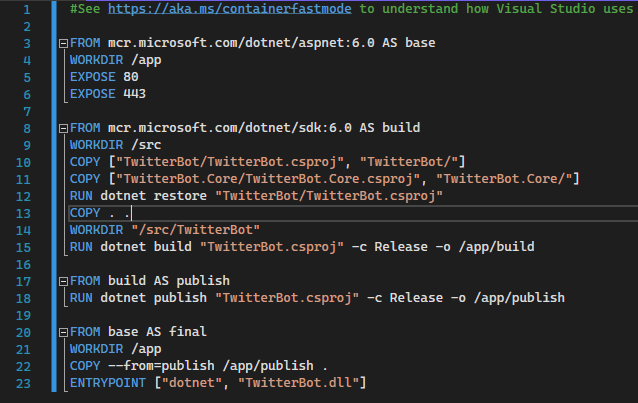 This can also be done in VS code, ensuring the docker extension installed, via the command (select the first option):

Once this is done, we are ready to start the build process and we do this by going to the terminal/cmd and cd-ing into our project directory. Because of the way the dockerfile looks for things, and how it sets up what current directory it looks at; I ensured that I ran the following docker command in the solution directory and not the individual project directory.

The command specifics can be found here. This command basically states to create a docker image named {username}/abtest-image which is based on the dockerfile located in the TwitterBot folder. The period at the end of the command is also a necessity as it states that we will execute this command in the current directory that we are in.

The previous command should build an image, however it has not been run in a container yet. The command to do so is this:

Here we can see that docker instructs (via docker run) the {username}/abtest-image image to run on port 8080 (via -p 8080:80). The port argument shows that the left side of the colon is 8080 while the right side is 80. The left side is what docker exposes to the outside world (the users - us) to appropriately talk to this container. The right side is for communication inside the container itself, something we wouldn’t need to look into too much for this project. --rm is simply an option to let docker know to remove containers once they have been stopped.

If we want to run this image in a container in the background and not have it hog the terminal, we can introduce the -d flag just after the run keyword in that same command above.

Now that we have test run this image in our OS, it’s time we talk about the potential nightmare we could’ve gotten into.

I ran into the hiccup stemming from after creating the dockerfile as instructed above, which is perfectly fine for what we’re currently running on. This file has various steps that include packaging the app into the image we need, however it relies on a base image to create our image from which causes compatibility issues down the line.

This is usually the first command in the file and it would probably look like this by default:

The problem is that this command doesn’t get an image which targets the correct OS version that our Pi runs on (remember when we mentioned to keep a note of the OS). This could result in a little mess down the line trying to figure out what this message means:

The crux of this states that we need to change that first line mentioned a little, depending on what platform we will be targeting. It looks like the platform is targeting the arm instruction set (based on the error message), but to find out what type our host platform (Pi) is running on, we can use the uname –m command in the Pi terminal.

This will give us one of two answers, either aarch64 (which means we’re on 64 bit) or armv7l (which means we’re on 32 bit). Once we find that, we can go to this link to find out what version of aspnet in that command we should be pulling down. For my case, it was 6.0.1-bullseye-slim-arm32v7 and I’d safely guess it could be yours too:

After this change, running this image in our current OS wouldn’t work as we’ve changed our target platform, but it will run on the Pi (have faith and stay the course!). Now that we have built up the image, it’s time to fling it off to the web!

Publishing the image to the hub 🚀

In order for us to publish the image to docker hub we will need to have a docker account. Given the steps mentioned at the start, we can safely assume this has been done already.

In our current terminal, we will need to log into to our docker hub:

A standard credential check will occur, after which we should be granted access to our account via the terminal.

Side note, the “docker.io” part was added to solve an issue I had with pulling from a private repo. I could have used “docker login” on its own and it would have worked for the steps later if I chose to have a public repo.

Anyway, once we’ve logged in, we can finally get to the juicy part which is pushing this image out there:

It does what it says on the tin. The image we created earlier will now be pushed into a new repo in the cloud with the same name. There might be some problems here as I have experienced, mostly to do with the naming convention of the image name. I found that pushing an image name without my username preceding it was not possible, it gave me errors stating “request to the resource is denied”.

I looked at the logs when attempting to push the image with that exact name and it seems to push to a directory that didn’t belong to me (if you know please drop a comment below 👍):

However, when I used my docker username and then followed by “/abtest-image”, the logging looked different and the push succeeded:

Check the web to see that the new repo is there and it should be 🙌.

Pulling the image from the Pi(moment of truth)

Once that is done, all that is left is to say these magic words:

It will do its thing, with regards to getting the image down from our remote repo and adding it to the list of images in our Pi docker. Check using the docker images for this list.

Once that is done, and the hiccup issue has been resolved, we should be able to run our twitter bot using the same command in previous steps:

Test it in the Pi for a final time to see if it holds and we should have lift off!

This was a fun project to take on, this three-part series saw me create a .NET twitter bot app which listens to specific tags I’ve pre-set and retweets those tags. We then went onto creating endpoints to change what the tweet stream should and shouldn’t listen to by exposing the “rules” end point. This led to looking at deploying this .NET bot onto the Raspberry Pi.

I’ve learnt quite a bit from this, I was able to enjoy some of the features of .NET 6 such as minimal Api. This was also followed by a refreshing and fun exposure to docker and how it can be used. I have some ideas for a bonus episode on how much a dockerized twitter bot in azure would rack up in costs. I have a feeling it wouldn’t be more than two burgers worth a month (let's hope it doesn't cost me a pretty penny!).

Thank you for sticking around and following my journey with this twitter bot, I hope to see you in the next project I decide to take on. PS: lookout for that possible bonus episode on exploring this bot with Azure 🚀

Perfectionism as a Programmer

What the hell is 👿 Hasura 👿