In the previous article I wrote about storing context menu action definitions in a scalable way using a Command Pattern (no more 1000 lines ActionService 🎉). In the showcase application I used dialogs that were loaded eagerly, which means all the dialog modules are being downloaded to the browser at once despite displaying only some of them most of the time. Let's fix it!

After this article ends you will have known how to easily manage dozens of dialogs that are scalable and independent of each other and the rest of the app.

A gif from the showcase application presenting dialogs sequencing:

Link to the article: 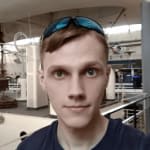 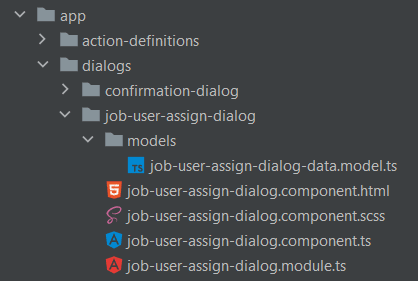 So far so good. We show a dialog using Angular Material's MatDialog Service:

Unfortunately, we have 2 problems with this approach:

1. All dialogs are bundled with AppModule

Now all the dialogs are bundled with main.js file, which results in downloading them all even if a user is on the page that doesn't use any of them at all!

In the expression .open(JobUserAssignDialogComponent, {data: dialogData}) the data field has type of any until we manually specify given type. This is very error prone, because it's extremely easy to mistype something or just not type something at all.

We need a method, which automatically matches dialog data interface with the dialog.

Just like in Action Definition's case from the previous article it would be wise to have a Dialog Service per each dialog module, so that we won't end up with one gigantic service.

First let's create a base class for a Dialog Service:

This class is mostly for typing consistency.

We also have to annotate it with @Directive(), because since version 10 Angular removes all types from constructor parameters of a class without a decorator and we need to inject MatDialog.

There is also 1 abstract method:

After creating a base class we can create a JobUserAssignDialogService:

The JobUserAssignDialogService inherits from AsyncDialog base class created before. In the 3 generic parameters we specify what component this service is responsible for, what it consumes and what it returns.

The magical part is await import('...'). This tells angular to fetch the module file if it has not yet been downloaded. Then after that we just open the dialog like we did before.

Note: We use async keyword, because asynchronous importing returns promise and we need to wait with opening the dialog until the operation completes.

The example below shows that a module file is fetched only when we click the action.

The gif shows that the dialog module is being fetched asynchronously, however, if we run ng build and take a closer look at the source code of the JobListViewComponent we can find JobUserAssignDialogComponent bundled with the app instead of on the lazy loded module.

Shouldn't the dialog component be lazy loaded? We have just downloaded the module lazily! What is going on!

It turns out the line responsible for this behaviour is the one which opens the dialog. But why?

If we analyze the import chaining (what imports what), we can draw the following graph:

From view Jobs view, where we invoke the action, to the dialog there are 3 imports along the way:

So in order for JobsComponent to be run by Angular it needs to have a dependency of JobUserAssignDialogComponent, because all along the way it was used as a value!!!

So how can we fix it?

Using as value vs type

First we need to understand some differences between value and a type:

In the example below we use a class as a value, which means it is still there after compiling to JavaScript.

In the example below we use a class as a type, which means it is completely removed from JavaScript with all of its imports.

Now we somehow need to use JobUserAssignDialogComponent as a value, but without importing it as a value. We can ask the module that we lazily imported for some help!

It's now the module's responsibility to import the component as a value, by having a static method called getComponent(), and returning it to us.

After that we can adjust the dialog service.

Et voilà! The dialog component is now bundled with the module, which is being loaded lazily.

What about component class used as a generic parameter AsyncDialog<JobUserAssignDialogComponent,...>? Fortunately, it is used as a type so it is completely removed in the compilation phase. 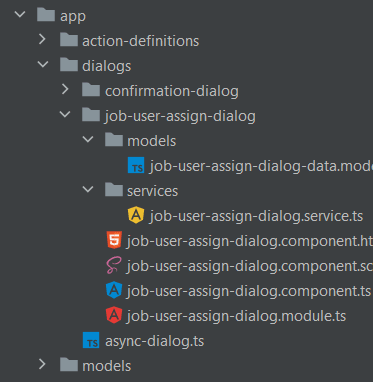 If we now add 50 more dialogs to our app and use them all in one view none of them would come immediately. It is handy in case some of them uses 2MB library that plays a violin while mining bitcoins at the same time. The view would be slim and light until we trigger the right action which in result would download it all.

Don't forget to remove Dialog Module imports from your AppModule

The GitHub repo can be found below as well as a StackBlitz demo:

During the last 5 minutes we've learned why loading all dialogs at once is not optimal. We discovered the problem why dialogs are bundled with main.js file. We've also understood the difference between using a class as a value and using it as a type. At the very end we implemented a solution for all dialogs to by asynchronous by lazy loading their module classes and using them as a proxy to get a component class reference, so that Angular can instantiate it.

I hope you are impressed as much as I was when I discovered it was possible :)

In the next article I will write something about Angular. Probably.

Generating video thumbnails with S3 and Fargate using the CDK