What is a thread?

Let's take another example consisting of basic coding problem. Suppose, we want to get the sum of the numbers in an array of length N. We can make this simple process of adding number multi threaded by associating 2 threads for summing them. One for the first half of array, and second for the other half of the array. And then sum the sum of two halves. Here the threads summing the both the halves are child threads and the thread having the final sum is called parent thread.

A process can have as many threads as required (limited to the hardware requirements, and efficiency overheads). Thus, it is clear that code, data, files belonging to a particular process will be common to all the threads in multi threaded process.

But each thread has it's unique thread Id, program counter, register set and stack memory as illustrated in following diagram: 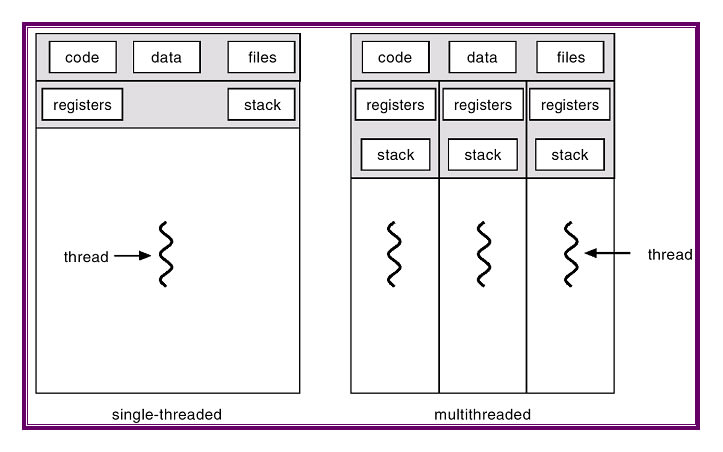 Why do we need multi threading?

What are the challenges of multi threading?

We would come across two terms very frequently, parallelism and concurrency. Generally, these two go hand-in-hand. But what exactly do they mean?

A system is parallel if it can perform more than one task simultaneously.

Concurrency is when more than one task makes progress. Even if the system is single core, the CPU schedulers rapidly switch between processes therefore making illusion of parallel system and thus allowing progress for different tasks.

Therefore, it is important to note that concurrency can occur without parallelism.

Many to one model 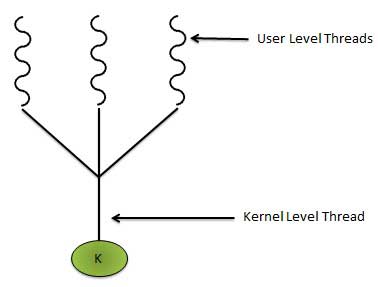 Many user level threads(threads created in application by user using thread library(explained later)) are mapped onto single kernel level thread. In this, there are following problems:-

One to one model 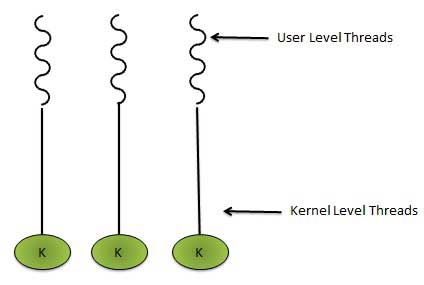 Single user level thread is mapped onto single kernel level thread. It has following advantage over many to one model:-

But it has a problem of overhead for creating as much kernel level threads.

Many to many model 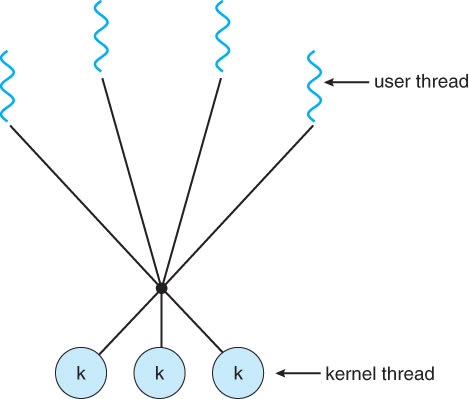 This model has a variant namely 2 level model which includes many to many as well one to one model. 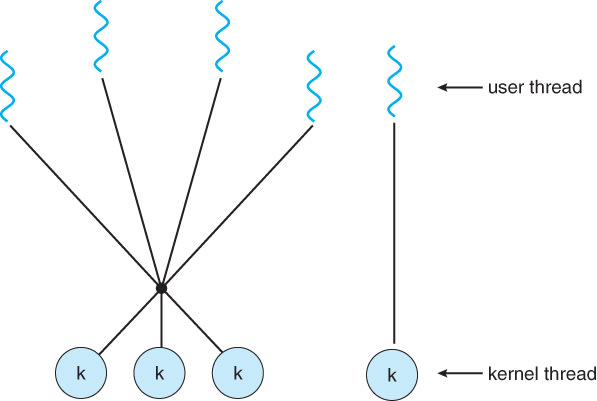 In this certain thread of a process are mapped onto a certain kernel level thread until it finishes it's execution.

Thread library is API for programmer to create and manage threads in their applications.

There can be two approaches for implementing thread library:-

There are 3 main thread libraries:-

There are 2 strategies for thread creation:-

JVM hides the implementation details of underlying OS and provide consistent, abstract environment that allows Java program to operate at any platform.

2 common strategies of implicit threading are:-

There were few difficulties while explicit threading:-

The general idea behind a thread pool is to create a number of threads at process startup and place them into a pool, where they sit and wait for work. When a server receives a request, it awakens a thread from this pool—if one is available—and passes it the request for service. Once the thread completes its service, it returns to the pool and awaits more work. If the pool contains no available thread, the server waits until one becomes free.

Finally, it's time to delve inside the issues while threading.

Whether all the threads of the process will be duplicated or it will become
single threaded after executing fork() statement.
exec() statement still almost works the same way i.e. program specified as
parameter will replace the whole process.

Signals are to mark any event while executing a process.
There are 2 types of handler:-

The thread which is to be cancelled is known as target thread.
There are 2 strategies for thread cancellation:-

pthread_cancel(tid) only requests to cancel a thread. Original cancellation depends on how target thread is set up to handle request i.e. deferred or asynchronous.

Threads belonging to a process share the data of the process. However, in some circumstances, each thread might need its own copy of certain data. We will call such data thread-local storage(TLS). Most thread libraries—including Windows and Pthreads—provide some form of support for thread-local storage. Java provides support as well.

For a user level thread to be executed, it has to communicate with kernel level thread. The scheme for this communication is known as scheduler activation. 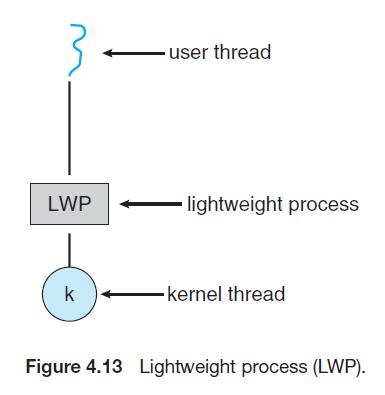 That's it for the basics of threading. Hope you had a good read.

6 Things Every Software Engineer Should Know to Standout