So how is Svelte any different from other frameworks like Angular, React, vue and why should we care? Let’s dive into that...

Svelte is a radical new approach to building user interfaces. Whereas traditional frameworks like React and Vue do the bulk of their work in the browser, Svelte shifts that work into a compile step that happens when you build your app. - Official Svelte Website

Svelte is a component framework which brings reactivity to JavaScript itself with less code and more magic. As per Svelte docs, it compiles HTML, CSS and JS code at build time into highly-optimized vanilla JavaScript code that runs in a browser with minimal framework overhead.

Knowing this, you might be wondering if Svelte is something you should consider. But there are still a lot of questions to be answered. So let's see why you should give Svelte a chance.

Svelte builds on lessons learned from its predecessors like React: Vue and Angular. But that's not the point. What makes it different is the approach it takes and the advantages it hence provides which could be subtle and prominent based on your unique use case.

Being a compiler and getting rid of the VirtualDOM is the most important advantage of Svelte that facilitates many of the other advantages we will see below. The concept is becoming more popular which means that your components are compiled to JavaScript and the DOM doesn't need to update. Also, it takes up little memory as it complies in highly optimized, small bundles of Javascript.

Svelte produces highly optimized vanilla JS with a very minimal overhead at runtime. This means small bundle sizes, a low memory footprint, and a blazing fast web-application. Check the performance benchmarks down below to see the difference.

With Svelte there is no need for complex state management libraries. The boilerplate required for components is very minimal and quite similar to vanilla HTML/JS. Svelte also supports optional two-way bindings making it easier to build forms.

Svelte brings reactivity to JavaScript itself where the DOM is automatically updated on state changes in any top-level variable on a component. Because of Svelte’s reactive nature, developers can write more concise code, which ultimately reduces the development timeline and cost. It also allows developers to implement the real business logic without getting stuck with code complexities.

Unlike React or Angular, the learning curve for Svelte is quite low and you can get started writing Svelte apps in about 5 minutes. Everything is written using standard-compliant JavaScript/TypeScript, CSS, and HTML with some additional syntax for directives and template logic. The component API is simple and straightforward. The Svelte documentation is also quite good and easy to follow and anyone with basic Javascript knowledge can easily get started with a Svelte project.

Svelte provides built-in animations and effects which makes it easier to build slick user interfaces and interactive visualizations. Well, the framework was originally created for building interactive graphics for The Guardian. This approach provides a much nicer developer experience than something like React and is way easier to use.

Here is a simple example in the offical Svelte tutorial which uses a transition effect:

Svelte provides both mutable and immutable reactive stores out of the box making it easier to do more complex state management in your application. The stores support manual and automatic subscriptions and two-way bindings making them very flexible.

Let’s see an example of a writable store:

Being a compiler, it is easy to change output targets without having to change your component’s code. For example, Svelte supports server-side rendering out of the box by providing a compiler mode for it (dom vs ssr). There is even a NativeScript integration for Svelte that makes use of this flexibility to produce targets beyond dom and ssr.

The advantages Svelte provides don't mean there are no downsides, every framework makes tradeoffs. The major downsides of Svelte are:

Because Svelte is quite new, it doesn’t yet have the kind of big community and developer fans that other frameworks enjoy. So you may not find as many tools or libraries as in React or as much help on Stack Overflow when you are stuck on some complex problem.

When it comes to developer tools and packages, there are currently limited options available for Svelte developers to choose from. But as the community grows and more developers start to find Svelte amazing, this problem will fade out.

Most companies are still looking for developers who are experienced with the major three front end frameworks but there are various, well-known early adopters of Svelte like IBM, Apple, Philips, GoDaddy, 1Password or The New York Times, just to name a few. You can find an extensive list of companies who are using Svelte at the bottom of the Svelte website.

Nevertheless, Svelte is fun to learn and many developers enjoy using Svelte especially for their own personal projects or small scale applications.

Comparisons to other frameworks (Level Of Use + Performance)

Asking you to start using Svelte in production is a lot, I know. So let's begin by outlining the reasons why you won't regret making this decision.

Level Of Use: Svelte, Angular, React and Vue.

If we look at the 2022 Developer Survey results:

The results show that Svelte has become a top performer in 2022 which is exciting! 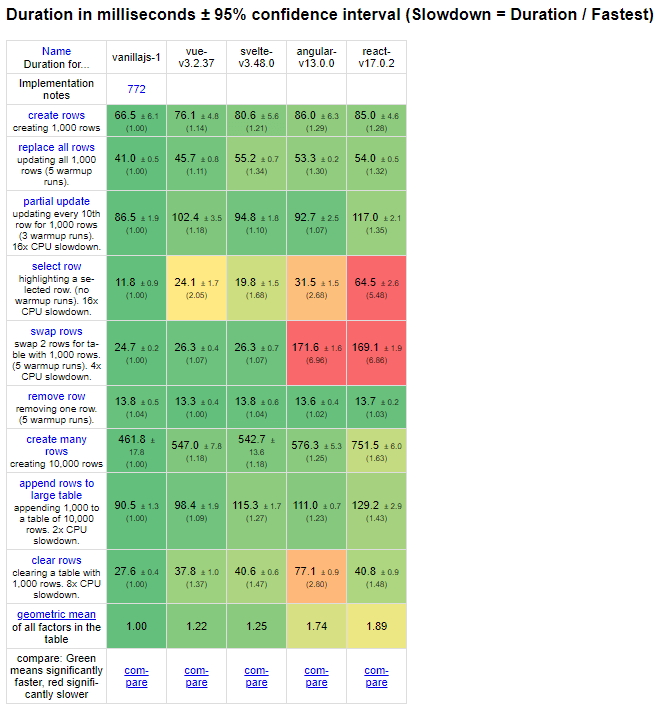 In terms of speed, Svelte and Vue are quite similar and indeed the top performant in this category with Angular and React just behind. At the bottom of the table, we can see something called Geometric mean. The geometric mean is an indicator of overall performance and speed by a framework. From this, we can conclude the following category ranking: 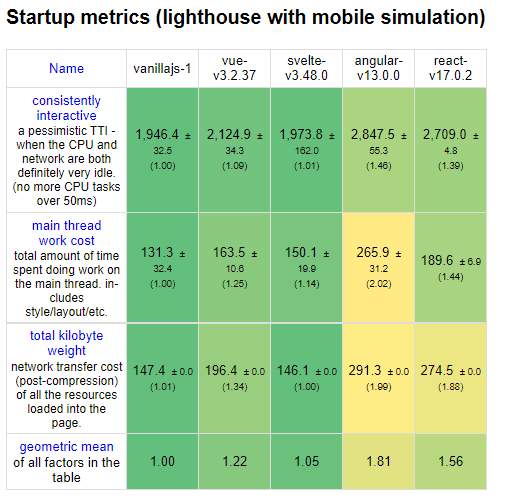 As you can see, Svelte performs very well. Vue.js a little less so, with React and Angular are just behind. From this, we can conclude the following category ranking:

The memory test sees which framework takes up the least amount of memory for the same test. Let's jump into the results. 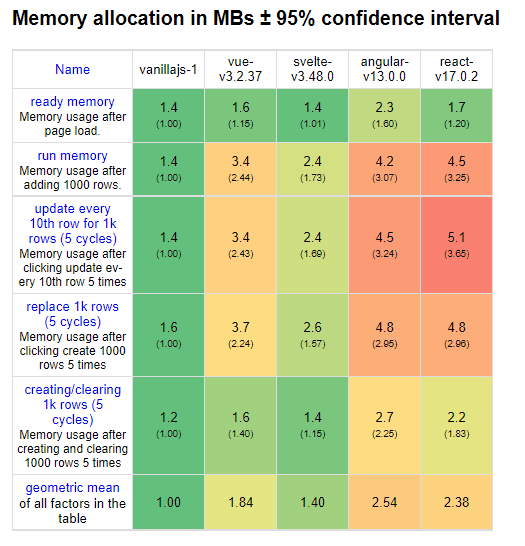 Again, Svelte is clearly on top. Vue and React are just behind while Angular (once again) is the least performing. From this, we can derive this category ranking.

Without a doubt, the pros of using the Svelte framework outweigh the cons. Now Svelte might not be the perfect solution to every single problems you may have as a developer but it has a lot to offer. And if you are feeling adventurous, I’d recommend you also look at how Svelte works.

Confidence In Economic Storms (and Other Stressful Metaphors)

Once suspended, hr21don will not be able to comment or publish posts until their suspension is removed.

Once unsuspended, hr21don will be able to comment and publish posts again.

Once unpublished, all posts by hr21don will become hidden and only accessible to themselves.

If hr21don is not suspended, they can still re-publish their posts from their dashboard.

Once unpublished, this post will become invisible to the public and only accessible to Helitha Rupasinghe.

Thanks for keeping DEV Community safe. Here is what you can do to flag hr21don:

Unflagging hr21don will restore default visibility to their posts.