From Wikipedia, Reactive Programming is “a declarative programming paradigm concerned with data streams and the propagation of change.”

The programming model is complex to master. It requires a lot of experience to feel comfortable with it. However, there’s no denying that it fits the cloud ecosystem perfectly. Since on-premises infrastructure is oversized, running a program that executes a couple of additional CPU cycles won’t change anything. On the other hand, you will pay for them if you host the same program on third-party infrastructure. Depending on the number of those cycles, and the number of nodes the program runs on, it can make a huge difference in your monthly bill.

In this post, I’d like to showcase how you can migrate a traditional sample Spring Boot application to the Reactive model one step at a time.

The application to migrate

The application to migrate is a Spring Boot application based on Java 14. It includes the following:

It’s a simple sample that offers 2 endpoints, one to read all entities of a database table and the other to load one by its primary key. In order to improve performance, Hazelcast is used as the 2nd-level Hibernate cache.

This caching requires com.hazelcast:hazelcast-hibernate53:2.1.0 as a dependency, as well as the following Spring Boot configuration:

For exhaustive documentation on Hazelcast and Hibernate integration, please refer to the GitHub project.

Here’s a sample that uses the more specialized @RestController and @GetMapping annotations, but the intent is the same:

For the record, this annotation-based configuration is available since Spring WebMVC 2.5 – released in 2007! It has become the de facto standard. But version 5.2 introduces an alternative, WebMVC.fn.

WebMVC.fn eschews annotations, and the additional hurdle of classpath scanning and introspection that come with them, in favor of an explicit “functional” fluent API. Actually, it’s a clone of the Reactive API in a different package. For this reason, migrating to WebMvc.fn is a good first step.

A core concept in WebMVC.fn is the route. A route associates a path, and more exactly a path pattern, and an HTTP method pair to a function, which represents the code to execute when a call to that particular pair has been triggered. 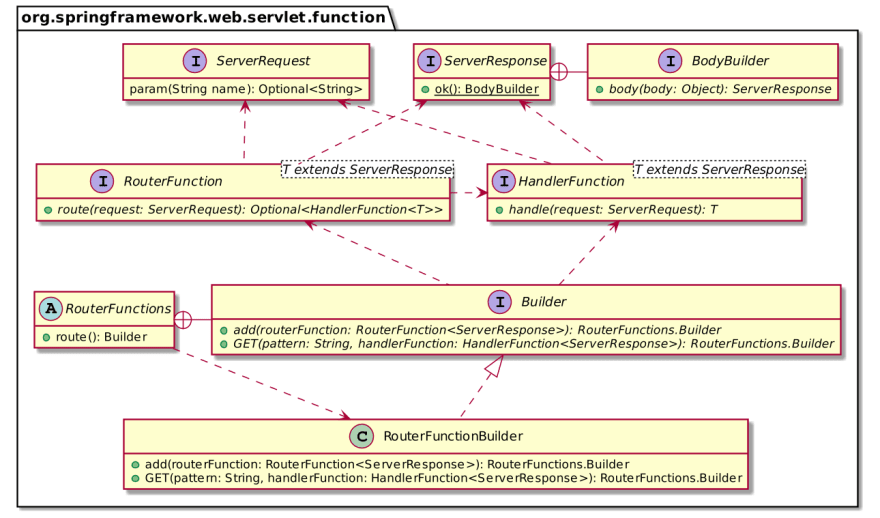 The getAll() method can be rewritten as:

Likewise, getOne() can be rewritten as:

Note that the two above methods should contribute their return value to the Spring context. Hence, they both need to be annotated with @Bean in a @Configuration-annotated class.

In Kotlin, you can use the Kotlin Bean DSL to achieve the same, without annotations.

As its name suggests, Spring WebMVC follows the Model-View-Controller pattern.

The Controller should be dedicated to routing, while the Model should contain the business logic. Both extracted methods contain both routing and business logic – even though the sample code’s logic is very simple. In standard applications, this would probably be more complex.

Spring’s proposal is to extract this logic into a class called a Handler. There’s no specific requirement for a class to be a Handler. Here’s the extracted class:

Routing methods can now be rewritten to use the above Handler class:

Because those are @Bean-annotated methods, the framework will call them at startup-time. It will also provide the required PersonHandler bean, provided there is one. Hence, you need an additional method:

Having a dedicated method per route can quickly lead to an explosion of such methods. The route-creating API allows us to define multiple routes.

Let’s merge the two methods above into a single one:

Merging routes together, and deciding which ones, is directly related to how you want to architect your code. It can be one method per route, one per endpoint, one per module, etc.

Step 4: Migrate from WebMVC.fn to WebFlux

At this point, our efforts were directed at making the code functional, not reactive. However, as I mentioned before, the reactive API maps one-for-one to this functional approach. Now the time has come to start migrating to reactive. We will start with the Controller layer.

Note that the return type should be changed from plain ServerResponse to the reactive Mono<ServerResponse> type. Now, the code compiles again!

Mono comes from Reactive Streams, a specification that focuses on Reactive Programming, and completely agnostic to the underlying language. In the Java ecosystem, Project Reactor is an implementation of Reactive Streams. The API defines the following building blocks: 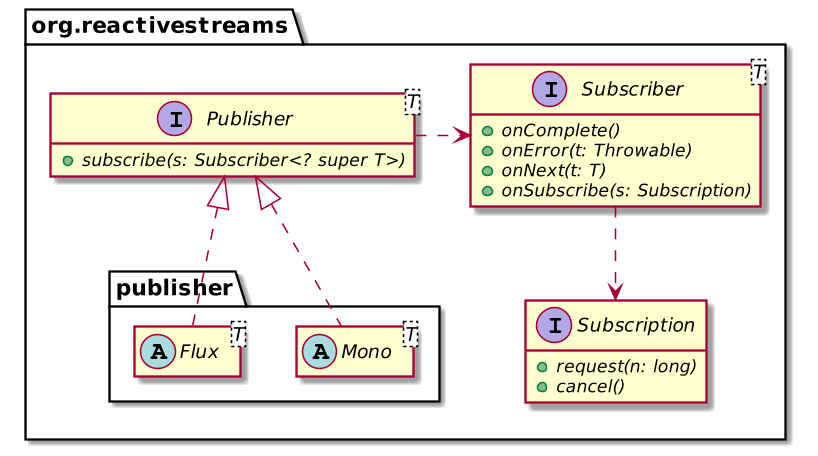 At this point, the application still relies on JPA, which is blocking. As soon as you introduce a single blocking call in a reactive processing pipeline, it makes it blocking.

Hence, the application is blocking despite our efforts. In order to go further, we need to make the whole processing pipeline reactive. This includes data access code.

Step 5: Migrating from JPA to R2DBC

As mentioned above, JPA is blocking. The specification was designed at a time when the cloud was not as widespread as it is now, so that a reactive API was not included.

Hibernate is the default JPA implementation in Spring Boot. There’s an on-going initiative to make Hibernate reactive. So far, Reactive Hibernate supports PostgreSQL, MySQL, and DB2. It has some limitations, for example, it does not support the query cache. Also, one should ensure that all calls to the 2nd-level cache implementation methods are non-blocking as well.

Another alternative is to forego JPA/Hibernate/JDBC entirely and rely on R2DBC instead. In its own words:

Using R2DBC changes the return type of our repository methods:

For methods that are generated at runtime via Spring Data, we only need to adapt the Handler code.

Compared to WebMVC.fn, WebFlux introduces a BodyInserter interface. As its name implies, a BodyInserter is responsible for populating the body of an HTTP response. A utility class, BodyInserters, provides inserters for the most common use-case e.g. empty body, form data, publisher, etc.

Because Mono and Flux are Publishers, the BodyInserters.fromPublisher() method can be put to good use. The updated code is:

By default, Spring Boot detects the presence of the JDBC driver and creates a default data source based on it. With R2DBC, Spring Boot populates a bean of type ConnectionFactory in the Spring context.

Also, Spring Boot configures Hibernate to automatically read JPA entities and create the SQL schema from it at startup time. Additionally, the Spring Boot Data JPA starter allows you to provide a data.sql file that’s executed at start-up time to populate the database. By migrating to R2DBC, we lost both features.

We need to provide a schema.sql file. We read it, as well as the previous data file, and execute both of them explicitly when the application starts.

Step 5.1: Make sure no call is blocking

As stated above, a single blocking call in a reactive pipeline makes it… blocking.

To ensure that no call is blocking, there are several ways. The first step is of course code reviews. Healthy engineering teams practice code reviews to improve the code that is committed and to make less experienced team members learn from the more experienced ones. This remains a manual process, and like every manual process, it has varying degrees of success that depends on human and organizational factors.

To make this check bullet-proof, Project Reactor provides the BlockHound library. BlockHound is a Java agent that can be started along with the application, and that throws an exception when it detects a blocking call.

Using BlockHound is a two-step process:

Schema creation and data population are not the only features that we let go of. By leaving Hibernate behind, we also lost its 2nd-level cache at the same time! It’s time to add it in a more manual way.

Let’s first add a cache bean to the Spring context:

Note that the HazelcastInstance is already existing in the context, because Spring Boot takes care of starting it for us, either using a hazelcast.xml configuration file, or a Config bean that we provide. For more detailed information, please refer to the Spring Boot documentation.

Let’s now introduce a CachingService between the controller and the repository.

There’s a catch, though. The get() and put() methods from Hazelcast are blocking: we introduced blocking calls again! If you’ve installed BlockHound in step 5.1, launch the application, and check call the endpoint, this will be apparent:

The next step is about fixing that.

Hazelcast API offers traditional blocking methods, but non-blocking one as well, in the form of the getAsync() and putAsync() methods. However, it’s not enough as we need to know whether an entity is in the cache to decide to return it or load it from the database.

Mono offers the switchIfEmpty() method to design this behavior into the Reactor API. Its usage is the following:

Reactive Programming allows you to optimize the usage of a server’s resources. It comes at a cost though: learning a new specific API.

In this post, we described how you can mitigate the risks of migrating to Project Reactor by following a step-by-step process:

We also saw how to ensure that the whole call stack is entirely reactive with BlockHound.

The demo application for this blog post is available on GitHub.

Many thanks to my friend Oleh Dokuka for his detailed and relevant review!

Convert entity to DTO in Springboot

Is Python or Java a better language for scaling as your web app grows in size?

Once suspended, hazelcast will not be able to comment or publish posts until their suspension is removed.

Once unsuspended, hazelcast will be able to comment and publish posts again.

Once unpublished, all posts by hazelcast will become hidden and only accessible to themselves.

If hazelcast is not suspended, they can still re-publish their posts from their dashboard.

Thanks for keeping DEV Community 👩‍💻👨‍💻 safe. Here is what you can do to flag hazelcast:

Unflagging hazelcast will restore default visibility to their posts.