Working alone is great... but... I am so tired of dealing with all of these.. these shitty uninspiring, repetitive, tedious tasks...

I didn't realize how many emails I had to reply to and how many invoices I had to make on my own. How many tasks do I have to manage and schedule?!

I need something stabilizes me all the time no matter what happens to me. Maybe I need a manager. Manage me! (Funny to say that because I left work to not be managed by others.LOL)

For a sec, I think about hiring somebody, but I don't have money for that.(of course)

So here is my attempt to create my personal assistant with discord and notion API and, what I learned from this project.

If there is anything incorrect, please let me know. I'd love to learn from you!

The first thing in my head to create a chatbot is how a chatbot analyze the intention of my text. People say the same thing in various forms of expression

I can write the code like if( text.includes('how are you') ) for every expression, but how inefficient would it be? This is the time when NLP is useful.

Natural language processing (NLP) is the ability of a computer program to understand human language as it is spoken and written -- referred to as natural language. It is a component of artificial intelligence (AI). NLP has existed for more than 50 years and has roots in the field of linguistics. from techtarget.com

While I still don't fully understand how NLP works, my understanding is so far like this.

Among multiple different services to provide NLP, I chose to use wit.ai service, which is an open-source service developed by Facebook, Meta.

The useful thing about wit.ai is chatting text I sent by discord also showed up on the wit.ai training session, so even if a bot failed to understand what I meant, I can always go to wit and correct it.

The downside is documentation is not so clear, so... anyway... it's alright. I will take it...

In the end, I chose to create a discord bot over a Slack bot even tho I am not really a discord user.

Some servers I joined to get help usually has too many channels on the sidebar, and too many discussion is going on. It just intimates too much. Like you entered in a club and see full of people dancing a Michael Jackson thriller perfectly, but I don't know that damn dance. "Quick, get out from that club!"

Anyway, during this project, I could learn about discord.js and at the same time a little bit more about discord itself...

The exciting thing about discord js is it gives so many options to interact with other users. Can create buttons, slash commands, interact with emoji etc.. way more than just sending a message.

The most useful message type is Embed Message. 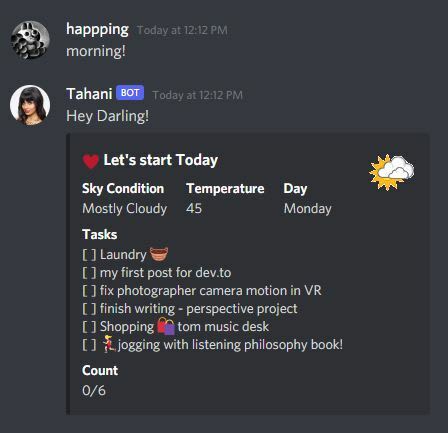 ( I set my coordinator as Tahani from the TV series 'The good place' because I love her character on the show so much. so jolly!)

Embed message returns the beautifully formatted information. You can directly add the field like this.

or you can create the dictionary and loop for each keys

I love notionHQ. Actually, I am obsessed with it. I've been using it since it was not the mainstream. Recently I heard it acquired automate.io. Alight, NotionHQ, Let's go! Bigger and bigger! But there were a few moments.. when I was considering leaving Notion... it's because Notion doesn't have a recurring task option!

I left the Notion and came back again over and over, like a troubled teenager arguing with a parent. A year ago, Notion released notion API; "This is the final, guys. I am going to build an automation system for you and going to be with you happily ever after 4everr."

Notion API is great! but unfortunately, there are a few limits for (v1.0.3) right now.

so for example, if there's a notion block like this 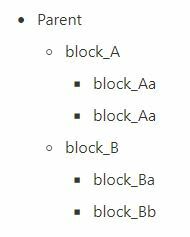 If you want all the children under parent, there's no other way than keep asking children if they has grand-grand children…

All i want is block to save the code so I can run it by ‘eval()’ which can be just any text block. Just not pretty as I wished, that’s all. Haha 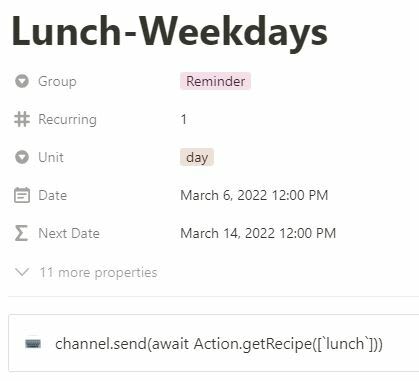 4. I learned about Cron

One of the must-have features for the coordinator bot was sending scheduled messages, so I can do the task on time.

A CRON expression is a string comprising five or six fields separated by white space[16] that represents a set of times, normally as a schedule to execute some routine.
from wikipedia

***??... Another regular expression all over again.. horror.. But actually, the breakdown of cron time is pretty simple, min + hour + date + month + week.

Now I should generate cron time by ‘Date()’. This time, instead of writing in js, I wrote as notion built-in formula so even if I update the schedule by notion, the clon time value also can be updated at the same time.

Such a ugly code, for now but so far it seems working as wish. (full code is on my repo)

While I can create a new scheduled event by Notion, I wished to create the new reminder by chat as well. Luckily Wit.ai has built-in entities called "duration" and "datetime", such a lifesaver! 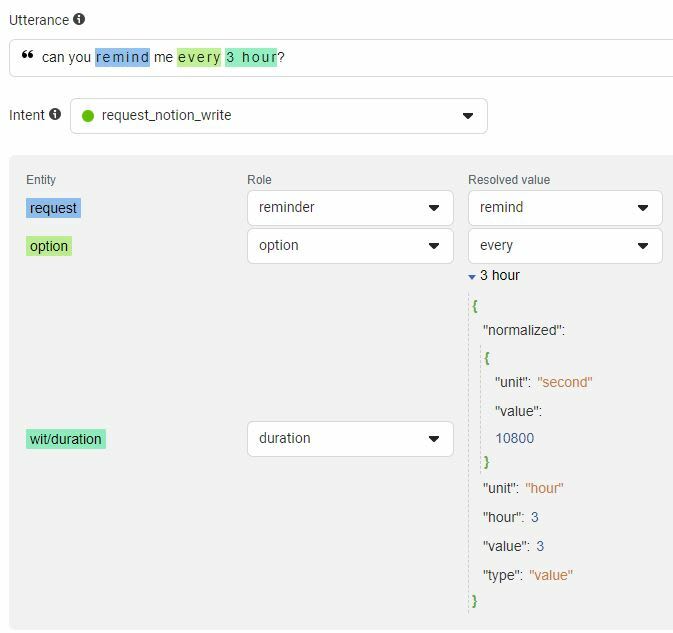 I started to feel more greedy and needy. Hey, bot, you can give weather and different time zone time, my today's tasks and project due date now.. how about.. recommendation for today's meal?? M.M.M

So instead of food API, I decided to fetch the information directly from my favourite cooking site. I heard the Puppeteer is good for web scraping, I always wanted to try, but this is my first time trying Puppeteer!

Puppeteer is such an amazing package, but there were a few confusing parts though.

When I tried to get element by document.querySelector() .this returned undefined or null object. I was panicked, and I thought Puppeteer failed to find the element, but it's there.. when I specifically ask textContent or src, href?

As I understand is what Puppeteer gives me is not an HTML element but something else.. ( is there anybody explain a bit easy for me? i am helpless lol)

Anyway, now I get a recommendation for a recipe. yay 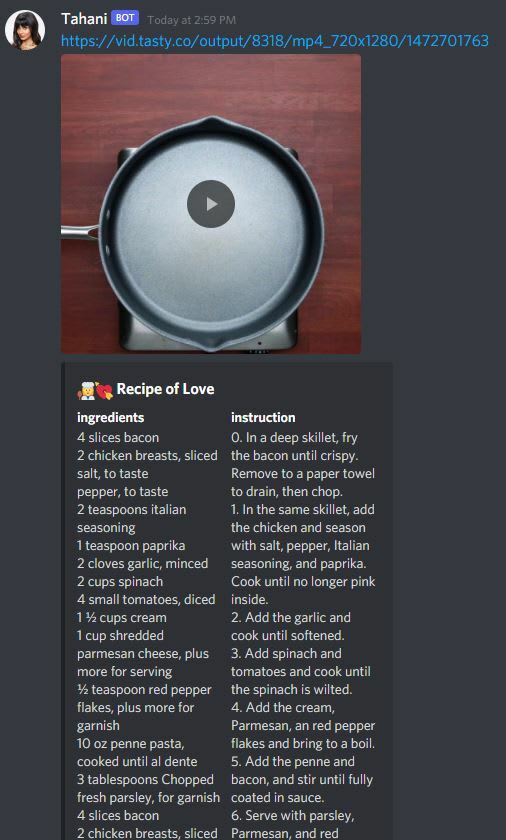 Because my bot will be deactivated when I don't run bot.js, I needed Heroku to serve it on the cloud.

While I am hosting my sites on Netlify, I am still not familiar with the hosting service. I misunderstood Heroku and Netlify as the same kind of service, but this time, I learned they are not. Like this whole post is such lack of professional knowledge, this is my short understanding about Netlify and Heroku so far

Dyno is a container that runs the command in Linux. The busier the app will be, the more dyno is required to be purchased. Because I am a free user, I have a single dyno.

Free user has 1000 free dyno hours. It means that even if my app runs consistently without resting for the whole month, it wouldn't get over 730 hours. Free is always good. It makes me feel cosy.😊 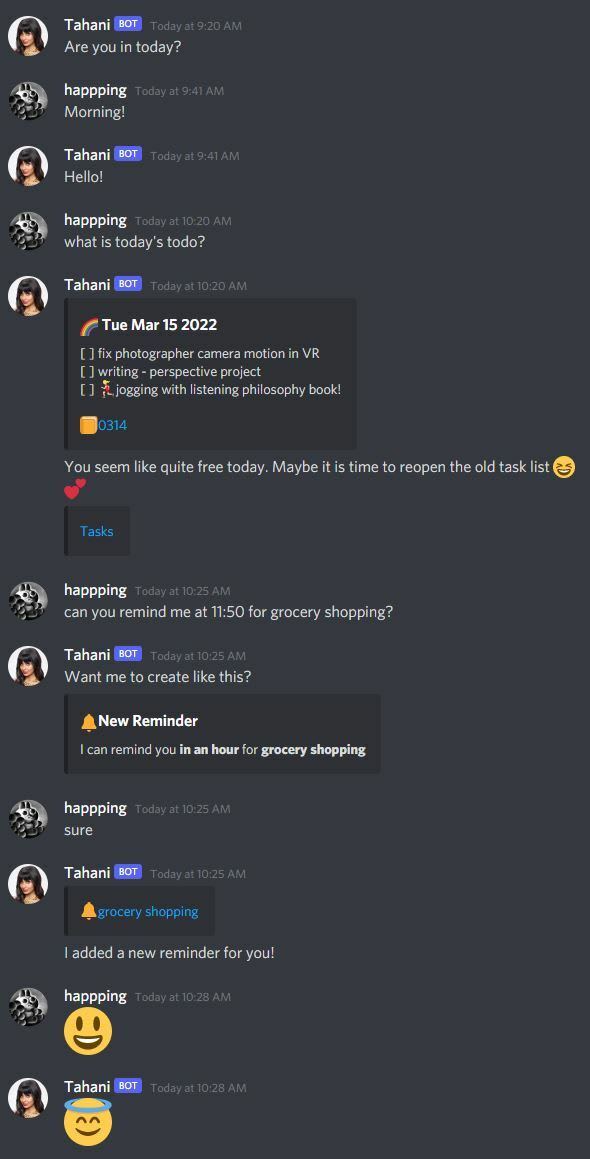 While I want to improve more and add more features, my Tahani bot works quite wonderfully right now. Great to have a companion! (sad to say that. lol)

I tried a lot of new things this time, I learned so much; however, I also feel like I didn't spend enough time to learn about each of them more precisely. Maybe that's what I'm going to do with next dev.to

Besides having a customised virtual assistant for my daily routine, the knowledge I earned was so valuable. There are so much potential to improve my interactive character project
Thank you for reading this messy post. I am not a trained developer (I a visual artist), but I am very excited to share thoughts and get to know more about creating something cool.

Please comment on anything if you want to correct my post and educate me. It would be awesome to learn from all of you!

Node.js vs Ruby on Rails: Which One is the Better Choice for Your Website?

Once suspended, happping_min will not be able to comment or publish posts until their suspension is removed.

Once unsuspended, happping_min will be able to comment and publish posts again.

Once unpublished, all posts by happping_min will become hidden and only accessible to themselves.

If happping_min is not suspended, they can still re-publish their posts from their dashboard.