Nine years ago, in March 2013, Solomon Hykes and his cofounders revolutionized how we do software development with an open source platform called Docker. Although the creators of Docker didn't invent containers, they popularized them. Thanks to Docker, engineers can create tools, like GitHub Codespaces, that enable us to code in a development container hosted in the cloud.

I’ll admit that when I first heard about development containers, I had two questions:

If you have similar questions, this post is for you.

In this blog post, I'll explain what containers are, how they benefit engineers, and how to setup devcontainers in GitHub Codespaces.

What does it mean to develop inside a container?

Raise your hand if you’ve ever uttered the words, "It works on my machine." (Don’t worry; you're not alone)!

If you're not familiar with this phrase, it's a meme, but it's also a real phrase developers find themselves saying if they work in a codebase where the environments vary. Although working in varying environments is not ideal, it does happen. From my experience, situations like this occur when my local environment, my coworkers' local environments, staging, and production all have slight differences. Because the environments had slightly different configurations, bugs existed in one environment but didn’t exist in the other environment. It can feel so embarrassing and frustrating to build a feature or fix a bug that works locally but doesn't work in production or staging.

However, containers solve the issue of inconsistent developer environments. Containers enable software engineers to program in a consistent environment. Now, your coding environment can mirror production by using the same operating system, configurations, and dependencies. This ensures bugs and features behave the same across all environments relieving developers from the embarrassment of saying, "It works on my machine."

Now that we understand the purpose of containers, let’s explore how Codespaces leverages containers.

GitHub Codespaces takes software and cloud development to the next level

GitHub Codespaces allows you to code in a container hosted in the cloud. In this context, the cloud is an environment that doesn't reside on your computer but rather on the internet.

Typically, software engineers are responsible for setting up their local environment when they join a team. Local environment setup includes installing the required dependencies, linters, environment variables, and more. Developers may spend up to a week configuring their environment, depending on the quality of the documentation. When I was purely a software engineer, it took me about 2 days to set up my environment, and the experience was painful because I wanted to start coding immediately. Instead, I had to seed my database and edit my .zshrc file.

Fortunately, organizations can automate the onboarding process using GitHub Codespaces to configure a custom environment. When a new engineer joins the team, they can open a codespace and skip the local environment setup because the required extensions, dependencies, and environment variables exist within the codespace.

With Codespaces, I can code anywhere that I have internet access. If I switch devices or forget my laptop at home, I can easily resume my work on an iPad while I’m on the plane without cloning a repository, downloading my preferred IDE, and setting up a local environment. This is possible because Codespaces opens a Visual Studio Code-like editor inside the browser. The best part is Codespaces can autosave my code even if I forget to push my changes to my repository.

Three files you may need to configure a Codespace

You can leverage three files to make the Codespaces experience works for you and your teammates: the devcontainer.json file, the Dockerfile, and the docker-compose.yml file. Each of these files lives in the .devcontainer directory at the root of your repository.

The devcontainer.json file is a configuration file that tells GitHub Codespaces how to configure a codespace. Inside a devcontainer file, you can configure the following:

You can learn more about the devcontainer.json file here.

The Dockerfile is a configuration file that tells GitHub Codespaces how to build a container. It contains a list of commands that the Docker client calls while creating an image. Dockerfiles are used to automate the installation and configuration of a container. For example, if I wanted to install Node.js in a container, I could add the following to my Dockerfile:
Dockerfile

Codespaces is not the same as GitHub’s web editor

GitHub Codespaces is not the same as GitHub’s web editor. The web editor is the editor that appears when you press "." in a repository. It is a lightweight editor that allows you to edit files in your repository. The web editor is great for making minor changes to a file, but it’s not ideal for writing and running full stack web applications. This is because the GitHub web editor does not have a terminal. However, Codespaces allows you to run a full-fledged IDE in the browser equipped with a terminal and more.

See the below image to understand the differences between GitHub's web editor and GitHub Codespaces. This image is from the GitHub official documentation. You can read more details here. 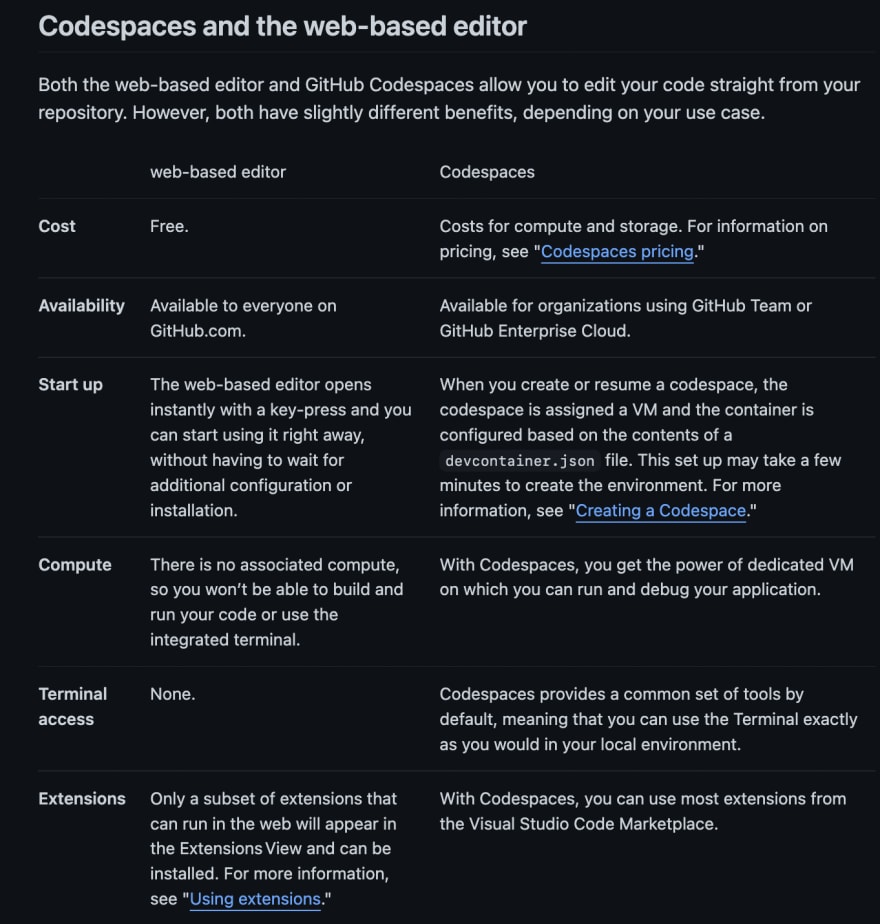 P.S. I wrote this blog post with GitHub Copilot. 😉 (These are all my own words, thoughts, and frustrations, but Copilot helped unblock me when I couldn’t find the right phrases or motivation.)

There's so much to learn about GitHub Codespaces. Comment below if you have any topics regarding GitHub Codespaces you'd like me to cover in future posts. Follow me and GitHub on DEV if you want to see more content like this. Thanks for reading! 🙏🏿

My top 10 re:invent 2022 sessions for Data Scientists and ML Developers