So, in order to make it a less confusing topic, I will be writing a series of articles covering from the very basics of web assembly, to making a simple web assembly application

In this first article I will cover, what is web assembly, why it's faster than regular javascript (in a very superficial way. But I will drop some links for those who want to deeply understand the matter), and finally show some examples of applications running it.

What is Web Assembly

"WebAssembly (abbreviated Wasm) is a binary instruction format for a stack-based virtual machine. Wasm is designed as a portable target for compilation of high-level languages like C/C++/Rust, enabling deployment on the web for client and server applications."

This description is taken directly from the web assembly's website main page (https://webassembly.org/)

web assembly is a compiler target

What is a compiler target ?

In order to understand a compiler target, first we have to understand what exactly is a compiler. Roughly speaking, a compiler is a translator, which (generally) translates the code we give to it, to a lower level code. That is what web assembly is, the result of the compilation from one "high level" (even thought c/c++/Rust aren't as high level as javascript or python, they are still high level languages when compared to machine code).

So, will web assembly kill javascript or not ?

Absolutely not. it's not even its intention. Wasm's main goal is to be an javascript ally, handling heavier and more complex calculations. One of the main proofs that web assembly's goal isn't to replace javascript, is that it doesn't even have access to the DOM API, meaning that it isn't able to change what we see in our html files.

Why it is faster than javascript

The secret of its speed relies on two key factors.

Javascript is a language designed to be easily understood by humans. What is a double edged blade, because while it is indeed easy to read and write code in javascript (or at least easier than in most languages), this ease comes with a price. In order for javascript to be so "hackable" and having multiple ways of doing the same thing, it has to make a bunch of validations even to do the simplest things. For example

What do you think javascript has to do in order to return you the result of the following ?

It should do something pretty simple, right ? Wrong

It has to do a bunch of validations in order to know what it should do with the parameters a and b.

Are a and b strings ? if so, it will concatenate them

is b a number, and a an string ? if so, it will turn the number into a string and then concatenate a and b

or even, are a and b numbers ? in that case the numbers will be added, returning a numeric value

and the validation list looks something like the image bellow, taken from Alex Danilo talk about web assembly in Google I/O 17

Compiling for the Web with WebAssembly (Google I/O '17) 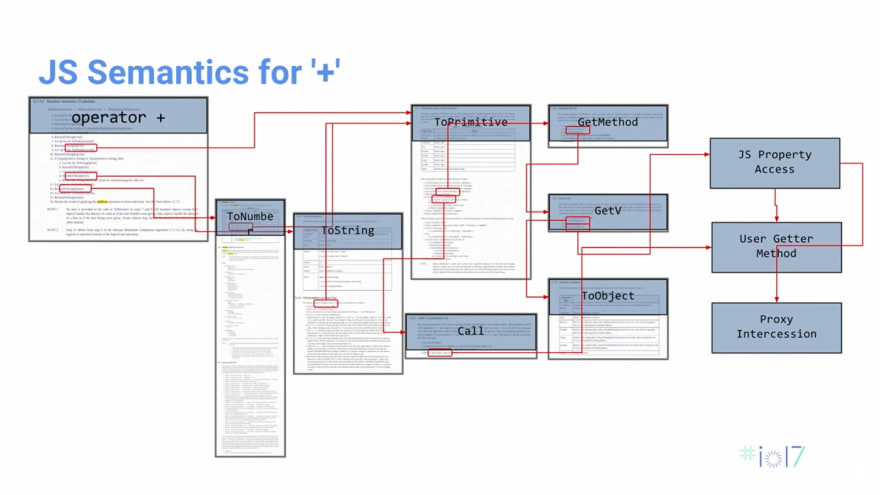 that isn't the case with lower level languages (such as the ones supported by web assembly) since they don't do these verifications and operators tend to have one lexical meaning, instead of many, such as in javascript, where the same operator/instruction oftenly has more than one meaning.

If we went through all this complication just to add two parameters, imagine what kind of validations more complex operations require. Having this whole bunch of code being run makes your application slower

Even thought javascript is a interpreted language and doesn't have to be compiled in order for it to run, modern browsers use JIT's (just in time compilers) to optimize it, making its performance significantly better than it would be otherwise.

if you don't want to dive that deep into the details, just trust me (and the following image) when i tell you that Wasm code goes trough fewer steps separating the download of the file from its execution,hence it's faster. 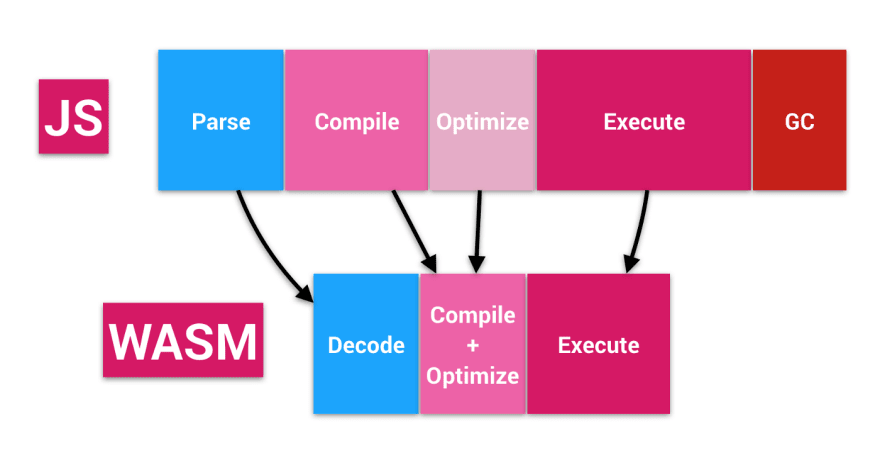 This first example is just a demo, of a simple web editor running in web assembly displayed in the same page of the same editor, but running completely in javascript. The performance of both implementations is shown and compared in the page 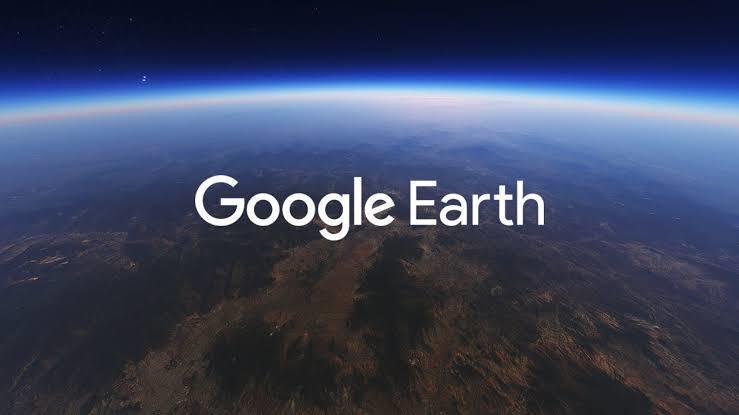 Google earth also uses web assembly in order to make the rendering of its complex 3d shapes possible in the web. Similarly to figma, they also have a post explaining its use of web assembly

Now we finally know what Wasm is, why it is fast and some tools that are already using it 🎉🎉🎉🎉🎉

This was only the first part of a series about web assembly. If you liked it, please:

JSON web tokens are NOT meant for authenticating the same user repeatedly: Use session tokens instead