CI/CD has become an important part of the software development process, both in large and small companies and projects, including open source.

But it often happens, especially on small projects, that the most simple and straightforward solution is needed, rather than functionality. In this case, Ansible Semaphore is a good alternative to GitLab and Jenkins.

Ansible Semaphore is a web interface for running Ansible scripts with rudimentary CI/CD. With it, you can turn your playbook into a simple CI/CD system. This is an open source project that has been in development since 2015 and currently has 5200 stars on GitHub.

The Ansible Semaphore interface resembles that of Jenkins and AWX. The description of the interface can be found in the documentation.

The following assumes that the reader is familiar with Ansible.

For demo purposes will take the Trunk development model. Unlike Git-flow, this model assumes the same branch for development and production. This greatly simplifies CI/CD.

All elements of the scheme are easily implemented on Ansible. And thanks to versioning and scheduling of Ansible Semaphore, all this will work automatically.

Firstly, create a repository on GitHub

We need two playbooks and the corresponding roles for them:

Here is the source code: github.com/fiftin/ansible-semaphore-deploy-test. 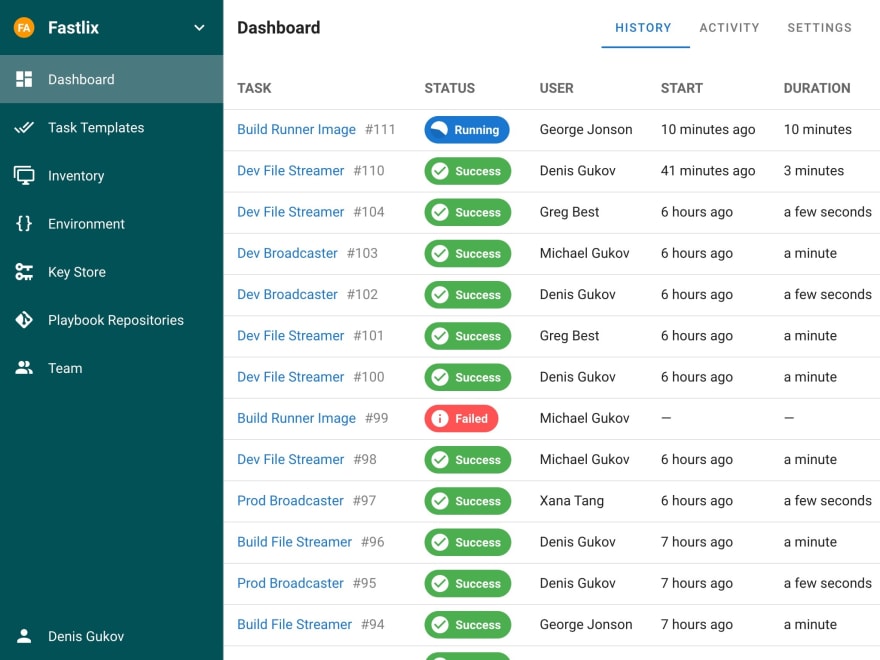 For those who are familiar with AWX, the interface will be clear. For the rest I will briefly tell. The interface has the following key entities:

We will deploy this simple web application: github.com/fiftin/ansible-semaphore-test-app :)

The Build task is executed automatically when a new commit appears in the repository. Successful builds are loaded into S3 storage.

After each successful build, the Deploy to Dev task is automatically launched, which deploys the application to the Dev environment. A demo dev site is available at demo-dev.ansible-semaphore.com.

You can play around with the above example at demo.ansible-semaphore.com.