Why Use Docker for Deploying to AWS?

There are so many good reasons to use Docker, it would be hard to fully sell all of the benefits in a few paragraphs. On the outside, it seems like a lot of abstraction without immediate benefit. However, the ability to codify your infrastructure makes it possible for your web/cloud hosting solution to respond to changes in traffic. Since containers are small enough to be run on a developer's machine, development and production environments are nearly identical, reducing the chances of platform dependent bugs. Their small size also means you can run many containers on one machine.

You can read the following links if you're not familiar with Docker (and containerization in general), and to learn why it could be beneficial for your project's architecture.

Assuming you are already convinced, let's get down to business.

Before beginning this tutorial, this article assumes that:

I know from experience that trying to add a big architectural change to an existing application can be tricky sometimes, causing lots of headaches. To ensure that you do not run across the same trouble I had, we'll create a sample application to go along with this tutorial.

If your configurations stray from this example, and need some guidance, feel free to reach out. If your existing application is drastically different, you should consider a smaller, more incremental change, which might be outside the scope of this article. Hence, for this tutorial, I created a sample Rails application, which uses MySQL by default.

First verify you have MySQL running:

Make sure you see mysql here, otherwise you'll have trouble connecting to the database. Next we will create the Rails app.

To ensure that our Rails application can talk to the database, we will create a simple UI to store blog posts. Rails gives us the ability to generate very simple UIs automatically, using scaffolds. We will generate a UI scaffold for blog posts using the rails generate scaffold command. This command creates a database table and a set of web pages to create new blog posts, edit existing blog posts, etc.

Now go to your browser with this URL: http://localhost:3000. If everything worked as expected, you should see this image: 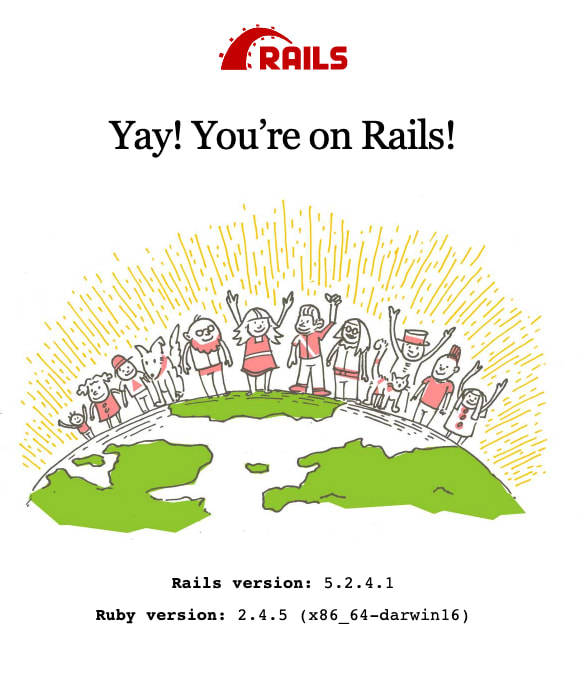 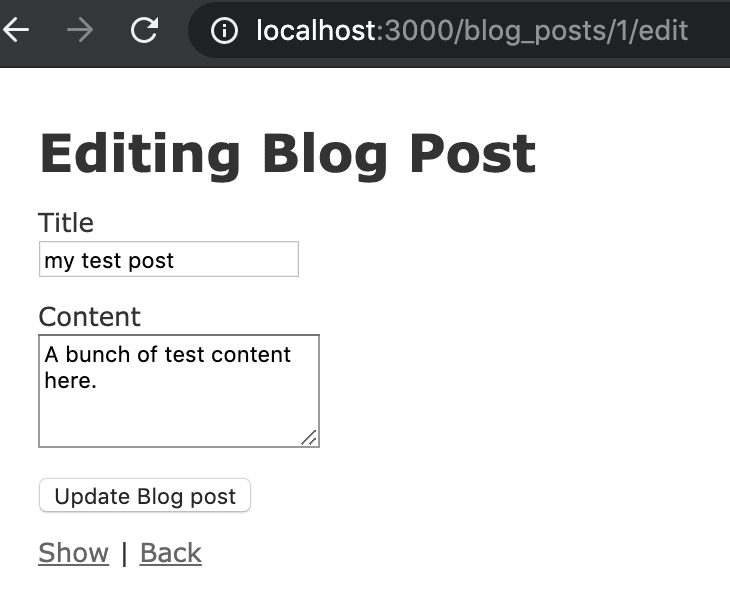 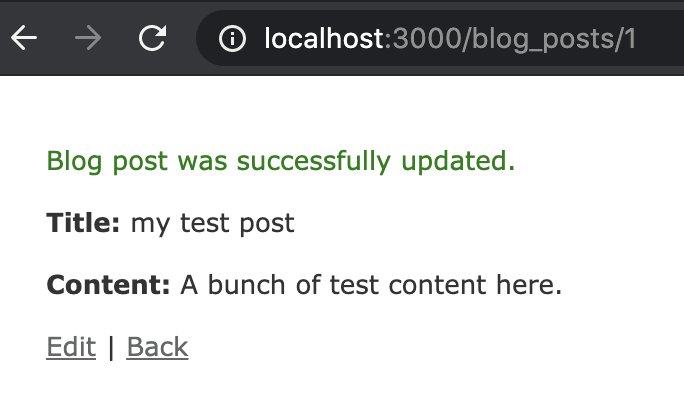 If you see this screen, your app is connected to your database. We're on our way to a dockerized app!

A Dockerfile is a way to describe a docker image. It starts with a basic image, in this case we're using ruby:2.4.5-stretch which is based on Debian's Stretch distribution. There are lots more to talk about how Dockerfiles work. But that is the subject for a future blog post. Here is one that I propose we use for this series of posts.

The ENTRYPOINT directive is the final line as that will be the script we use to start the application. The contents of the file entrypoint.sh are below.

In our Dockerfile, we used the COPY command to copy all of the files into our container. We would like to ignore some of those files. In that case, we include a .dockerignore file in our project:

Docker Compose is a tool for running multiple containers that must maintain network support between them. For example, a database and a web application must be in constant communication in order to persist, query, and then dynamically display information.

The contents of your config/database.yml file should look something like this:

After adding the Dockerfile and updating the config/database.yml, we can build and run our container to verify it works properly.

Look for environment variables, $MYSQL_USER, $MYSQL_PASSWORD, making sure they are being set properly.

Try connecting via mysql. If those seem okay, you can attempt to log into the database by running.

Building and running from docker-compose

Once you've set everything up, you can build it using docker-compose build.

Once it has finished building, you can run them with docker-compose up.

Your Rails App has Been Dockerized! 🎉

You now have a version of your Rails application running on a local Docker container. We did this to make sure it is working locally before deploying it to the rest of the world. In the next part of this series, we'll talk about getting your container running on AWS.

How we migrated an entire AWS Organization to a new one, without anyone noticing.