I began looking into WebAssembly as a means to process pixels from a video feed. That experience was very fun and rewarding. I wanted another Rust and WebAssembly challenge, so I built Gobblet, a two player game played on a 4x4 board with 12 pieces of different sizes.

Gobblet is a game where players take turns to place a piece on the board or move their piece that already is on the board. Bigger pieces can be placed so that they cover smaller ones. A player wins by placing four pieces of the same color in a horizontal, vertical, or diagonal row. Basically Gobblet is advanced tic tac toe. 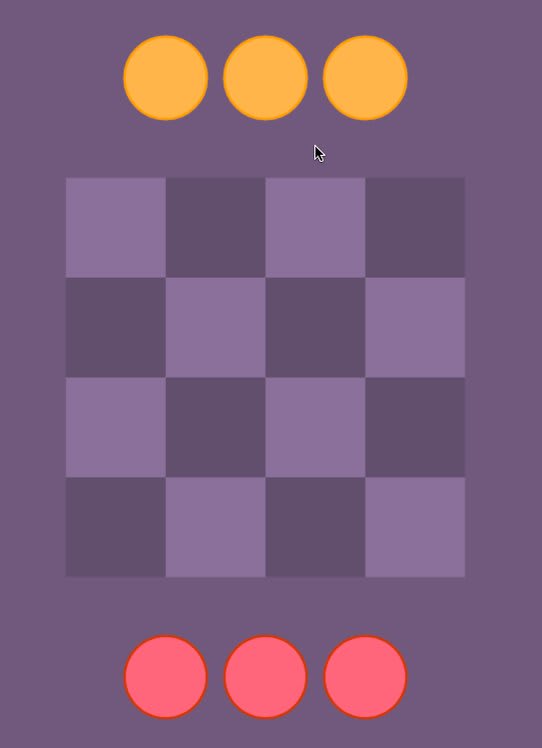 🎊 I finished making Gobblet with Rust and WebAssembly! This is the final project for an Intro to Rust course I am making. Now to create the instructional videos. 🥳

Below is a summary of what I learned, and what I will avoid the next time I use Rust and WebAssembly.

I usually reach for RxJS when building complex user interaction, but not today. I was building Gobblet with Rust because I was curious to know where the pain points can exist.

I began by creating event listeners to process three mouse events: mouse down, mouse move, and mouse up. These three events combined represent a drag event, and can be used to influence the state of the game. After each mouse up event, I used Rust to see if either player had 4 pieces in a row.

I'll be honest, adding an event listener is a bit over the top in Rust. If I would do this over again, I would not use Rust to add or remove event listeners. What's happening here is we are creating a closure defined in Rust and passing it to JavaScript. We pass this to JS because the closure must persist beyond the call to this one function start_game.

Also of note here is the .as_ref().unchecked_ref() chain, which is how you can extract &Function, what web-sys expects, from a Closure which only hands you &JsValue via AsRef.

👍 This is when I started to regret adding event listeners with Rust.

It's a lot. I don't enjoy it. Just creating these closures was the tip of the iceberg. I then had to create Reference Counters for my game logic and game graphics, and pass clones of these to each closure. In the majority of cases, ownership is clear: you know exactly which variable owns a given value. However, there are cases when a single value might have multiple owners. For example, in graph data structures, multiple edges might point to the same node, and that node is conceptually owned by all of the edges that point to it. A node shouldn’t be cleaned up unless it doesn’t have any edges pointing to it.

To enable multiple ownership, Rust has a type called Rc<T>, which is an abbreviation for reference counting. The Rc<T> type keeps track of the number of references to a value which determines whether or not a value is still in use. If there are zero references to a value, the value can be cleaned up without any references becoming invalid.

To complicate things further, these mouse events will mutate the state of the game logic and the game graphics. So I opted for RefCell<T> to handle the mutation of data in a single area of memory.

Then, when we use Rc<RefCell<T>>, we are saying we have shared, mutable ownership of data in our application. You can check out this pattern here in the Rust Book

This was the probably the most fun I had when building this game. I created a simple game manager to coordinate the game state as the user interacts with the board. It consists of two players, a board, and the current turn.

The Board is a struct used to manage pieces on the board. It is a two dimensional vector of Cells. Pieces can be added or removed from a cell. 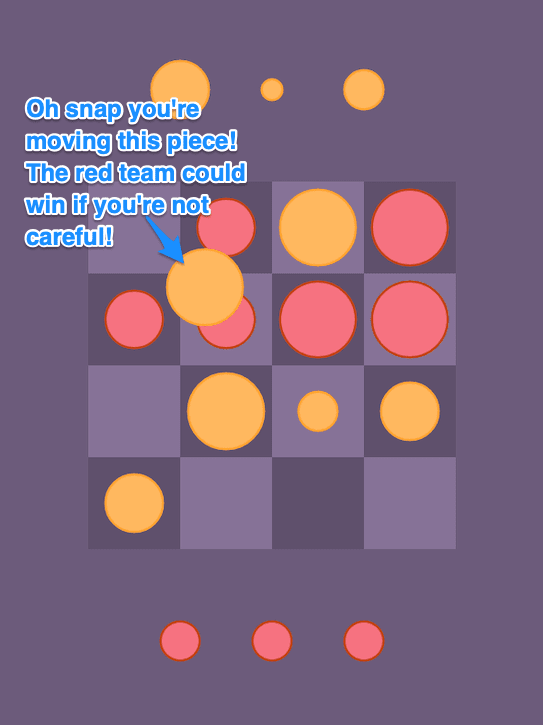 I opted for a function which accepts a PlayerNumber enum as a parameter. I then counted the pieces on the board using gasp a double for-loop. This isn't ideal, I should have kept track of the player's positions per move but this was the quickest solution.

If the player has 4 pieces in any given row, column, diagonal or anti-diagonal, then they won:

At this point, I started to question everything I was doing. I had to repaint the frame for every mouse move when the player was dragging a piece. I had to check if the player dropped the piece on a valid spot. I had to grab the "top" piece from the gobblet stack. The list of requirements for the UI seemed never ending and it was clear I spent little to no time on planning the architecture for this game.

So I kept programming

The Graphics struct kept track of what piece was clicked, and rendering all the rectangles and circles on the canvas.

The first challenge I had was creating the a checkerboard with Rust. I wanted it to be flexible in case I wanted to make an n * n checkerboard one day.

This took a good minute to figure out, but once I did I was so excited. If you're curious, this is what happens when n_row and n_col are set to 40.0 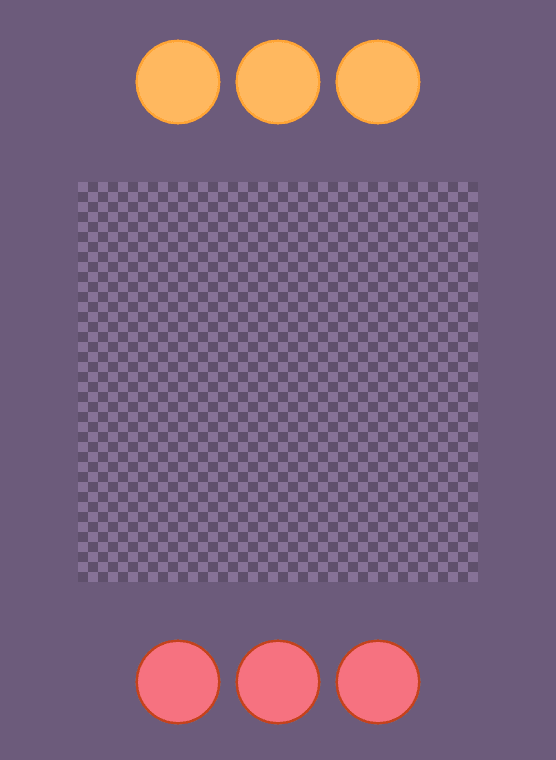 Things began to take a turn for the worse when I attempted to figure out which circle was clicked. Using the coordinates of the click event, I could determine which Path2D was chosen.

It was here when realized I was using functional decomposition to address complexity, and as a result, I was adding more complexity to my program. But that's ok, because I know that I will never build something like this in Rust ever again.

What did I learn?

That being said, using Rust and WebAssembly to build this canvas based game was equivalent to using a bulldozer to hammer in a nail.

Confusion is a feeling that precedes learning something. It means you should pay closer attention, not disengage. I learned so much about Rust then I ever did reading books and articles about it. When I built this game, there were days I considered giving up because I was stuck on a Rust problem. But I kept researching and experimenting. I am proud of what I built, even though it's not flexible and it's overly complex. This experience will help inform my decisions the next time I need to use Rust and WebAssembly.

Making Games in Rust - Deploying a Bevy App to the Web

Once suspended, fallenstedt will not be able to comment or publish posts until their suspension is removed.

Once unsuspended, fallenstedt will be able to comment and publish posts again.

Once unpublished, all posts by fallenstedt will become hidden and only accessible to themselves.

If fallenstedt is not suspended, they can still re-publish their posts from their dashboard.