There are many specific tasks that could significantly improve and automate your ongoing maintenance of big-project. Some of them require building tools that can analyze or change source code created by developers.

For example, such tools could be:

Solving such tasks seems to lead us to complicated topics of compilers and parsers. But in 2022 every modern programming language comes with batteries included. The structure of code in form of AST that is ready to be searched and manipulated is presented as a built-in library. Basically, parsing files with code and searching for specific things is not much harder as do the same for JSON or XML.

In this article, we will cover AST analysis in Go.

In golang there is a standard package ast that provides structs of AST nodes and functions for parsing source files. It is quite easy and straightforward for experienced go developers to write code for the tool. Also, there is printer package that can convert AST back into source code.

Here is a list of articles describing how to manipulate AST in golang:

One small aspect, you need to know the structure of golang AST. For me, when I first dive into the topic, the problem was to understand how nodes are combined together and figure out what exactly I need to search in terms of node structure. Of course, you can print AST using built-in capabilities. You will get output in some strange format:

Also, since the format is very specific, you can’t use any tools to navigate it, except text search. Tools like goast-viewer can help with this, but capabilities are limited. 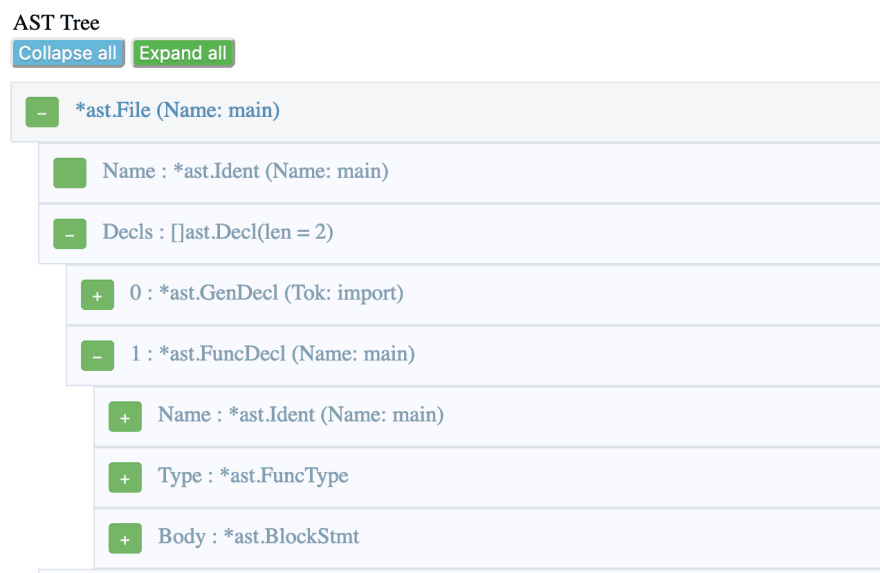 I started thinking of the library that would allow us to convert AST into some very conventional format like JSON. JSON is easy to manipulate, and many tools (like jq) and approaches exist to search and modify JSON.

So, what I end up with is asty

Asty is a small library written in go that allows parsing source code and presenting it in JSON structure. But, moreover, it allows also to do the reverse conversion. It means that now you can manipulate go code with a tool or algorithm developed with any programming language.

You can use it as go package, as a standalone executable, or even as a docker container. Try this page to experiment with asty in web assembly.

asty is also capable to output comments, positions of tokens in original source, and reference ids. In some places, AST of go is not actually a tree but rather a DAG. So nodes may have the same ids specified in JSON.

In the development of asty I tried to follow some rules:

I looked hard for existing implementations of this approach. Unfortunately, not much to be found.

One project goblin, which I tried to use for a while, is quite good and mature, but it misses support of backward conversion from JSON to AST. It tries to reinterpret some structures in AST to (I guess) simplify and make them more human-readable. My personal opinion - it is not good. But the main issue with it is lack of maintenance. It was developed a long time ago for version 1.16 and was not updated since then. However, you can find a fork of it relatively up to date.

Another project go2json, generates JSON from go code. Also missing the backward conversion and poorly maintained. And it is implemented as a standalone parser with javascript. I think in this way it is very hard to maintain and keep it up with new features in golang.

I am looking for cooperation with other developers interested in language tools development. Meanwhile, you can check another repository with examples where I experiment with AST JSON in python.

Using Discord as your CDN.

Once suspended, evgenus will not be able to comment or publish posts until their suspension is removed.

Once unsuspended, evgenus will be able to comment and publish posts again.

Once unpublished, all posts by evgenus will become hidden and only accessible to themselves.

If evgenus is not suspended, they can still re-publish their posts from their dashboard.

Once unpublished, this post will become invisible to the public and only accessible to Eugene Chernyshov.

Thanks for keeping DEV Community 👩‍💻👨‍💻 safe. Here is what you can do to flag evgenus:

Unflagging evgenus will restore default visibility to their posts.