Welcome to the third installment of The Illustrated Actionhero Community Q&A!

Every week in October I’ll be publishing a conversation from the Actionhero Slack community that highlights both a feature of the Actionhero Node.JS framework and the robustness of the community’s responses… and adding some diagrams to help explain the concept.

Hey everyone, I could use some high-level pointers. I've been looking at AH for a game where I need to keep track of user's amount of money, which changes based on different stuff even when they're offline. I've been looking at AH tasks for this and then just pushing the new state to connected users periodically. I'd like to do these cycles (both updating and pushing) as often as possible, ideally less than a second apart. Am I on the right track?

@nrk It's a little hard to say for sure with only this 100,000' view but many of us here in this channel have dealt with online/offline sync use cases and can help out if you run into trouble. ActionHero is already sounding like a good base for you because with it youll get two things most other platforms don't provide:

So just napkin-drawing here, you might envision an architecture where your clients connect via raw TCP or WebSocket to a node in your cluster, and execute actions there. As their actions generate consequences, you can broadcast messages to the cluster to "find" those users and update them live if they're connected. You can also use the tasks layer to do background/async work whether users are online or offline (batch, scheduled, triggered by other users, etc.) and not have to know if the users is there. If they are, they get a live update. If they aren't, you arrange for them to start with an initial status message when they next connect.

AH includes some other meta concepts that make certain features easy to add, such as chat room mechanics. That can be used for what it's named for (making chat rooms) but also for other things that work the same way even if they're named differently (like monitoring a currency or stock symbol - each stock could be a "room" and the system could broadcast price updates to that "room"to any users monitoring it).

Thanks for taking the time to type this up and help out. Sounds perfect! I'll definitely give it a go then. Love the docs and tutorial with examples so far!

The architecture described by Chad could be drawn like this: 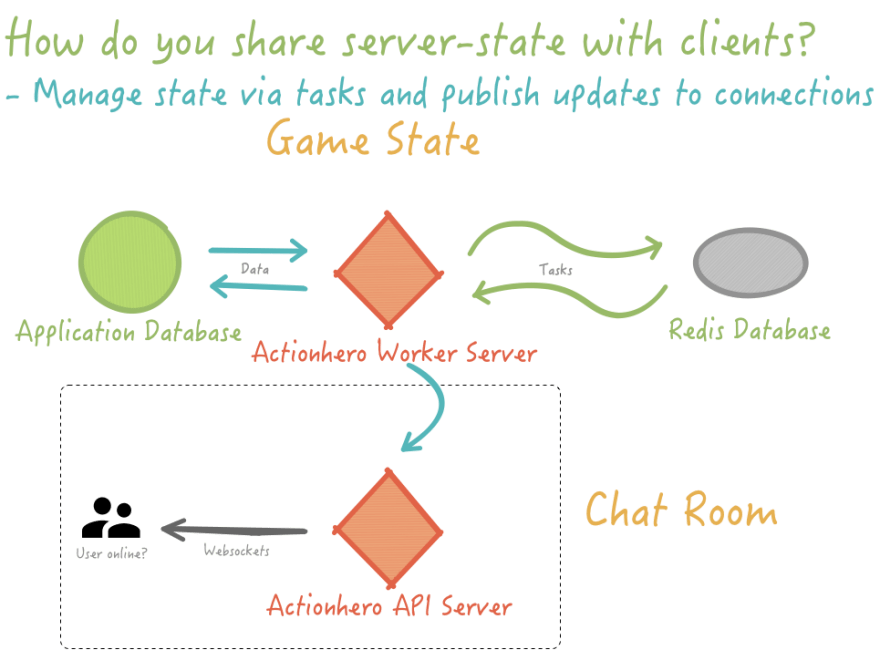 And, as a reminder, "Chat Rooms" can do far more than just send text messages back-and-forth! 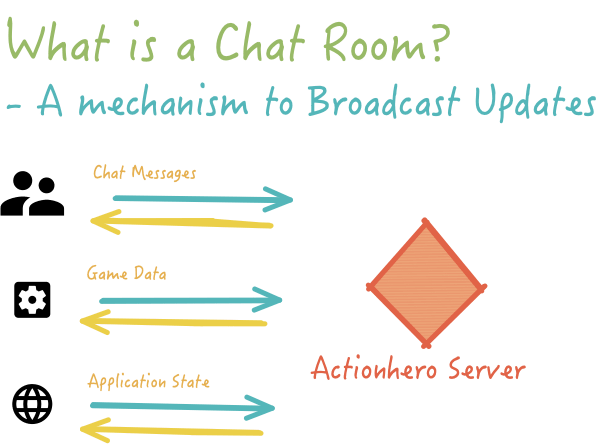 The diagram in Production Notes is under-appreciated, in my opinion. It's really what separates ActionHero as a framework from other more simpler ones like Express/Sails/etc. Express is just a framework. It does what it does and you can write software it it. The smarts are good, but they only do what they do at face value. 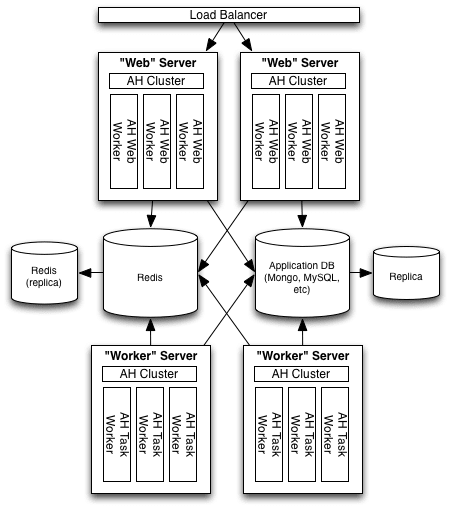 ActionHero is a framework that enables an architecture (shown above).
Any but the simplest apps eventually need to scale, and when they do you have to figure out how multi-server work is going to happen. The moment you do you see how weak things like Express are because you have to write so much code yourself just to get a message from user A on node A over to node B where their recipient is. When you go read "tutorials" like https://www.manifold.co/blog/building-a-chat-room-in-30-minutes-using-redis-socket-io-and-express-9e8e5a578675 and realize how much code they just wrote to do what AH did out of the box.

It's common in many AH setups for admins to want to separate "front-end" from "batch" services. For instance you might have an action createAccount that sends an email to the user. Sending the email might take a bit of time and involve some retrying with your mailgun / sparkpost setup. So createAccount() can make the user in teh DB and return the session, then call enqueueTask('welcomeEmail', { params }) to send the welcome email. And you could configure a "worker" server to do that.
This is all optional. You could just run everything on a single box, or maybe just two main nodes for DR
Actions, Tasks, the whole shebang
The point is if you WANT to have "front-end nodes vs. batch processing nodes" you can.
Some orgs really want this, because their front-end nodes get DDoS'd a lot. Back-end (worker) nodes aren't typically visible to the Internet so they aren't affected by attacks)
Workload requirements may also vary. For instance, batch processing might need a ton of memory and disk (uploading videos from a video chat site to Youtube for archival) while front-end nodes may be more CPU intensive handling tons of user calls in parallel. So maybe you want your task workers to be beefy memory-heavy systems with big disks, and your front-end nodes to have tiny disks and lots more CPU.
This is what I alluded to above: Actionhero is a framework that enables an architecture.
You get the code, but you also get the ability to operationalize your app and scale it as you grow.

Chad has build a number of high-throughput applications with Actionhero. He’s done a great job of explaining the high-level architecture of how you might use Actionhero to create a real-time game, and also explained some of the limitations of the framework — a balanced response.

How To Set Up Continuous Integration And Deployment With CircleCI