Let’s go further in the bundle series today with this introduction to the Entando Component Generator (ECG). Based on JHipster, through a blueprint, the ECG makes your life easier when it comes to developing a backend and micro frontend application. It allows you to generate your components and start the development of your business features, and package them into an Entando bundle to deploy them in a few steps.

In this blog post we will introduce the concept of application generation, entity definition and their deployment into an Entando application.

In order to run the commands present in this article, you need to have the ENT CLI and a running Entando instance installed. I suggest following the automatic installation process.

You also need a GitHub account and two repositories. By convention we add the “-bundle” to the bundle repository. e.g “testProject” and “testProject-bundle”.

Generate your Backend and Frontend Components

JHipster is an open-source generator to create cloud and prod ready Java Spring boot applications. The blueprint technology allows third-party developers to customize the JHipster behavior and the outcomes.

The ECG is a blueprint that generates fully Entando compatible Java applications and micro frontends.

The ECG comes with the ENT CLI, or you can install it by running the check-env command.

The correct JHipster and blueprint versions are automatically installed and are isolated from any existing JHipster versions if you have other instances installed.

The first step will be to generate the code source by using the JHipster blueprint in order to initiate the backend.

First create a folder to generate your project:

From this folder, generate an application using the following command:

Please note you will probably need to give some informations before JHipster will be launch if you don’t init the project before:

When answering these questions. You can select default values by just clicking on enter or select specific values. For this blog post I only select the default ones.

Note that you can elect to enable or disable micro frontend generation by answering the question:

After this step, your application is generated and contains the backend code in Java based on the SpringBoot and the configuration needed to run it in both dev and production environments. 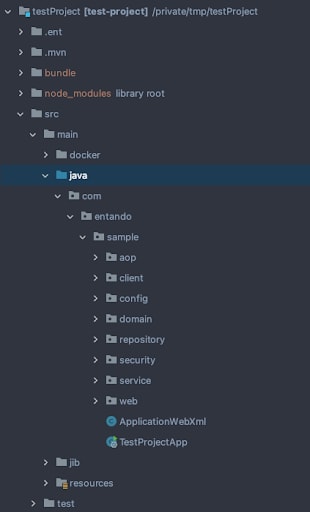 The entity term comes from the Java Persistence API and defines the object used to wrap the data stored in the database in a Plain Old Java Object (POJO).

With JHipster, the entity generator generates this POJO and all the code and configuration with from a definition file.

The Entando Component Generator adds the capability to generate React micro frontends linked to the entity alongside the Java backend code.

In the HTML page the MFE is included by using a custom element, the MFE DOM is placed in a “shadow DOM”.

Each MFE is known as a Widget in the application bundle.

Why are we talking about MFEs as "widgets" at Entando?
The widget is the Entando component that allows self-contained pieces of frontend logic to be deployed and installed into your Entando application.

From your project location, run:

The first step is to define the entity fields by giving a name, select the type and validation rules. You can create any number of fields you want. 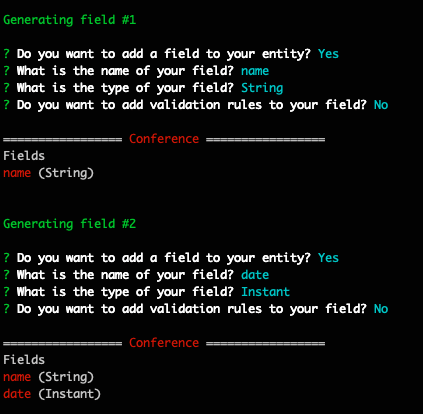 Then you can choose to create relationships with other entities, but for this example we’ll generate only one entity.

The next question allows you to define the architecture you want to use in your application for controllers and business logic.

The entity generator lets you choose between different implementations according to whether you want to expose the entities directly or use a business service layer between, with interfaces or not.

The last step provides a few advanced options. Just answer “no” to both.

Following these questions, the entity is created and the code is updated.

A message about conflicts with Liquibase files will be displayed. The entity generator replaces the previous master.xml file. Here, just override it. A blog post about Liquibase file management is coming soon. 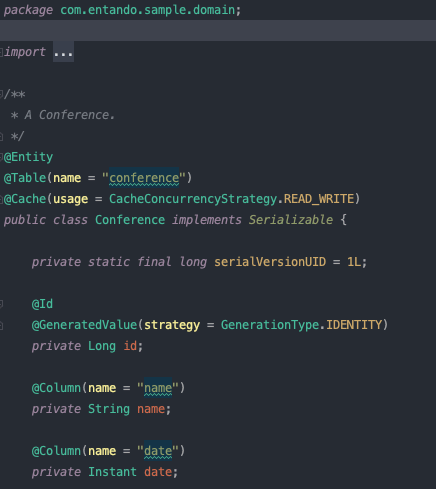 The JPA entity is available in the domain folder. The MFEs can be found in the ui/widgets folder.

The bundle is available in the “bundle” folder at the project root level and references both the microservice as a plugin and the MFEs as widgets.

But it’s not enough and in the next chapter we will improve it.

Push the Code into a GitHub Repository

Even if it’s not mandatory to finish this tutorial, I suggest you push the code into a GitHub repository.

Build the Microservice and MFEs

To achieving this step the ENT CLI will help us by providing an unique command to build them all, run this command from your project location: 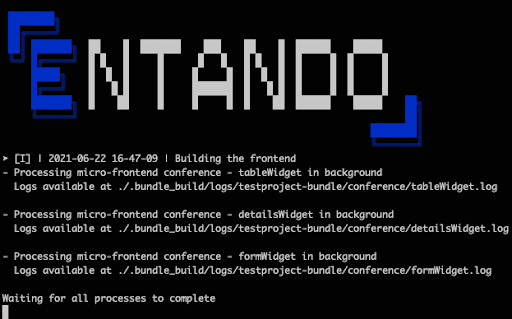 This command builds all the MFEs and the backend application (including the docker image), this process can take some time to complete.

When the build process is fully completed, you should have 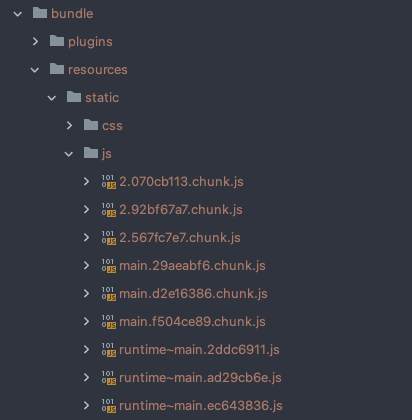 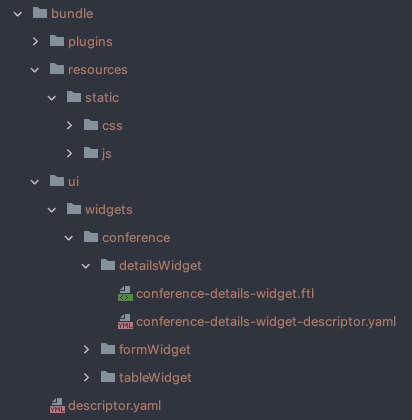 The publishing step will push the artifacts into repositories so that they can be downloaded by the Entando application during the installation phase.

Run the following command from your project location

You need to answer the questions. Please note you have to use the HTTPS url for the GitHub repository. 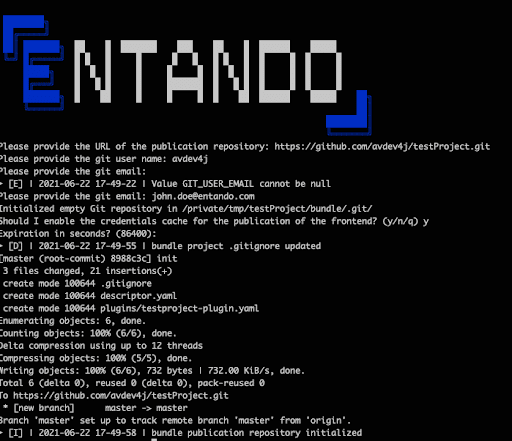 At the conclusion of this command the plugin and the main bundle descriptor have been pushed to GitHub.

Run the following command from your project location:

You will need to provide a version for your bundle. Note this version will be used to tag your bundle on Git. We usually use the semantic versioning, note that if you want to follow the Git tagging convention, you need to explicitly use the prefix “v”, e.g “v0.0.1”.

Your GitHub repository contains now all the bundle descriptors and the JS and CSS resource files.

The Docker image is available on DockerHub.

Deploy and Install the Bundle

Now that the bundle and the artifacts have been pushed into the different repositories, we can install them on the Entando application.

We define two different steps between making the bundle available in the Entando Component repository and install it or a given version.

To deploying your bundle you need to run this command from your project location:

The ECR is empty by default.

After the deployment, the ECR contains your bundle.

However the deployment is not enough to use our micro frontends into our application. We also need to explicitly install it. You can do it through the app-builder UI by clicking on the “install” button or by using the ENT CLI again and run the following command:

Note adding the --conflict-strategy parameter allows you to define the strategy to adopt if the components already exist: override, create or skip them.

The bundle is installed and the components are available in your Entando application.

Congratulations, your micro frontends are now available and you can add into pages and display them.

To check the plugin running you can run the following command:

You should be able to see two pods with the name starting by “<organisation>-test-project”. One for the database and one is for the backend Java application.

Launch the backend and frontend locally

In order to run the components locally you firstly need to start the keycloak image by running the following command into your folder:

The Keycloak is started when the following message is displayed:

Starting the backend will launch the .jar artifact as you can do with any vanilla SpringBoot executable jar.

Still in you project location, run the command:

When the application is ready you can access it to: http://localhost:8081/services/testProject

To start a micro frontend you need to run the following command in your project location:

If you want to run more than one at the same time, the port is incremented by one.

Deploy the Frontend or the Backend only

For some reasons you may want to handle only either the frontend or the backend. For example, for a modification in a MFE you should only re-build and push the frontend not the backend and the Docker image.

For achieving this, it’s possible to use the dedicated commands:

If you want to learn about the ENT CLI commands, feel free to read this series on our blog.

This article is probably the one that goes further in the Entando workflow with bundles. From the generation to the installation, we saw a few tools we provide to make the developer's life easier.

Now you know how to leverage these tools to improve your productivity, the next blog post will deal with bundle extractions from an existing environment.

I’m looking forward to seeing you again and sharing my bundle knowledge with you.

Proposed Infrastructure Setup on AWS for a Microservices Architecture (1)

Why GraphQL Is Perfect as Data Layer for Microservices

Get started on the platform today!