We’ve wrapped the second edition of the Gamedev.js Jam last week, so it’s time to do a little summary of how it went, especially given it ended up being way bigger than initially planned.

After the positive response from the first edition in 2020 I was sure there will be more in the future. I did, however, plan to keep it simple - maybe adding Web Monetization as an optional category like we did in js13kGames, and only reaching out to 2-3 well-known partners from that competition. First year was more or less an experiment, and the second was suppose to be a steady evolution rather than a rocky revolution. It ended up to be the latter though.

The number of prizes increased from 6 different types to 17! It went fast from a bunch of licenses in 2020 to licenses, plans, subscriptions, ebooks, cash, crypto, physical devices and swag. Two new categories were introduced: Web Monetization and Decentralized, with dedicated experts judging the entries. The crypto prize pool alone for the Decentralized category was worth about $10k, and included three different types of challenges.

As you can see, Gamedev.js Jam grew a lot - it’s way closer to js13kGames in complexity now, even though the older competition runs since 2012. That’s why the preparations, which started earlier than last year (2020: a week before, 2021: a month before), felt rushed afterwards - there was so much more to handle!

Looking at the numbers

I wanted to beat last year’s stats, and it went even better than expected - the metrics more than doubled: 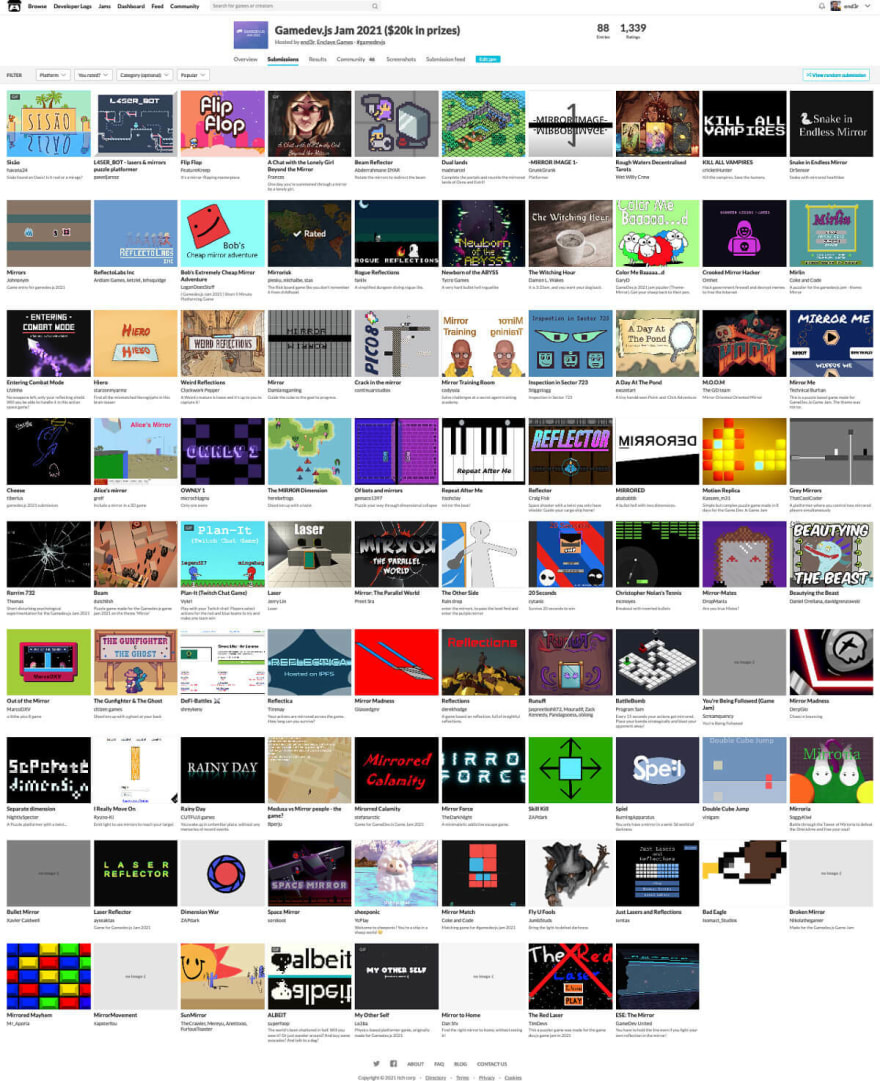 Comparing that to the numbers from first years of js13kGames (61 entries in 2012, and 70 in 2013) it looks quite good, and given Gamedev.js Jam is more broad, it has even bigger potential to grow.

Itch featuring and total prize worth in title

Itch.io featured our competition on their Jams main page a few days before it started. Funny story was that it wasn’t promoted in their email newsletter, but after asking about it, they were totally cool to do the feature.

I decided to edit our Jam’s title on Itch.io to explicitly add the total value of prizes ( $20k ) - we had a few types of licenses in the first one and people were generally surprised there were any, since most of the jams on Itch.io don’t have prizes at all, and told us they noticed this late or only after the Jam ended.

This was something I wanted to do in 2020 already, but Itch.io didn’t have Web Monetization API support back then yet (it was introduced at the end of last year thanks to the efforts around The Web Monetization Challenge), and we didn’t manage to get the Grant for the Web grant on time anyway. 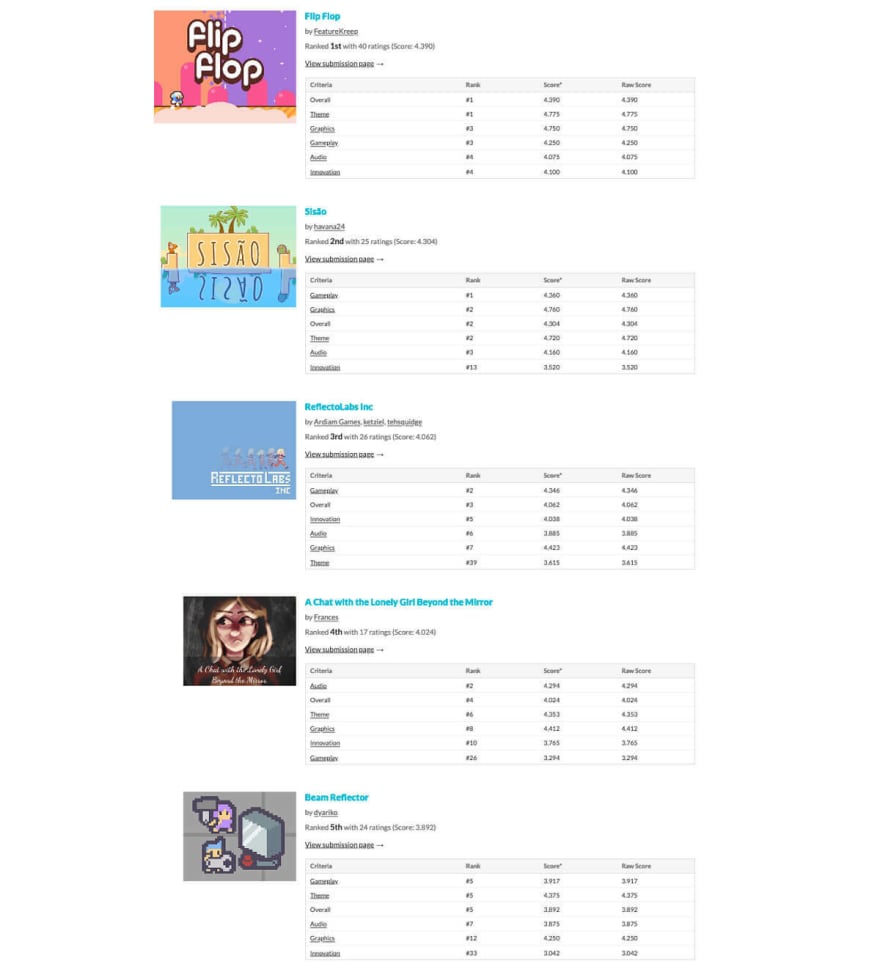 Since our Grant originally was going to run in the second half of 2020, it didn’t include Gamedev.js Jam , but we got delayed, extended the deadline up until the middle of May this year, and decided to replace the Web Monetization and games eBook from our list of accepted Grant projects with the Web Monetization category in Gamedev.js Jam 2021, and that replacement got accepted.

There are many cool and creative ways developers implemented Web Monetization API, so make sure to check those entries!

Something entirely new was the introduction of the Decentralized category. I’m a fan of crypto and blockchain for a couple of years now, but never had the chance to actually try those technologies as a programmer myself. Thanks to the Kernel Gaming Guild where I was assisting the sessions which were led by Paul Gadi and providing my knowledge and experience from the “traditional” HTML5 game development point of view, I got hooked into Web 3. 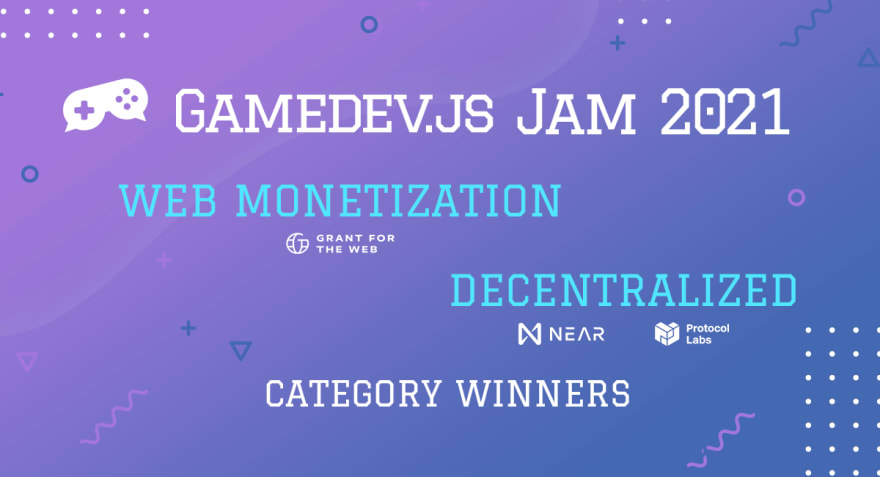 After some initial discussions with a few other folks we thought it would be cool to do a dedicated game jam around the topic, but since the Gamedev.js Jam’s start was approaching fast, we decided to take the advantage of that and add a category to it.

I was lucky enough to get support from both Protocol Labs and NEAR Protocol, which ended up to be main partners of the whole event. We organized challenges around the Decentralized category: using IPFS or NEAR could get you their coins respectively, and there was also a Paras challenge to build a cards game that could be converted to NFTs for their marketplace.

This category ended up with 9 entries - I was hoping to get at least a couple more, this was the only aspect of the Jam I wasn’t fully happy with, but after some discussions we concluded that this is the first small step in the journey.

The teams behind those technologies are wonderful, it was such a pleasure to cooperate with them, and I’m excited to make the next steps as soon as possible - I will most probably be introducing the Decentralized category to the upcoming js13kGames 2021.

Overall I’m happy with how it went, even though there was more work to be done than originally expected. People enjoyed participating, and it feels the community is growing - I can’t wait for the Jam next year already!