React Native Full App Template is loaded with a large number of options, layouts, and functionalities. This is a complete starter app to get started with React Native.

The app template contains a variety of basic layouts and a number of advanced layouts such as Instagram, Tinder, Netflix, Grocery, Chat list, etc. All pages and components are made in a way so you can readily pick up the component and use it in your app. This makes app development a breeze. This Full App Template is guaranteed to cut down hundreds of your development hours.

At Enappd, we make use of best coding practices. Code of Full App Template is well structured, so it can be scaled up to larger applications. To make your development experience more pleasant we have integrated necessary components and screens in the starter.

Following are the packages that we have used:

It’s based on React, Facebook’s JavaScript library for building user interfaces, but instead of targeting the browser, it targets mobile platforms.

With React Native you build a real mobile app that’s indistinguishable from an app built using Objective-C or Java. React Native apps are faster than other hybrid apps and cost half as much as native since React Native uses a common source code for iOS and Android.

The great thing about React Native is, unlike Ionic/Cordova, it does not create webview based apps. Instead, it creates native components for the apps, so the performance of React Native apps is much greater than Ionic apps.

By definition, Redux is a predictable state container for JavaScript apps. Redux makes it easy to manage the state of your React Native app. Another way of looking at this — it helps you manage the data you display and how you respond to user actions.
Simply put, Redux is a state management tool. While it’s mostly used with React, it can be used with any other JavaScript framework or library. It is lightweight, so you don’t have to worry about it making your application’s asset size bigger. It comes along with React Native apps mostly, because React Native does not have a data/state management resource built-in, unlike Angular.

As mentioned above, Redux is a library for application state management. It’s generally used with React, Angular, etc. It helps you write applications that behave consistently, run in different environments (client, server, and native), and are easy to test. In redux, we have a store, actions, and reducers. Here,

Firebase is a mobile and web application development platform developed by Firebase Inc. in 2011, then was acquired by Google in 2014. Firebase is a toolset to “build, improve, and grow your app”. It gives you functionality like analytics, databases, messaging and crash reporting so you can move quickly and focus on your users.

Firebase is a Backend-as-a-Service (BaaS) platform. It started as a YC11 startup and grew up into a next-generation app-development platform on Google Cloud Platform. It is getting popular by the day because of the ease of integration and variety of functionalities available on it.

Some of the quick integrations available with Firebase are

and much more. Firebase is quickly growing to become the most popular mobile app back-end platform. 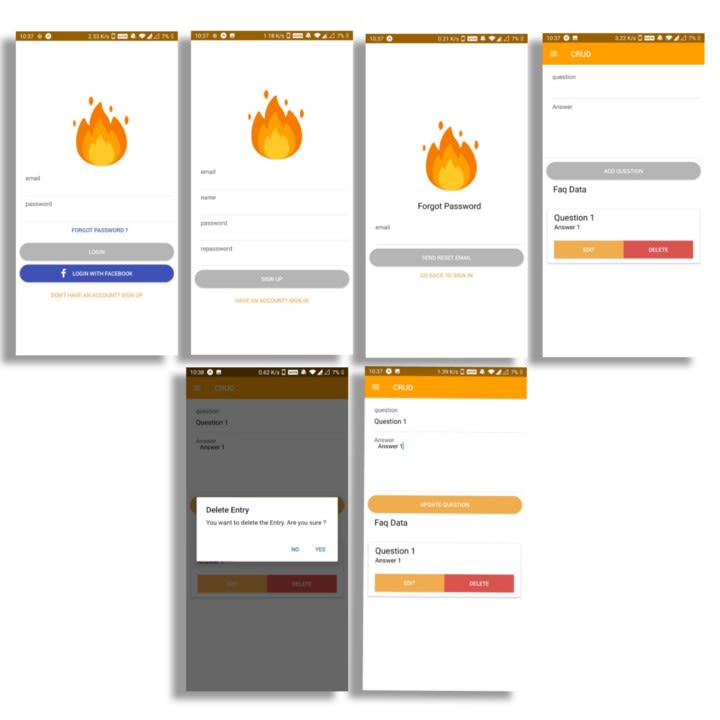 Expo is a toolchain built around React Native to help you quickly start an app. It provides a set of tools that simplify the development and testing of React Native app and arms you with the components of users interface and services that are usually available in third-party native React Native components. With Expo, you can find all of them in Expo SDK. 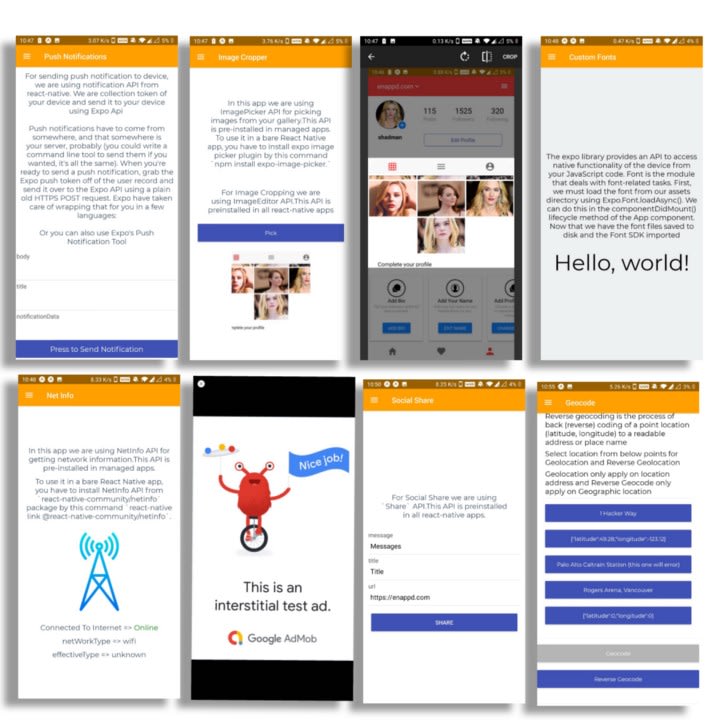 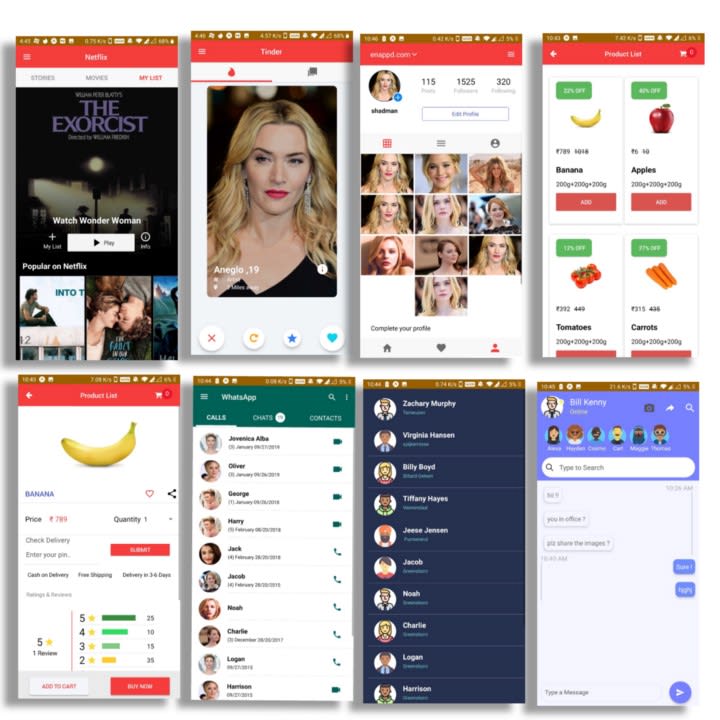 A complete feature comparison table has been formulated for your reference. Take a look below: 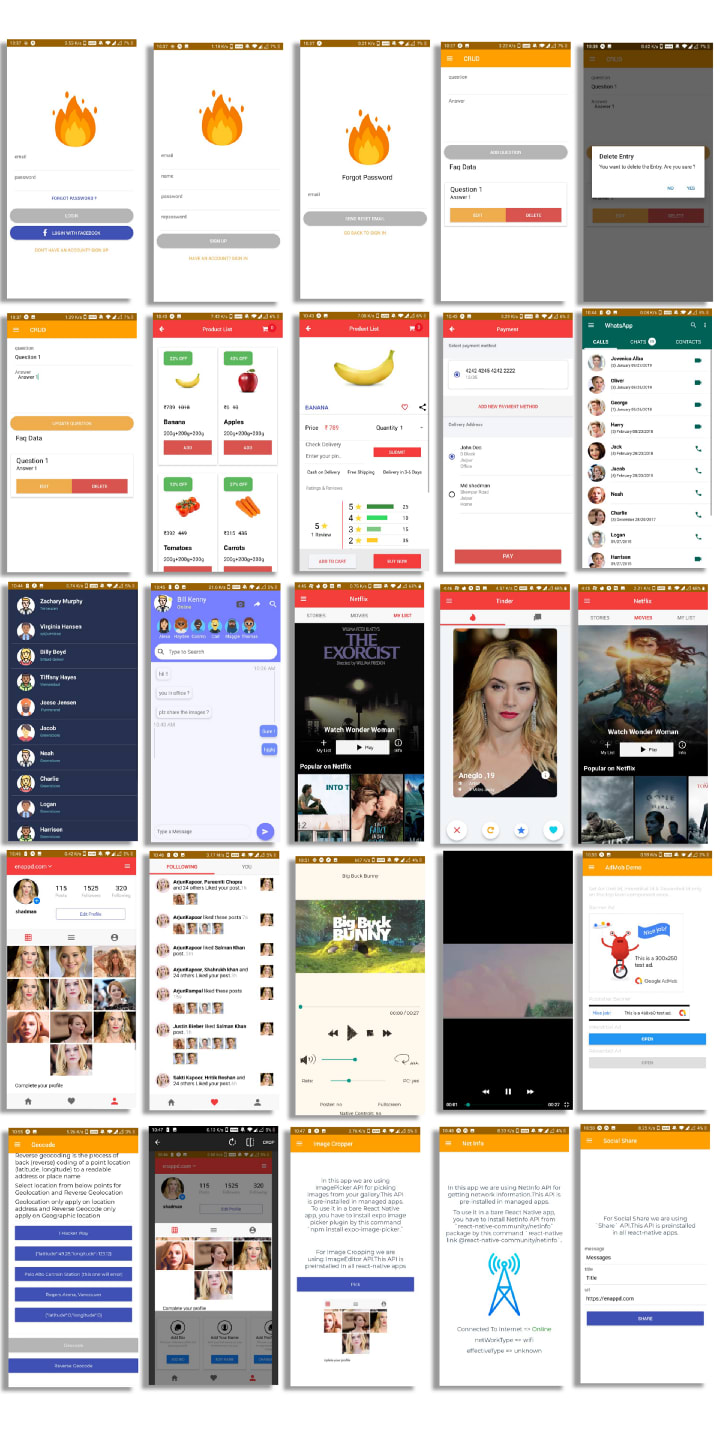 While you can use any editor of your choice to develop your app, you will need to install Android Studio in order to set up the necessary tooling to build your React Native app for Android.

A macOS is required to build projects with native code for iOS. You can follow the Quick Start to learn how to build your app using Expo instead.

How to use React Native Full app

This React Native Template is loaded with a large number of options, layouts, and functionalities. This is a complete starter app to get started with react-native.

Why use a template at all?

There are several benefits of making your app from a template like above. Let’s go through the key benefits

We got to know about the various features of Super React Native App Template and beautifully designed screens that come with it. We also looked into the list of libraries that are used to build this template and got an idea about them as well. We now know that this template is built using the latest trending libraries, helps us to develop our apps instantly and reduces the development cost by a huge margin.