This post is done on a special request from one of our thousands readers. If you have more requests, let me know in the comments

As we all know, advertisements are the major source of income for all tech giants like Google, Facebook, Twitter etc. Google ads are one of the most popular ads out there, and the mobile version of Google ads is what they call AdMob.

Banner: A basic ad format that appears at the top & bottom of the device screen.

Native: Customizable ad format that matches the look & feel of your app. Ads appear inline with app content. Supports video content. For now, Native ads are only possible in Native apps, not in hybrid apps like the ones based on Ionic or React Native.

Let us look at the underlying frameworks for this post. If you are conversant with React Native and Firebase, skip these sections and go to the code segment of the post.

Before we move into the blog, let’s first clarify what framework we are using. We are using React Native, which is one among many hybrid app frameworks available. The closest rivals of React Native are Flutter and Ionic.

React Native is a JavaScript framework for writing natively rendering mobile applications. It’ is based on React, Facebook’s JavaScript library for building user interfaces, but instead of targeting the browser, it targets mobile platforms. Because most of the code you write can be shared between platforms, React Native makes it easy to simultaneously develop for both Android and iOS.

React Native applications render using real mobile UI components, not web-views, and will look and feel like any other native mobile application. React Native also exposes JavaScript interfaces for platform APIs, so your React Native apps can access platform features like the phone camera, or the user’s location. Facebook, Palantir, TaskRabbit etc are already using it in production for user-facing applications.

If you don’t know much about Firebase … you need to catch up with latest tech news. Firebase is the popular stuff in the market today. One can use Firebase to create quick mobile app back-ends, with a ton of built-in and ready-to-integrate features.

Some of the quick integrations available with Firebase are

and much more. Firebase is quickly growing to become the most popular mobile app back-end platform.

So, why use AdMob with Firebase ?

Umm, well it’s not really necessary to use Firebase for AdMob. You can integrate AdMob in your app independent of Firebase. I am using Firebase connected AdMob for two reasons

As an alternative, you can use other React-Native AdMob dependencies for showing ads in your React Native app. I will probably cover one of those in my blogs later.

Enough of story-telling, let’s dive into — how to implement AdMob in React Native apps

We will go in a step-by-step manner to explore the AdMob feature implementation. This is my break-down of the blog

For Admob implementation, all we need from Firebase project is — GoogleService-Info.plist file (for iOS) or google-services.json file for Android

Follow this video for the above steps if you need.

This will create a basic React-native app which you can run in a device or simulator. (either Android or iOS)

We’ll create a simple page with few buttons that will trigger Ads. While banner ad generally doesn’t need a trigger, interstitial ads and reward ads need a trigger. These triggers are generally completion of a level in a game app etc. My basic UI for the ad page looks like this 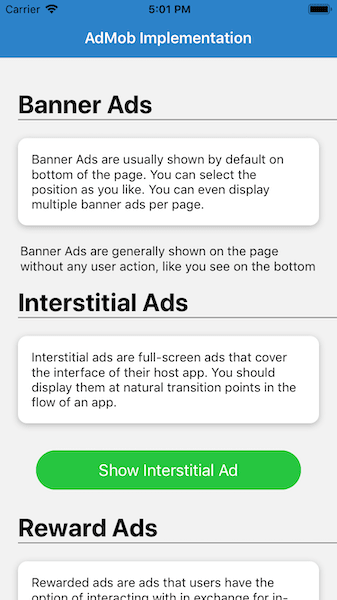 AdMob has a ton of other settings for how, when and where your ads should show up, but all that for later. In this post, we’ll limit the discussion to “How to display basic ad units in a React Native app”

Next, open the project (/ios/{projectName}.xcworkspace) in Xcode editor. Add your GoogleService-Info.plist file to the project by right clicking on the project name and “Add files” to the project, as demonstrated below. Ensure the ‘Copy items if needed’ checkbox is enabled. 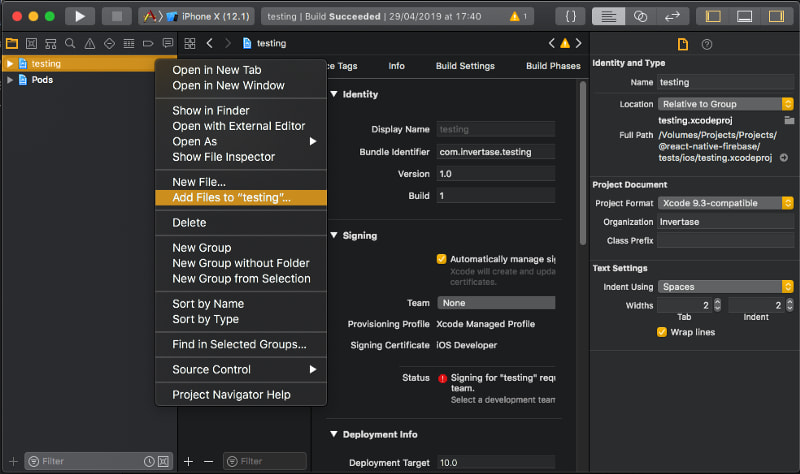 Open the AppDelegate file within your project /ios/{projectName}/AppDelegate.m. At the top of the file import the Firebase module:

Within the didFinishLaunchingWithOptions method, add the configure method:

Rebuild your project by running commands

Once completed, re-run your project in iOS device using

The above steps often lead to some small mistake. If the app doesn’t start up fine, check these

Add the ID to your root level firebase.json file (create one) under the react-native object like following

Rebuild your application for the changes to take effect.

Step 5 — Implement different types of Ads in the app

Once everything is setup, let us implement different types of Ads in the app.

Banner ads are implemented as a <BannerAd> tag itself. You can place it in your React Native app just like any other tag. Make sure you import the dependency

I imported the Banner ad at the bottom of the page, in a View positioned absolute as follows

Here, I have used a test ID TestIds.BANNER . This uses a default test ID provided by AdMob. You will replace this with your production Ad unit ID when you release the app 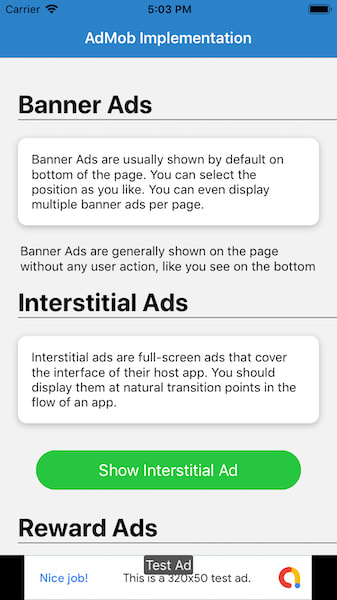 Interstitial Ads work on a trigger. Because these are full page ads, they are not always visible as Banner Ads.

To implement interstitial ads, import the required dependency and follow the code below

Again, TestIds.INTERSTITIAL is a test ID. Replace it with production Ad ID when releasing the app.

.load() method loads the ad. This ad takes some time in loading. That is why .show() is called on the LOADED event. If you call the .show() method immediately after .load() the app with crash.

Finally .show() shows the ad on full screen, like following 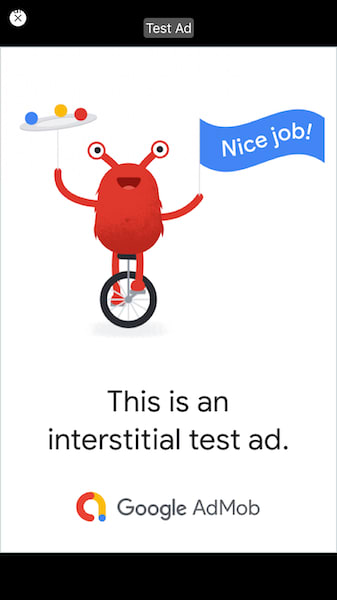 Again, reward Ads are similar to interstitial ads in the trigger mechanism. To implement, import the required dependency and follow the code below

Again, TestIds.REWARDED is a test ID. Replace it with production Ad ID when releasing the app.

.load() method loads the ad. This ad takes some time in loading. That is why .show() is called on the LOADED event. If you call the .show() method immediately after .load() the app with crash.

Reward Ads also have a .EARNED_REWARD event, which is called when the reward ad throws a callback (generally when user has seen the required length of the ad). After this callback, you can provide user with the reward.

Finally .show() shows the ad on full screen. The reward ad will look like this

Step 6: Testing the app on a device

To run the iOS app, you should specify simulator

To run Android app, you should start emulator first (or connect a device), either via Android Studio or adb , then call

Tada ! You have learnt how to implement AdMob ads in your React Native app. 🎉

In this blog, we learned how to implement Google AdMob functionality in React Native app. AdMob functionality is a must for an app where user wants to earn some revenue from ad clicks. This comes in handy when your app has a large number of users, and you do not charge users for anything in the app. So ads become your direct revenue source. You can also combine the interstitial ads and rewards ads with in-app rewards like a level up in a game, extra lives etc.

Now that you have learnt about setting up AdMob in React Native apps, here are some other topics you can look into 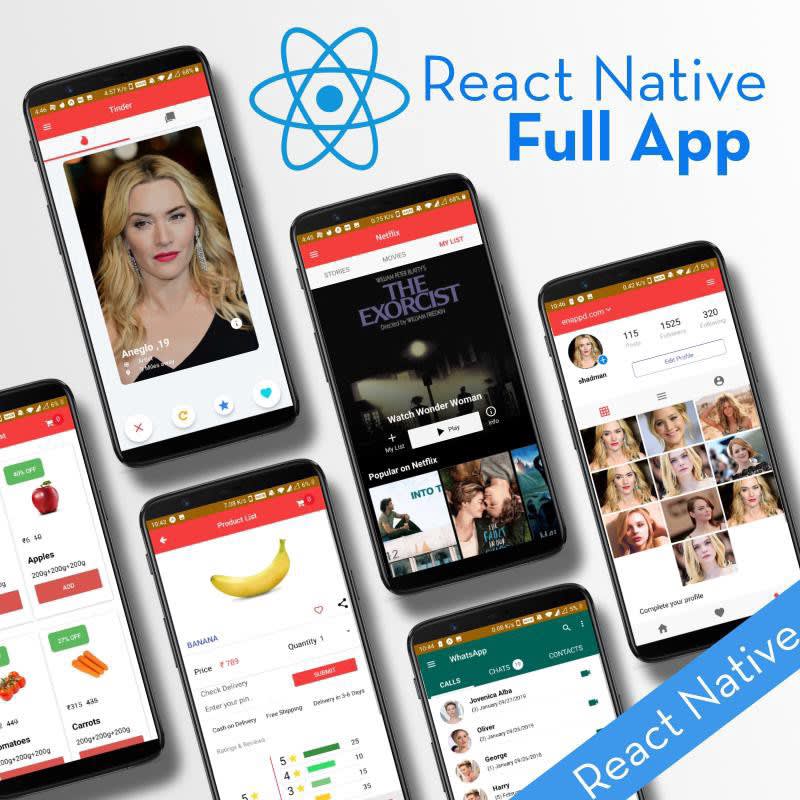