In the first part of this series, I told why I've switched from VS Code to Neovim, but I didn't go deep into how differently Vim works. In this article I write more about these aspects.

In other editors, you just click and start writing. To save a file, just choose "save" on the menu or using the corresponding keyboard shortcut for the action.

This is completely different in Vim: the program begins in a quick edits mode, which does not enable writing text. This mode accepts navigation and commands to change text. To do this, commands are used, which can be simple as a shortcut key, or compound, where more keys are used to achieve a certain action.

For those who have never used it, this sounds very difficult and intimidating, but it is not. With practice, you get used to it and see the advantages.

This is the editor's default mode. To access it, always use the ESC key.

Navigation works as in most editors, arrow keys to move the cursor on the screen, Pageup orPagedown to move between "pages", Home or End to go to the beginning or end of a line. Beside these shortcuts, there are others made just pressing normal keys like letters and symbols. Here are some of them:

Simple editing can be made in this mode.

To delete content, use the d key; it works likes cutting in other editors. The way it will be deleted/cut will depend on the next letter typed:

Copy works basically in the same way as removal. The command used for copying is y, which comes from the word yank. The same key combinations used for deleting work here, but applied to copy content:

And so on, you got the idea.

To paste the content, use the p key. It is worth mentioning that all deleted content is in the clipboard. Using p, will paste after the cursor and using P it will paste before the cursor.

In this mode everything is quite familiar as it is like every other editor. There are several ways to access the mode to write text:

Another way to enter the insertion mode is to use the c command, for change. This follows the same pattern of previously described for removal and copy commands. It clips the content and opens the mode for insertion, very practical. For example, imagine that we have the following HTML markup:

Just position the cursor in the markup and type cit. The result will be like this:

The "|" above represents where the cursor will be, ready to enter new text.

This mode is basically the same as pressing the Insert key: the typed text overwrites the previous one. It is accessed by the R shortcut.

This mode enables text selection. It's activated by the v key. To select the text, just use the arrow keys. Clicking with the right mouse button also activates the mode, in case it is configured.

Commands made after visual mode will only affect the selected area.

This mode is one of the most used, because it is the equivalent of a toolbar. With it we can save the file a file, for example. It is activated by the key :. From there just write the command desired and press Enter. Below are some examples:

Despite being able to use the directional normally, Vim encourages the use of the h, j,k and l keys to move the cursor to the left, low, up and right, respectively. This is due to the fact that the computer used at the time by the Vi developer used a keyboard in which the directional were on that keys. 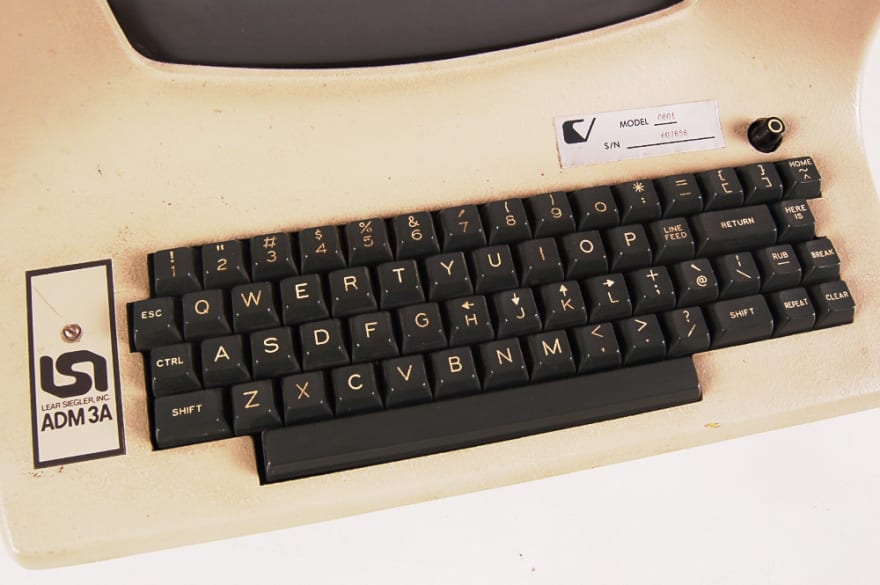 Some aficionados abhor the use of arrow keys. In fact, if you get used to it, you can be very productive, because the keys are closer. Personally, I don't use this.

On the same keyboard above, the Esc was almost in the same position as the Caps Lock key. Upon knowing of this, you see the choice was not so strange, as the position of the Caps Lock key is much more comfortable than that of the current Esc. You can configure the editor to do that. I didn't do it myself.

Here I end this article! I can't teach everything, unfortunately: I don't know everything about it and a blog article is not enough for this purpose. Despite this, I believe this is the basics for you to start using this "scary" editor.

I suggest that as homework, use the "Vim Tutor": it is a command available at the terminal as soon as Vim is installed on the system. When writing vimtutor in the terminal, an instance of Vim opens without any plugins loaded, with a nice text that teaches more deeply every command I quoted here, with practical exercises.

In the next article, I will teach you how to make Vim more useful and beautiful. Because let's get real, it is really ugly and empty at first.

If this article helped you in some way, consider donating. This will help me to create more content like this!

Once suspended, elvessousa will not be able to comment or publish posts until their suspension is removed.

Once unsuspended, elvessousa will be able to comment and publish posts again.

Once unpublished, all posts by elvessousa will become hidden and only accessible to themselves.

If elvessousa is not suspended, they can still re-publish their posts from their dashboard.

Once unpublished, this post will become invisible to the public and only accessible to Elves Sousa.

Thanks for keeping DEV Community 👩‍💻👨‍💻 safe. Here is what you can do to flag elvessousa:

Unflagging elvessousa will restore default visibility to their posts.