I've been using Neovim as my main code editor for a while now, and so far, I haven't changed my mind. I wrote some articles about this editor, and one of them was about creating a simple configuration file that works for both Neovim and Vim. This one still works perfectly, but like everything else in the computer world, there is always another way to achieve the same goals. One of these ways is to configure Neovim using Lua language.

I received a few requests to create a Lua configuration, but I procrastinated until I actually needed to configure Neovim from scratch again. The opportunity came recently, as I needed to set up a Ryzentosh (Hackintosh with a Ryzen processor) for work, and there was a clean Neovim to configure. Before getting into the guide itself, I will comment about a few things. 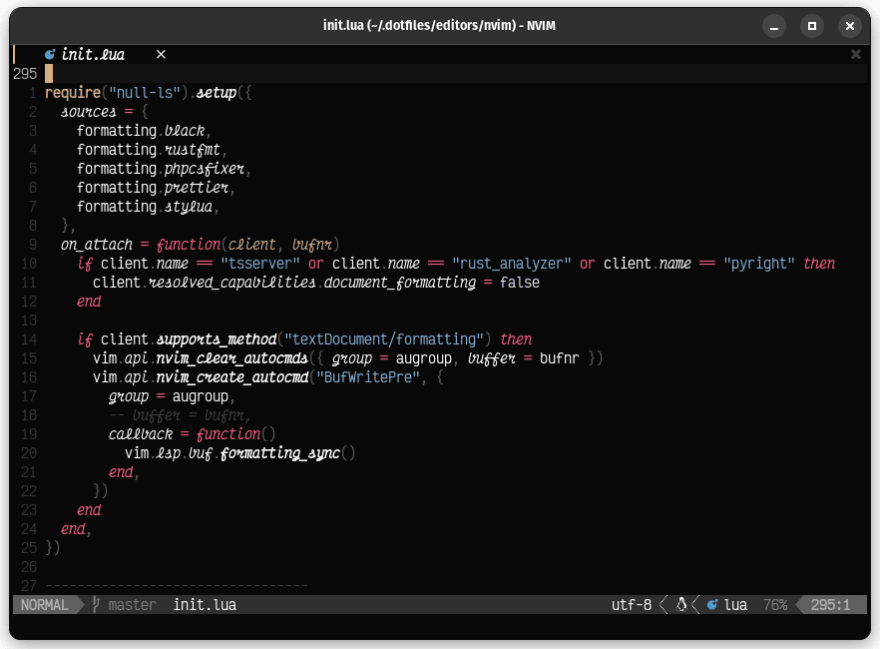 Lua is a programming language created by Brazilians Roberto Ierusalimschy, Waldemar Celes and Luiz Henrique de Figueiredo at PUC/RJ. It is a high-level, multi-paradigm, lightweight language with dynamic typing and automatic garbage collection.

It was made to automate and extend more complex applications, such as Petrobras projects, game engines, embedded systems, and other applications such as Neovim.

As being a satellite language has always been one of its goals, "Lua" (Moon in Portuguese) is quite an appropriate name. Its ease of learning and considerable speed have been positive points in its adoption.

This article will not make you a master of the language, nor is that the purpose. But you will know enough to configure Neovim.

About the config file 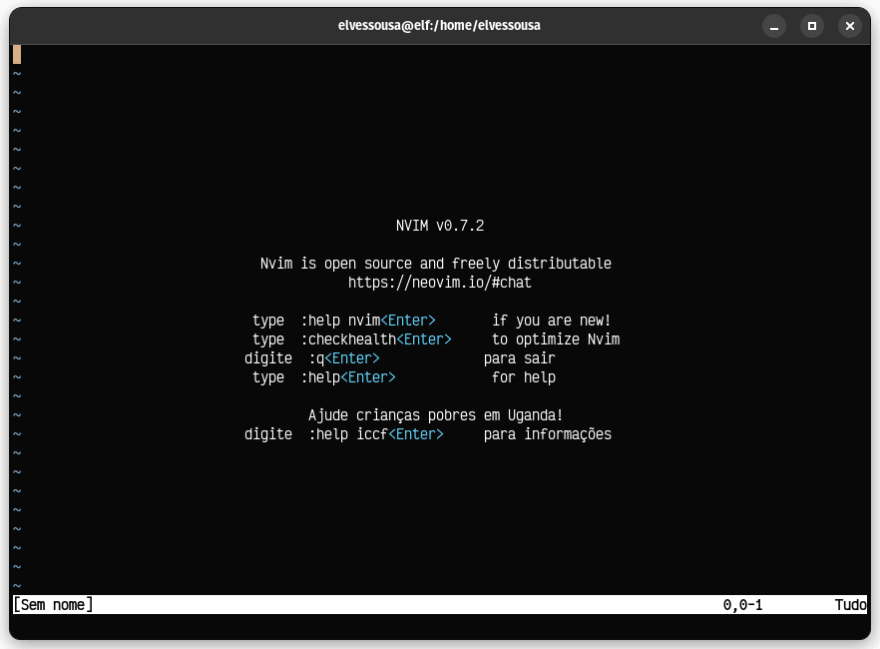 In the init.vim I made in another article, it was possible to create a single file that contains everything needed to have a comfortable experience with Neovim. With the init.lua that will be created here, this is also possible, and that's what I propose. On another occasion, we will separate it into several files, as it seems to be the standard way.

If you're new to Neovim, don't try to follow this guide. Start with the VimScript configuration file created in the other article, and once you're more comfortable with the environment, come back!

To get started, create an init.lua file in the .config/nvim directory, located in your user folder:

The goal is basically to translate the init.vim I already have into Lua language.

In VimScript, each option is set with the keyword set. In Lua, you use vim.opt.[option-name], which, let's face it, is not very readable if repeated several times. So, I decided to allocate vim.opt in a local variable called set (wow!). This makes everything more familiar and readable.

Here are the options I use:

If you've used Neovim, you're probably already familiar with several of these options, but if you're not, here's an explanation of each one:

To see them in action, just quit Neovim and run it again (you know how to do that, don't you?), or go into shift + : command mode and type luafile %. This will read the init.lua file and apply the options to the current instance.

Note the vim.cmd: it makes possible to use VimScript in a .lua file. In this case, it's a very practical way to write less code. 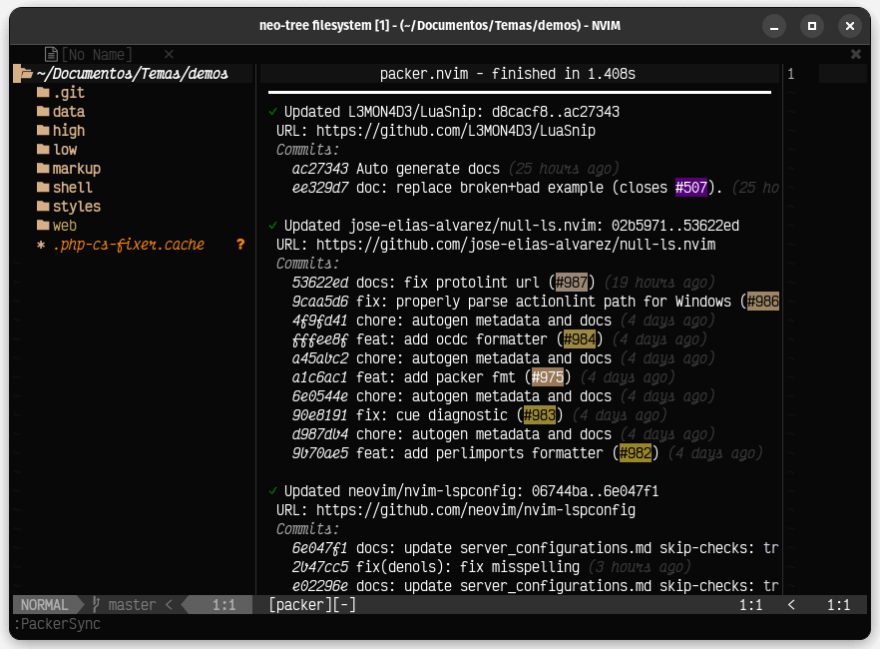 To install plugins, you need to install a manager first. Packer will be used for this, as it is made in Lua and obviously supports configuration in this language.

If you are using macOS or Linux, just run this command in the terminal:

After restarting Neovim, you will have a series of commands that will make installing, updating and removing plugins much easier.

To add it to our configuration file, just add the following lines:

Note the require("packer"): this is the way to import files in Lua. For anyone who has used NodeJS, this is very familiar. Following that, a command in VimScript is added so that Neovim recognizes the existence of the Packer package.

To add plugins to be installed, simply include use("user-in-github/repository"), in the anonymous function in packer.startup(). The first plugin to be added will be Packer itself:

This way we can update Packer as well as other plugins.

Plugins used in this setup

A brief explanation of the function of each of them:

To install, as we did the other time with VimPlug, it is necessary to use a command to install. However, unlike VimPlug, a single Packer command is responsible for removing, adding or updating the extensions: :PackerSync.

When using this command, a side split will appear and show the changes that Packer has made to your Neovim installation. Remember to always use this command when adding or removing plugins from your list.

In addition to installing the files with Packer, you need to initialize the plugins so that they can be used in Neovim. Some of them work without options, others need more settings. To see some extensions working, we'll add the simplest ones first:

This is a pattern. Plugins are usually initialized with require("plugin-name").setup().

Note that in the Autopairs plugin, I put an option to disable it from working in the Telescope window, to avoid unwanted behavior. 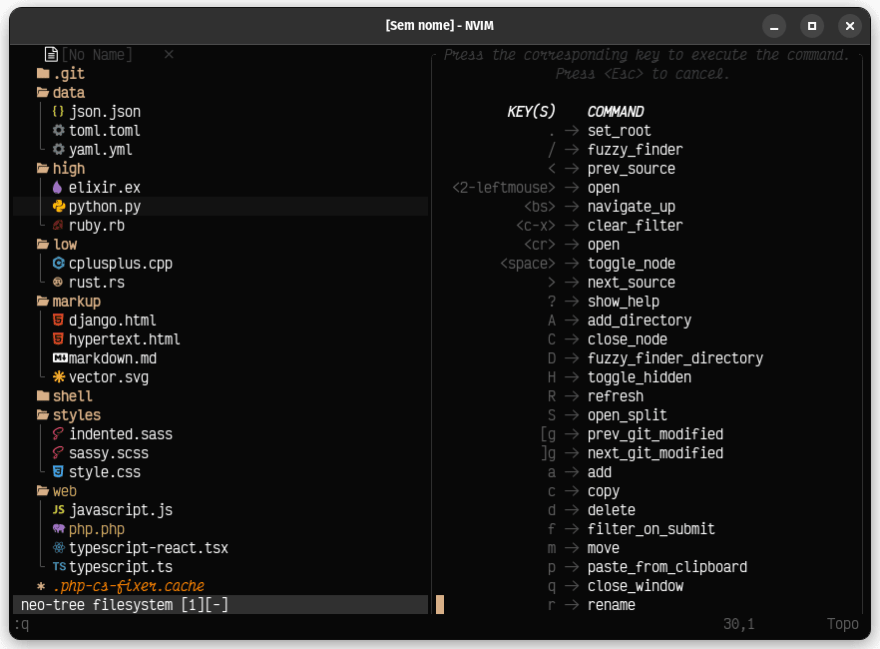 Neo Tree is a NetRW replacement. By default, it already works fine, but I recommend adding the options below:

Explanation of the options: 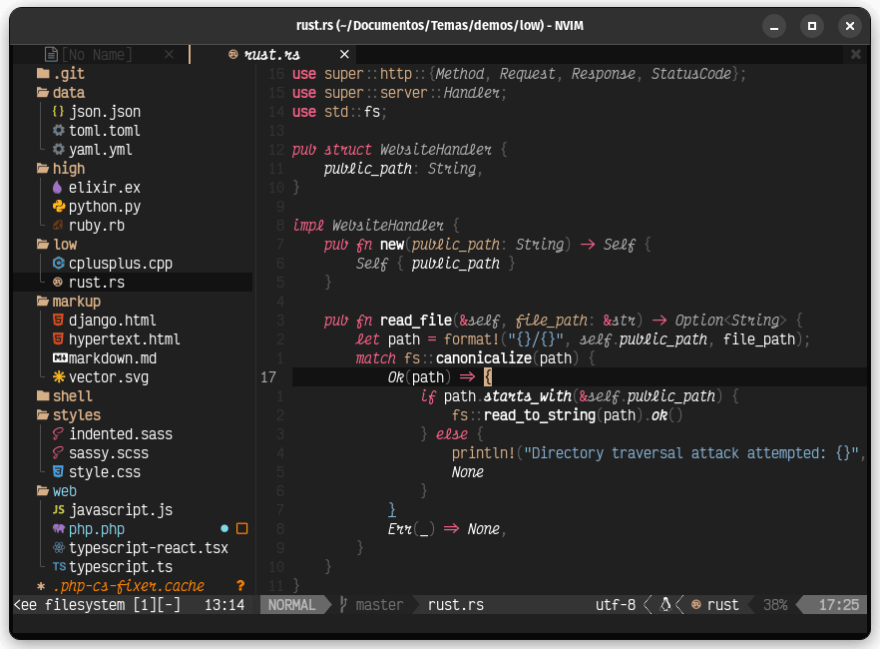 Sobrio: The theme I made and use

Depending on the theme you use, the configuration will vary. If the theme you chose has configuration available in Lua, the process is very similar to plugins. In the case of my theme, Sobrio, I just added it to the vim.cmd I mentioned at the beginning of this article: 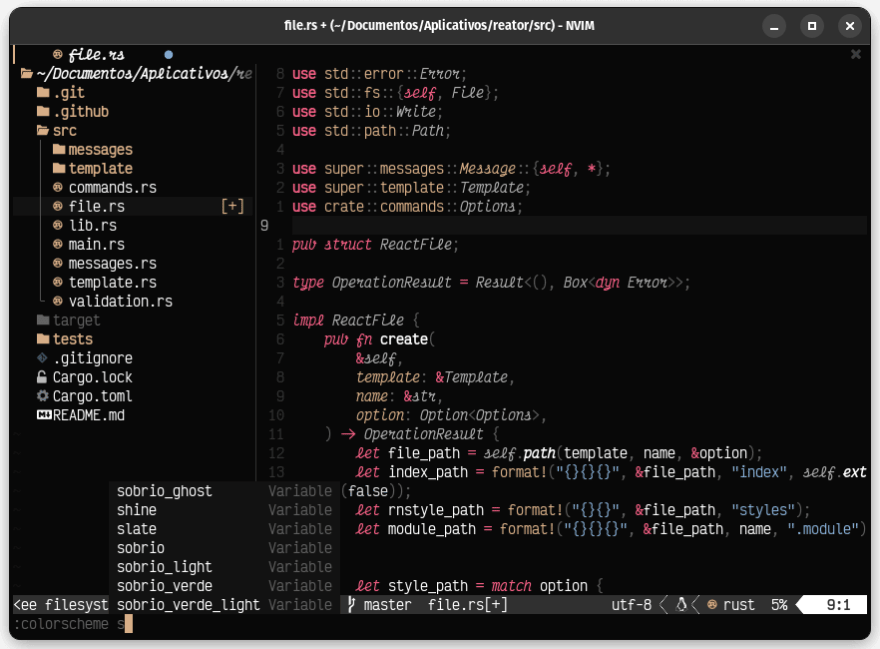 Sobrio Ghost: variant of the Sobrio theme, with transparent background

This theme I made has other variants, such as a light version (Sobrio Light), one with alternative colors (Sobrio Verde) and one with a transparent background (Sobrio Ghost).

TreeSitter is an extension responsible for the syntax highlighting presented on the screen. The result is usually much better than the default parser in Neovim.

Below is a sample configuration compatible with my workflow:

Brief explanation of the options: 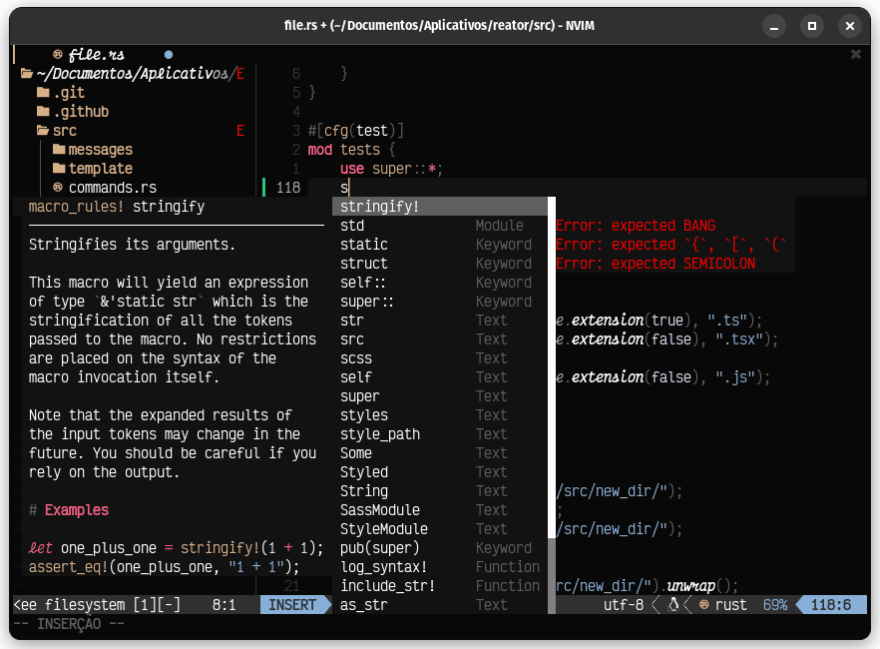 Neovim CMP or nvim-cmp is an extension that enables code completion in Neovim. For it to work, several other related extensions need to be present.

Most of this code I inserted according to the suggestions available in the author's repository. The only thing I did was adapting it for use with the LuaSnip suggestion engine.

In the snippet option, you configure which suggestion engine will be used. In mapping, keyboard shortcuts to CMP commands are added. The sources option lets you sort the suggestion sources by priority. The code above sets the following the priorities:

The cmp.setup.filetypes block allows you to configure the behavior of Neovim CMP for a given file type. In this case, rules for using cmp_git in Git-related operations.

cmp.setup.cmdline configures options for Neovim's command mode. The fact that there are two blocks is because commands can start with the characters / or : and in each case the priorities of suggestions change.

NullLS is an extension that provides various tools based on the language server. One such tool is code formatting.

By default, nothing is done. You need to add some settings for NullLS to kick in. Below is sample setup for those who use Python, Rust, PHP, JavaScript/TypeScript, HTML, CSS/SCSS and Lua.

In the sources option, you list the code formatting sources that will be used. The list of supported formatters is in the project repository. Note that it is not enough to just add to the list, the executable of each one must be installed on the machine to work.

The function in on_attach has two uses:

Each formatter has its own way of installing, but in general, they are available in three ways:

To install Stylua with Pacman on Arch Linux:

Using Homebrew, you can install PHP CS Fixer as follows:

By the way, Homebrew is not just for macOs. It's available for Linux and Windows, too.

Neovim has a built-in language detector. It can be configured from scratch, but to help in this process, the Neovim team made the Neovim LSP Config extension. With it, just start lspconfig mentioning the name of the language server you want to activate in Neovim. Here's an example below:

The capabilities option was used to add snippets and code suggestions based on the programming language. The servers setup above were Pyright for Python, PhpActor for PHP, TSServer for Javascript/TypeScript, Rust Analyzer for Rust and Emmet to make HTML and CSS/Sass authoring more supportable.

Language servers must also have their executables present on the machine to work. Fortunately, the Neovim LSP Installer extension helps with this. Just run the command :LSPInstallInfo and a list of several servers will appear. 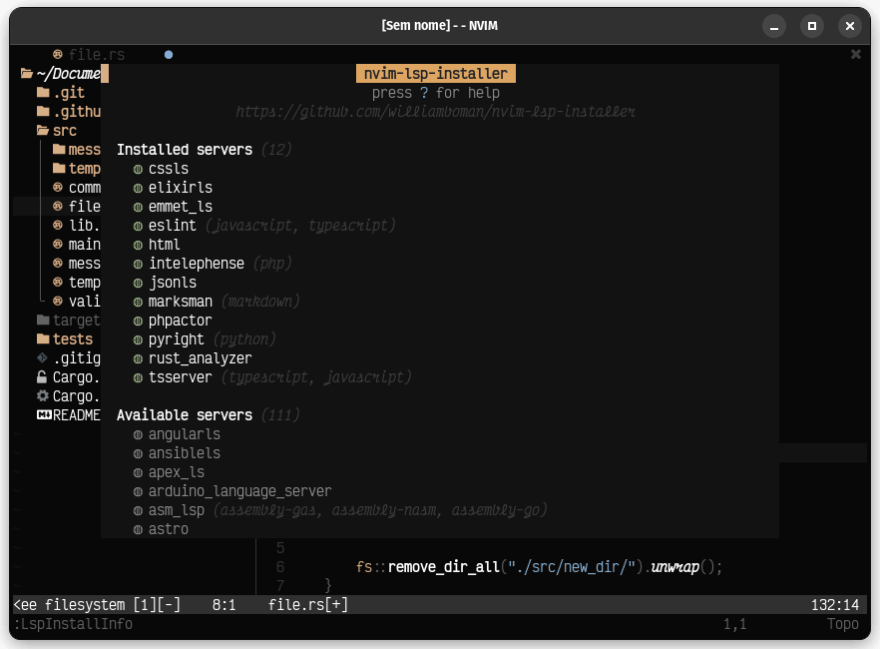 To install, just press i on the desired server name.
To update, press u. For uninstalling, press x. Everything is very visual, and if you get lost, just press ? to access help.

Despite being very useful and much simpler to configure, it is slower. Before writing this article I used it daily, and Neovim with LSP configured in Lua proved to be much snappier.

Probably, the fact that CoC is done in TypeScript and VimScript, languages slower than Lua, are the cause of this.

Nothing new here. In the same way I did with the options at the beginning of the article, I placed the functions with less readable names in local variables with names similar to those used in VimScript.

One thing I hated as soon as I started using this setup was errors in virtual text on the same line. The error message is never concise enough to fit on the screen, and in the case of multiple occurrences, the readability is greatly affected. 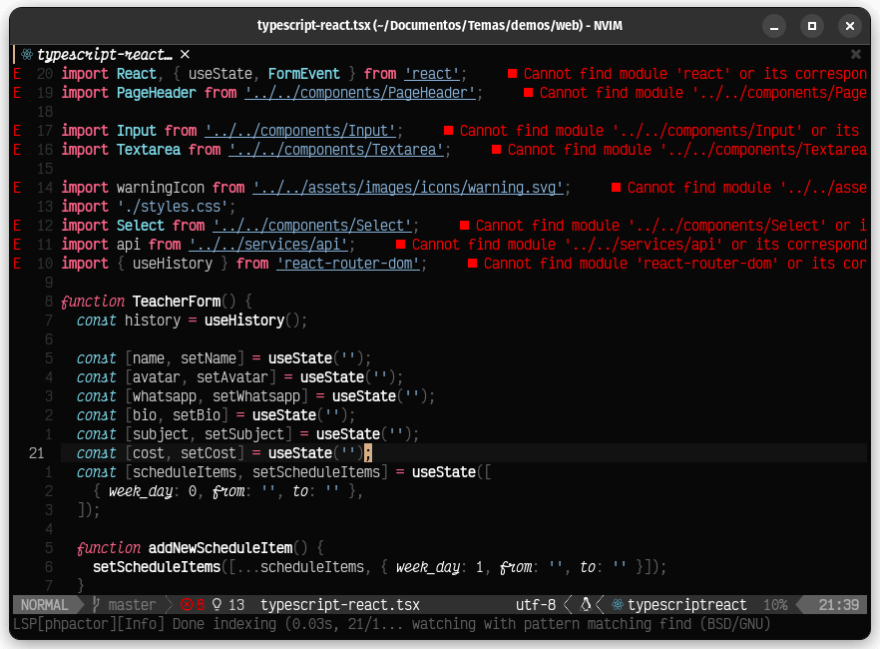 With the code below, errors appear in floating boxes when holding the cursor over the error. 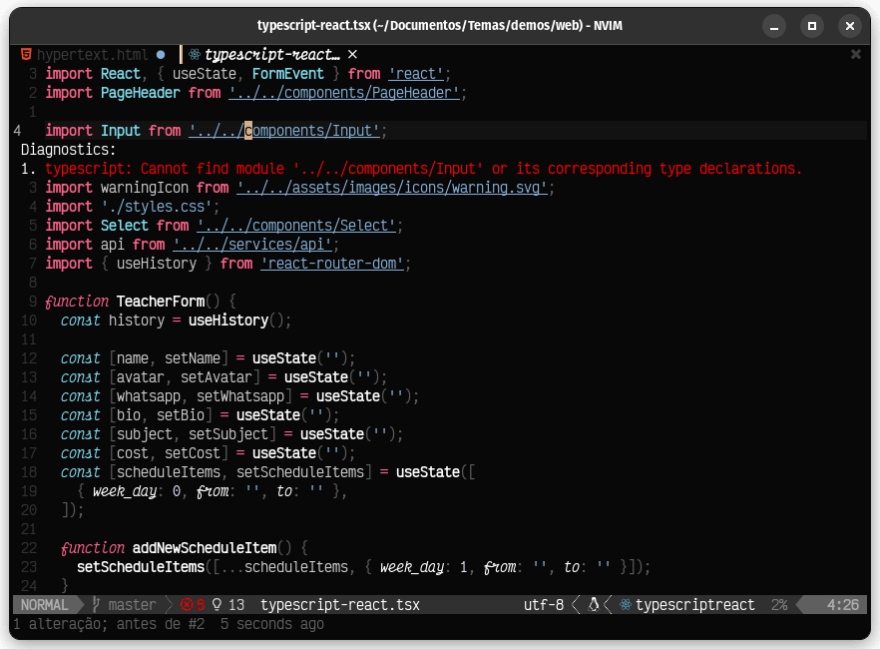 If this doesn't bother you, just ignore this part.

Done! These lines are enough to have a working Neovim with a configuration file in Lua.

If you followed exactly what was shown so far, your init.lua ended up with about 380 lines, much more than the VimScript version (154 lines, adding init.vim and coc-settings.json).

To be honest, I thought it would be more than 500 lines, but I managed to reduce it a lot. The fact that I did it in a single file contributed to this, encouraging me to keep only the essentials. I did it that way too, because until the moment where I write these lines, I haven't found a tutorial that uses only one file. Usually, folders and folders with several Lua files are created in the process, which cause a lot of confusion in the beginning.

For the more experienced, obviously this configuration does not suit everything, but in my case, I was very satisfied with the result. In the next article, this file will be splitted into "modules", to improve the extensibility of this configuration.

If you want to check out the complete code, there's a link to my .dotfiles repository below.

If this article helped you in some way, consider donating. This will help me to create more content like this!

Once suspended, elvessousa will not be able to comment or publish posts until their suspension is removed.

Once unsuspended, elvessousa will be able to comment and publish posts again.

Once unpublished, all posts by elvessousa will become hidden and only accessible to themselves.

If elvessousa is not suspended, they can still re-publish their posts from their dashboard.

Once unpublished, this post will become invisible to the public and only accessible to Elves Sousa.

Thanks for keeping DEV Community 👩‍💻👨‍💻 safe. Here is what you can do to flag elvessousa:

Unflagging elvessousa will restore default visibility to their posts.