Do you remember the time before front-end frameworks and build tools, where you would sprinkle some JavaScript on top of your HTML to create interactivity? Code up your HTML documents, preview them in the browser without tools like Webpack, then push them to your webserver using FTP?
I sure do. 👴

What if I told you, you can build modern web apps and have still have a smooth development workflow without any build tools?

In this article I'm going to implement the TodoMVC app without any build tools and only use native JS functions supported by evergreen browsers (sorry Internet Explorer, it's time for you to leave).

I will use some libraries related to React, but you could write the app using anything you prefer (or no library at all). What matters most is the fact that we simplify our development process by cutting out tools that are required to work with these modern day frameworks. The starting point is just a HTML document with a <script> that initializes our app, while SPAs often start from an index.js entry point and try to control the document from there.

Here's the source code and the end result:

When building an interactive web app, developers usually reach for frameworks such as React, Angular, Vue, Svelte, to name a few. These frameworks are mostly abstractions and best practises to help you create modular code while staying productive. They all come with a set of supporting tools to smooth out the development process: translate modern JavaScript features to something all target browsers understand, manage dependencies, optimize the output code, etc.

These interactive client side apps are often Single-Page Applications: a web application that loads a single document and then updates the page content using JavaScript by loading other modules and fetching data from a REST API.

Not every website needs to be a SPA, mind you. In fact, the approach below could be used in a good old multi-page website, where you sprinkle the JS on top of the page to create the interactive ToDo functionality.

We are going to build a simple TODO application such as this one, which is fully client side and has a clear scope.

Why would you go buildless?

Let's start with the main reasons we still need bundlers in 2022:

Pika is doing an awesome job at rethinking this whole process and it questions why we need web bundlers today at all. Check out this great talk:

The reason to ditch all this tooling seems obvious: it simplifies development, because you only need to deal with native JavaScript. No tools to learn, no configurations to manage, no more waiting for your app to start up.

You get some additional benefits too:

You win some, you lose some.

Just because we aren't allowed to use build tools, does not mean we can't use any NPM libraries. To load them, we have several options.

Content Delivery Networks (CDNs) are free online services that serve NPM packages over the network. Examples are jsDelivr, unpkg and SkyPack. We will be using these services to import the libraries we want to use.

You can import those packages using a script tag, for example:

ES modules allow you to import directly from a URL:

Learn more about ES imports in this article

Libraries for the buildless route

We are looking for libraries that use ES modules, so we can plop them into our app and use them like any other utility function.

I feel very productive writing front-end UI components in React using JSX, so I wanted to have something similar for this app. After some googling I stumbled upon HTM, which promises JSX-like syntax without bundling, so I decided to give that a try. HTM plays nicely with Preact (a leaner version of React with only slight differences).

Coming from React, the biggest difference is the way you write the JSX:

The state can be manipulated outside the React/Preact lifecycle too using vanilla JS. Persisting the app state to localStorage is also trivial.

The library is light-weight and easy to work with. Valtio is certainly not required for the no-build app, but it felt like a good match for this setup.

I would like to use a component based development approach without writing everything from scratch, so I decided to use HTM with Preact. This allows me to write JSX-like syntax without a transpiler.

I won't dive too deep into the implementation itself, but you can find the source on GitHub.

Create an index.html file and add a <script> tag and point it to js/index.mjs - the starting point of the app:

We can import the CSS for our TODO app directly from a CDN like so:

In the index.mjs file we can import() any other modules that we need. From here we can start writing modular components as we would do when using React!

Beware that we need to write the full path, including extension, when importing a module - this is how ESM works.

All our third party modules are defined in js/modules.mjs, which I'll explain next.

I'm using ReverseHTTP as a CDN because it can produce an optimized bundle of packages in a single HTTP request. You only need to put a comma separated list of modules in the URL and the service sends an optimized, cached bundle back. It's like having your node_modules folder in the cloud.

Here you can see what is inside the bundle that I'm using for the app: 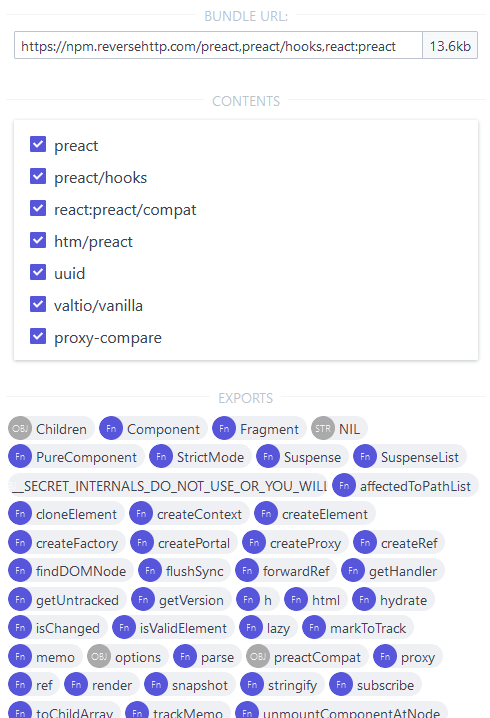 To keep things a bit maintainable, I import the bundle once in modules.mjs and then re-export everything, so my I can reference to a centralized point in my own code.

Then I can just import anything from this modules file:

This stuff is pretty wild. 😅

Now we only need to some kind of static file server so we can preview the app in our browser. You can use the VSCode Live Preview extension or use a simple static server like this:

When using the Chrome developer tools, you can see in the network tab that imported modules are loaded individually: 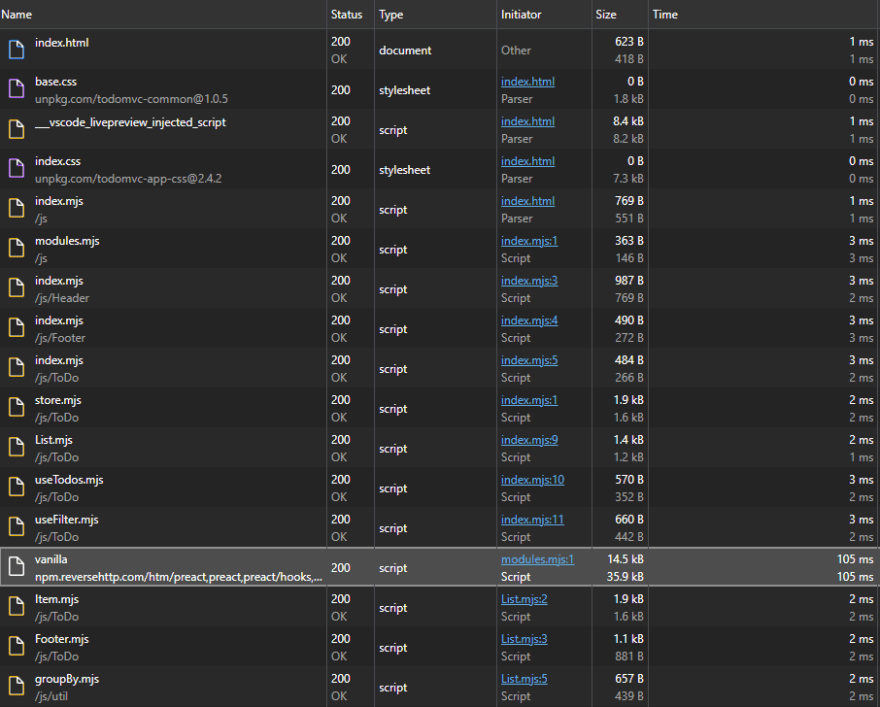 Creating an app without a bundler was a fun and overall a pretty smooth experience. ES6 has all the language features needed to create apps with a great developer experience. We've seen how dependencies can be imported from a CDN to add third party code to our app without the need for extra tools.

Still, I probably wouldn't go without a bundler for production apps in 2022. Choosing which tools to use is a trade-off between complexity of the build process and productivity + optimizations that you get by using these tools.

Pika is a great initiative that moves the complexity of build tools away from the app. It is a step towards a simpler development process. It's nice to see that the JS ecosystem is moving towards ES modules, which makes a lot of sense to me.

What is Z-Index in CSS3 and why we use it?

Once suspended, ekeijl will not be able to comment or publish posts until their suspension is removed.

Once unsuspended, ekeijl will be able to comment and publish posts again.

Once unpublished, all posts by ekeijl will become hidden and only accessible to themselves.

If ekeijl is not suspended, they can still re-publish their posts from their dashboard.

Once unpublished, this post will become invisible to the public and only accessible to Edwin.

Thanks for keeping DEV Community 👩‍💻👨‍💻 safe. Here is what you can do to flag ekeijl:

Unflagging ekeijl will restore default visibility to their posts.