Microsoft will finally stop supporting Internet Explorer 11 on June 15, 2022. That is RIGHT NOW!

If a Windows 10 or Windows 11 user tries to open IE after this date, the Edge browser will launch instead (or the user will be taken to the download page for Edge). 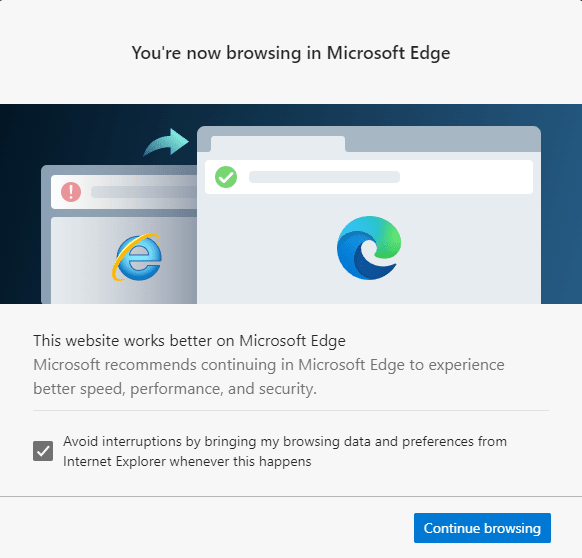 There is an IE11 compatibility mode to support legacy apps, but it may not work exactly the same. This legacy mode is supported until 2029, so we won't be completely rid of Internet Explorer for some time. However, if you are a developer that is building modern web apps, I think it's better to drop support for Internet Explorer completely.

In this article, I will explain what the problems of supporting Internet Explorer are and how you can move to a better alternative.

What's the problem with IE11?

According to Microsoft itself, IE is not a browser but a compatibility solution for legacy apps. New browser features are not supported by it, which means new apps do not work out of the box in IE. By using IE, you are effectively going back in time to experience the web as if it were 2013 (the most recent updates being only security patches).

The global market share (desktop - April '22) of IE is as low as 0.4%, compared to 64% for Chrome, 10% for Edge, 10% for Safari and 7.9% for Firefox. So who is still using it? Mostly users of legacy applications, people who work at companies with strict browser policies and... Japan, apparently.

From a technical perspective, developers that need to support IE cannot make full use of new browser features in their apps that work out of the box in evergreen browsers such as Chrome, Firefox and Microsoft's newest Edge browser.

IE11 only works with an older version of JavaScript, namely ECMAScript 5 (ES5). Developers can use tools like Babel so they can still write modern JavaScript (ES6 and beyond), which gets translated back to ES5 so it works in every browser. This "transpilation" inevitably creates overhead in the resulting code bundle. Furthermore, some third party JavaScript libraries may only be available in ES6, so an app developer has to make additional effort to ensure those libraries are transpiled as well.

Other frameworks and tools are also abandoning IE11: Webpack 5 bundles for ES6 by default, React 18 and CRA dropped support, to name a few. If you want to stay up to date, that means you will need to make the decision at some point.

Dropping support for a browser means that you potentially lose revenue of its users. A bigger problem, however, is that supporting IE11 causes a degraded performance for all other browsers. It will also lock your app out of innovative new features such as Progressive Web App features (unless you apply graceful degradation).

This page compares supported browser features between IE11 and Edge version 100. The length of this list is staggering, to be honest. Some notable features:

Missing JS language features I personally use almost every day:

Consider the following piece of code where I showcase some ES6 features:

This code doesn't do anything useful, but if you press F12 in a modern browser to open your developer tools and paste it in the console, it will run just fine.

Now watch the result if we transpile this code using Babel to something that IE11 understands. If you scroll down to line 11 in the frame on the right you will see something that looks like our original function. All the cruft above it is required to make it run in old browsers.

Benefits of dropping IE11 in your web app

How to phase out IE11

As a developer, you can lead the discussion about whether or not to support IE11 with technical arguments mentioned above. Make dropping IE11 support a company goal! Put it on a roadmap! This is not just a development issue, other departments should also contribute and inform customers about the plan. As with most things in life: communication is key!

How to drop IE11 support from your web app

The following steps explain how to optimize your project to drop IE11 support. Sometimes we need to tell our build tools that they don't need to transpile code for older browsers. The production bundle will no longer include patches for missing features, which will save you some precious bytes.

If you are developing a web application, you are most likely using technologies such as Babel with the preset-env plugin and Webpack to bundle your code. You can set a browserslist (docs) property in package.json (or .browserslistrc file) to set the browsers you want to target:

You can customize the query using this tool.

Furthermore, some Babel plugins for ES6 language features can be removed from your project and from the babel configuration, if you were still using them. Check this list and remove them from your project.

Note: These plugins are all included in preset-env, so chances are small you were using them. Still worth checking though.

Most frameworks and tools will automatically use the browserslist configuration. Just because your framework says it does not support IE11 doesn't mean the code it produces is optimized for ES6. Sometimes you still need to set the browserslist yourself.

Here is the behaviour of some of those tools:

If you want to show at least something to IE users, instead of an empty, broken page, you could use the <script> tag with a nomodule attribute. This is only used by browsers that don't support JS modules, which happens to be IE!

You could go down the path of creating one ES5 bundle for IE users and an ES6+ bundle for other browsers. This technique is called differential serving. But now that IE11 is no longer supported, you should really ask yourself if this is worth the effort.

So should your app still support IE? Unless you are working on a legacy app for a customer with specific needs, the answer is probably not. Microsoft does not even support IE in its own Teams app. You should at least have a plan to move away from supporting IE and inform your customers about it.

Ask yourself: What is the cost of supporting IE11, in terms of time spent on maintenance, fixing obscure bugs, code complexity, technical debt, negative performance impact, exceptions in the build process and even testing?

It's time to move forward and start writing code for the modern web.

How to remove a specific item from an array

Once suspended, ekeijl will not be able to comment or publish posts until their suspension is removed.

Once unsuspended, ekeijl will be able to comment and publish posts again.

Once unpublished, all posts by ekeijl will become hidden and only accessible to themselves.

If ekeijl is not suspended, they can still re-publish their posts from their dashboard.