In the previous post, we deployed the public side of our infrastructure. In this part, we will deploy the whole stack. Which consists of the followings:

You can check out the source code for this part here

The following is the diagram of our infrastructure by the end of this part: 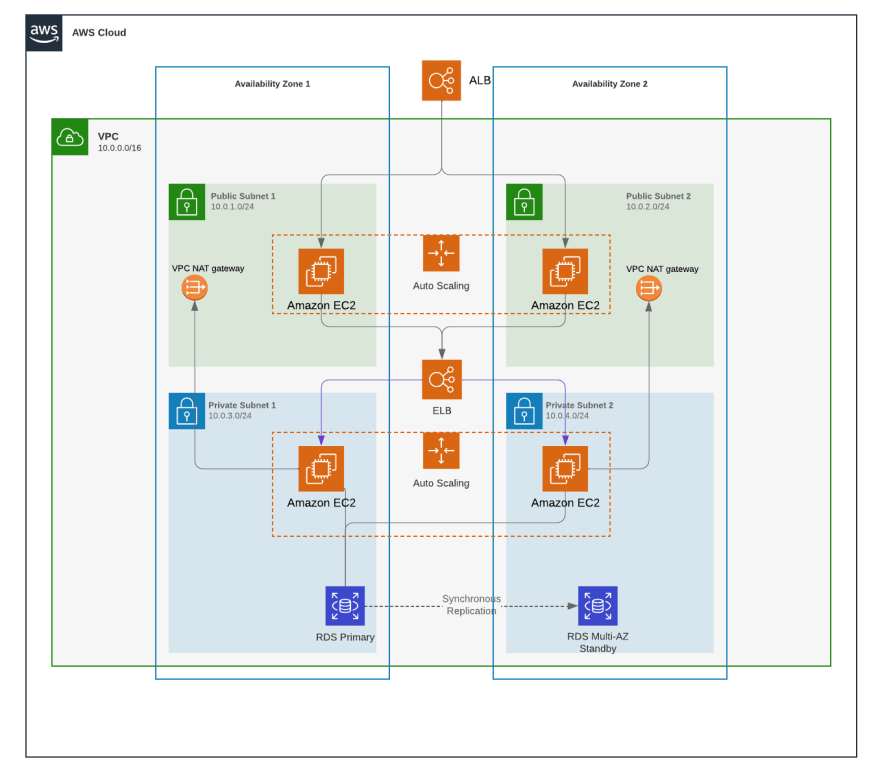 Our application consists of 2 tiers that will be deployed to the EC2 instances as docker containers:

To keep it simple, our presentation tier simply forward requests to the business tier, that in turn run sql queries on the rds instance.

There is a setup-ecrs.sh script that will build these application images and push them to separate ECrs repositories. You can inspect the script for more details.

To run the script, first run chmod +x setup-ecrs.sh, this will assign executable permission on our script. Then make sure you have aws cli installed and configured, we also need docker to be running, and simply type: ./setup-ecrs.sh

Building on what we did in part 1, we will add another Load Balancer. This one is an internal LB, that will forward the requests coming from the public presentation instances to the private application instances.

It is also worth mentioning that we created 2 Launch Templates and 2 autoscaling groups (one for the presentation tier, and one for the application tier).

To allow traffic between the load balancers, public, and private instances, we added a security group for each component, these can be viewed here.

We added a module for rds. Which will basically provision an rds instance that the application EC2 instances will query for data.

This module will create 3 resources:

The module will export the rds's address that is needed by the application tier.

We added 2 Nat Gateways that will allow the EC2 instances in the private subnet (the application tier) to access the internet to download some packages to deploy the docker image.

The presentation tier EC2 instances are public and already have access to the internet, so they can download the needed packages without extra steps.

We assigned an Elastic IP address to each of the Nat Gatweways.

Our EC2 instances need to access ECR to pull the docker images of our applications. To allow this, we created an instance role, that gives EC2 access to ECR.

As we said already, we have 2 launch templates, one for the business layer and another for the presentation layer.

We created 2 user data files that the launch templates will reference.

This script will install docker and run it. It will also login to the ECR registry so we can run our presentation tier docker container.

As you can see we are passing the APPLICATION_LOAD_BALANCER dns name as an environment variable to the docker container, since our application needs it to forward client requests to the business tier.

In the Launch template we are referencing this script:

The ecr_url is the url for the presentation ECR repository that was created when running the setup-ecrs.sh script.

We are passing the RDS instance details, such as username, password, etc ...

As mentioned earlier, make sure to run ./setup-ecrs.sh prior to deploying the infrastructure. Since our EC2 instances will download the docker images from the ECRs repositories.

We have a terraform.example.tfvars that holds all our variables values. Change the file name to terraform.tfvars, so when we terraform apply our changes, it is picked up automatically.

Once complete, go ahead and run terraform apply, and type yes to approve the changes.

It might take a while, since we are provisioning a couple of resources, and especially the RDS instance takes some time.

If all goes as planned, the deployment is successful and you get the dns url for the front facing load balancer:

Now that we have the Front end Load Balancer's dns, we can test the application by simply visiting front-end-lb-**********.us-east-1.elb.amazonaws.com/ which will printout the a hello message with the server's hostname

We can call the front-end-lb-**********.us-east-1.elb.amazonaws.com/init endpoint, that forward the request to the presentation layer, which forwards the requests to the application layer (via the internal Load Balancer) that finally creates a table called users, and adds 2 users in the table, you can view the code here:

Keeping in mind that some of the services will incur some charges, don't forget to clean up the environment, you can do so by running terraform apply -destroy -auto-approve, followed by ./destroy-ecrs.sh which will delete the ECR repositories that store our docker images.

In this post, we completed creating the infrastructure. We created a main VPC, with public and private subnets, an Internet Gateway, Nat Gateways, , Load Balancers, Autoscaling Groups and so on ...

We saw how to provision and destroy our application using terraform.

However, you might have noticed that the application's lifecycle is tightly coupled with the infrastructure's lifecycle. In the coming blog, we will see how we can split them to their own lifecycles and add some refactoring to our scripts.

How to mock AWS SDK with Jest

Once suspended, eelayoubi will not be able to comment or publish posts until their suspension is removed.

Once unsuspended, eelayoubi will be able to comment and publish posts again.

Once unpublished, all posts by eelayoubi will become hidden and only accessible to themselves.

If eelayoubi is not suspended, they can still re-publish their posts from their dashboard.