Django is a popular Python open-source web development framework used for rapid web development and clean, pragmatic design. It is a robust and approachable framework that lets you focus on your application by having salient parts pre-baked that are fairly standard practice. This framework makes it easier to focus on writing apps instead of reinventing the wheel.

Django is used in all sorts of tech stacks, including Instagram, Pinterest, Mozilla, and Eventbrite. Companies everywhere are actively using Django and invested in its development. In 2020, it is the 4th most wanted web framework according to StackOverflow.

Today, we will introduce Django and build a program from scratch. If you want to get started today, knowledge of the following concepts will be helpful.

In this article, we will look at:

Take your Python web dev skills to the next level

Django is a high-level, web framework written in Python for rapid development and pragmatic design. A framework is simply a collection of modules that are grouped together for creating web applications from a reliable, pre-existing existing source. Django offers a large collection of theses modules.

Django was created in 2003 when web developers working for a newspaper company in Lawrence, Kansas, needed a better way to organize their code. Because the developers were surrounded by many newspaper journalists, clear documentation became an integral part of the project that became known as the “Django” project.

Django has since blossomed into a massive online open-source community that has a solution for just about everything you can think of, from authentication to content management systems.

There are several benefits to using Django over other possible solutions:

With Django’s versatility, it’s certainly capable of meeting your project’s needs. Companies like Spotify, Pinterest, National Geographic, and Dropbox use Django for their business models. Let’s take a look next at the common design patterns that these companies have used so you can get a feel for the shape of a typical project.

There are three major components to Django’s architecture: elements that aid in working with the database, a template system that works for people who don’t program, and a framework that automates a lot of the website management. This lends itself to a Model, View, Template design pattern: 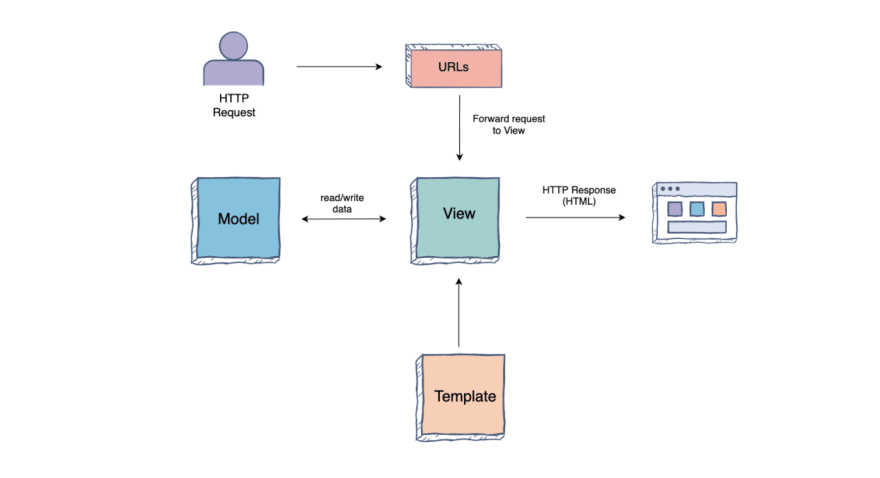 These constituent parts are put in their own distinct files named for their purpose in Django web applications. In addition, you might have a URL mapper that deals with routing to a specific view for different endpoints.

So far we have taken a look at an introduction to Django. So, how does it really differ from another popular Python solution, Flask?

Flask is a microframework, meaning it is simple but extensible. Flask is based on the concept of doing one thing and doing it well. Flask does not need any tools or extra libraries. It also does not possess any database abstraction layer.

Django, on the other hand, is a batteries included framework that provides many things out of the box. It offers less control than Flask, with the inclusion of an admin panel, an ORM (Object Relational Mapping). Django has the goal of simplifying website creation.

So, which is better? There isn't really a solution that is better or worse. It comes down to your requirements. They are both great in their own market and domains. At a high-level, Django provides the advantage of being a full stack framework. Generally, teams prefer Django over Flask for its variety.

How does Django work?

In Django, we can make projects and applications. In most instances, the terms can be interchangeable, but in Django they are not. Projects can contain several smaller applications that serve a particular function or purpose. In a library project, we can have a registration application, a login application, a catalog application, etc..

The root directory will look something like the code below when we create a run the application’s migrations. Later, we’ll go over how to actually install and run Django on your device.

The inner project_1 folder contains all the pertinent files for your project.

The application_1 folder contains all the pertinent files for your application.

When we run our server, the server configures Django’s default configuration with your add-ons that are setup in settings.py. Your ROOT_URLCONF points to the URL mapper in your project folder. The URL mapper then points to views, which contain logic to return a response to some sort of HTTP request.

The models file is where we create the schema for our table. We use SQL-like syntax to make constraints on the data that gets passed. We register the models in the admin file so that we can run migrations on the project after registration.

When learning how Django works, it’s easiest from the top down, starting at settings.py. From there, you can navigate through the project by going to the project’s URL mapper.

It’s best want to understand how the structure works is by creating a project, so let’s do it!

So, now we understand the basics of Hello World in Django. Let's take this a step further and build our first proper Django project from scratch. 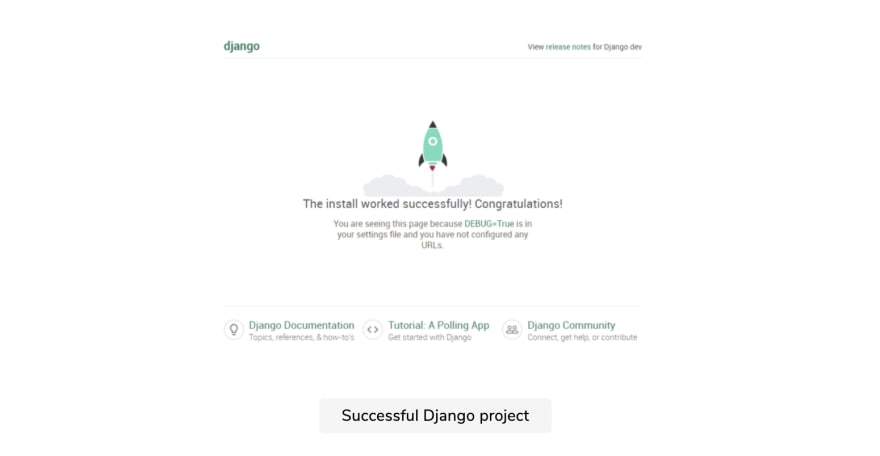 Note: You might get an error in your terminal saying you need to run migrations. Don’t worry about that at this point since we are not working with a database.

As mentioned in previous sections, projects and applications are very different in Django. An application serves one basic purpose or function. In this sample application, we’ll create a basic Hello World application for our first_project.

We’ve just scratched the surface of what Django can do. Learning the Django templates is a great next step for mastering intermediate Django. But there is still a lot to learn!

Continue your journey by learning how to:

All of these concepts and more and covered in Educative’s course Django: Python Web Development Unleashed. You'll learn beginning and intermediate concepts alongside tons of real-world projects. At the end of the course, you will have created a few Django projects and solved Django challenges that can be used in your portfolio.

Level up on in-demand tech skills - at your own speed. Text-based courses with embedded coding environments help you learn without the fluff.
Code of Conduct • Report abuse

How to get historical market data from Interactive Brokers using Python

🤩 Best VS Codes Extensions 🛠 Every Developers Should Use in 2020

What terminal do you use?