This article was originally published at: https://www.blog.duomly.com/what-is-idea-validation/

Are you wondering if your idea for an app is worth pursuing?

You are not alone.

Many people have great ideas that they want to turn into reality. Still, they are unsure if the idea will be profitable. After all, it takes a lot of time and effort to build an app.

If you don't have enough traffic or sales to make back what you put in, then your idea was a waste of time!

This article will focus on idea validation with landing page presale with Facebook ads. We will do calculations if that idea is profitable or not.

If you prefer video, here is the youtube version. 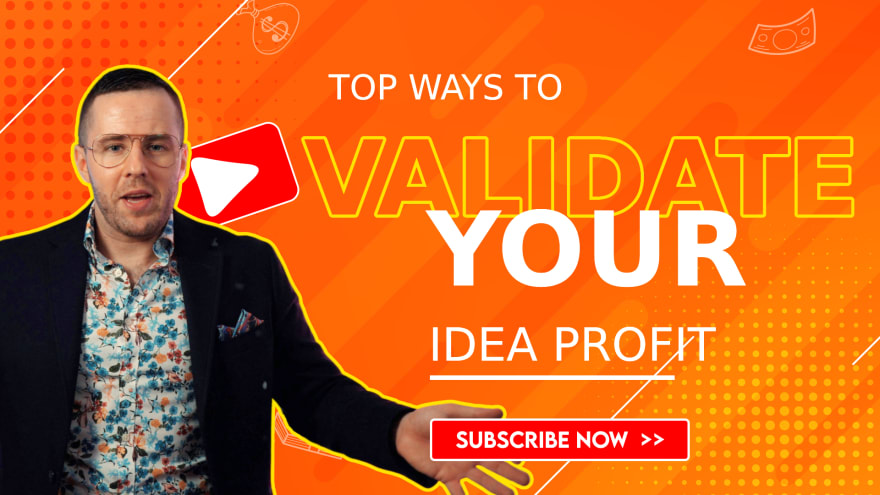 1. What idea validation is

Many people have great ideas that they want to turn into reality. Still, they are unsure if an idea will be profitable. After all, it takes a lot of time and effort to build an app, so you should make sure your idea has potential before starting.

If you don't have enough traffic or sales to make back what you put in, then your idea was a waste of time! As an entrepreneur, one of the most important things you must do, is understand your idea's potential before spending time and money on it.

Idea validation is a way to gauge the idea's potential by seeing how people respond to it. To do idea validation, you need to have a group of people willing to give their idea feedback and provide a presale for the idea before it is developed.

The idea validation process starts when you start splitting up your idea into tasks or features developed to create your app. There are no deadlines set for idea validation, so you are free to take as much time as needed for this step.

2. Why idea validation is important

Suppose your idea gets good feedback from potential application users in its early stages. In that case, there are two main benefits: You will gain valuable information about what people want and how they would like to use an application based on their needs. Your presale page for idea validation will be more credible because of user interest, which means that many visitors might buy into the project when you launch presales. It saves a lot of time and money. When we develop something without knowing if anyone really needs it, we waste time and money.

On the other hand, idea validation is not always necessary because sometimes you can make an app with high demand, like Angry Birds or Instagram. However, idea validation might help avoid risks of failure. Anyway if your app gets positive feedback from your potential users even without generating ideas, then go ahead with development.

3. How idea validation helps you find the best idea to pursue

When developing an app idea, there are many things you need to consider before starting out, such as what features should go into the product. When creating an app business model concept, you also have to make sure these features are prioritized according to the value they bring in terms of revenue generation.

For example, suppose one feature brings high traffic but a low-profit margin. In that case, another option might be to remove that feature.

This way, you can focus your efforts on creating an app idea with a higher chance of success.

4. What is a presale

This process gives people an opportunity to pay upfront before the app has even been built. Once again, there are no deadlines set, so you can take as much time as needed for this step too.

The presale of the idea is very important because it shows that people are actually interested in your idea and want to buy it or contribute their money. That means you can definitely make a profit on this idea.

To do idea validation, create a landing sales page where people can purchase your application and become early users.

The idea behind this is that people willing to buy now will be more likely to become active users once your app is released.

A good idea validation strategy makes sure you have a large pool of potential users ready before launching. So make sure you create an excellent landing page for app validation!
The sales page needs to have all of this information, so people will know what they're getting into before buying in:

The landing page needs all the details. So potential users have a good idea about what they're getting themselves into and can make an informed decision based on whether or not this is something they want right now. If there are additional features associated with buying into the idea early, include what those might be. If not, leave out a mention of them completely. This way, you know exactly how much interest there is.

This idea validation method is a win-win for everyone! The app owner gets early users and feedback. In contrast, the potential user can access an application that hasn't been released yet at a discounted price.

6. How to get huge traffic to the sales page

We'll use a Facebook ads campaign optimized to purchase conversion to drive traffic to the sales page.
Create the idea validation campaign through Facebook ads or other channels like Google Adwords.
Google AdWords can handle only hot audiences, and Facebook is better for cold. Still, the hot audiences can be present there as well.

Don't forget about a simple retargeting campaign via social media sites, etc. In this way, it will be easier for people who had visited your website or blog before but didn't buy anything because they were just browsing around without knowing what they wanted from their mobile app idea. But now, with all of these marketing strategies in place, it would make them go ahead and purchase after seeing ad banner images on their favorite websites.

If users still don't buy even though they saw the advertisement everywhere online, then at least we know our idea is not profitable enough yet.
You should also plan how much presale funds you will need to develop all the mobile app features. This is usually about half of the development budget.

Once you have idea validation sales, try to get feedback from them regarding features they would like an application to include and prioritize this idea according to their popularity. This is a great way to validate your idea and make sure your application will be tailored to your future users.

7. What budget is needed for app idea validation?

The idea validation budget is really variable. It depends on many factors, such as the idea itself, whether you will use different channels for idea validation or just one of them, etc. It's very easy to calculate how much money will be required for an idea validation campaign only (not including other costs).

Therefore your total budget would be 1500$.

This number might seem huge but believe me, once you start testing this method with various apps ideas. You'll see that even these tiny budgets can bring you a big idea validation success.

8. Calculating if your idea will be profitable or not

Now let's calculate if we could expect any profits from the idea after business expenses and taxes.
In the first scenario, we will calculate app profitability with $25 of membership cost and 3% of sales page conversion rate (expensive ads and low sale price scenario):

As we can see in this case application looks not profitable, but it doesn't have to be like that.
It still looks like our sales pages convert at a 3% rate, which is not bad, which means our application can have potential.

For example, when we optimize costs of campaign or user acquisition, our application can still be a very profitable idea.

As you can see in the second scenario, the app is very profitable. Imagine how profitable it could be if you get viral or start getting free traffic from SEO or social media platforms!
We need at least 30-40% profit after ads costs for this idea to be profitable.

If it is not, you should consider scrapping this idea and going back to the drawing board.
This idea might not be the right one for you, but this is why idea validation exists.

Now, we know what numbers are required to make our idea profitable. We should look at how much money should be invested into app idea development in general before launching.

After idea validation and presale have been completed successfully, the next stage is building the application itself. However, suppose either of these stages failed or was abandoned by developers. In that case, the idea isn't worth pursuing because potential investors won't invest in something based on just an idea without proof it could bring them profit.

If you've read this article, I hope it has given you some idea validation tips to help make your idea more attractive to the market.

The idea is not worth pursuing without proof that it could profit investors. So if idea validation fails or is abandoned by developers, don't be discouraged because there are other options available.

If idea validation succeeds and presale also goes well, then congratulations! You will have a product on its way into production, which can now start generating revenue for you.
If idea validation doesn't go as planned but presale does?

Well, at least you know what's wrong with your idea before wasting any time developing an app no one wants.

Thanks for reading,
Radek from Duomly

How To Configure Nginx as a Load Balancer

React project one must do!

Once suspended, duomly will not be able to comment or publish posts until their suspension is removed.

Once unsuspended, duomly will be able to comment and publish posts again.

Once unpublished, all posts by duomly will become hidden and only accessible to themselves.

If duomly is not suspended, they can still re-publish their posts from their dashboard.

Once unpublished, this post will become invisible to the public and only accessible to Duomly.

Thanks for keeping DEV Community safe. Here is what you can do to flag duomly:

Unflagging duomly will restore default visibility to their posts.