Docker is a technology designed to make it easier to create, deploy, and run applications by using containers. Docker is an open platform, once we build a docker container, we can run it anywhere, say it windows, Linux, mac whether on a laptop, data center, or in the cloud. It follows the build once, run anywhere approach.

I will not be showing you the steps to install docker here.
You can refer this.

Docker works on a wide variety of operating systems, this includes:

The installation of Docker is pretty straight forward in each one of them.
https://docs.docker.com/get-docker/

Docker Image is a file that contains all the necessary dependency and configurations which are required to run an application.

Docker Containers is basically a running instance of an image.

When you create a Docker container, it is assigned a universally unique identifier (UUID).

These can help identify the docker container among others.
To help humans, Docker also allows us to supply container names.
By default, if we do not specify the name, docker supplies a randomly-generated name from two words, joined by an underscore
By adding --name=meaningful_name argument during the docker run command, we can specify our own name to the containers

Here is a Snapshot for your reference, Do click on image to see it properly. 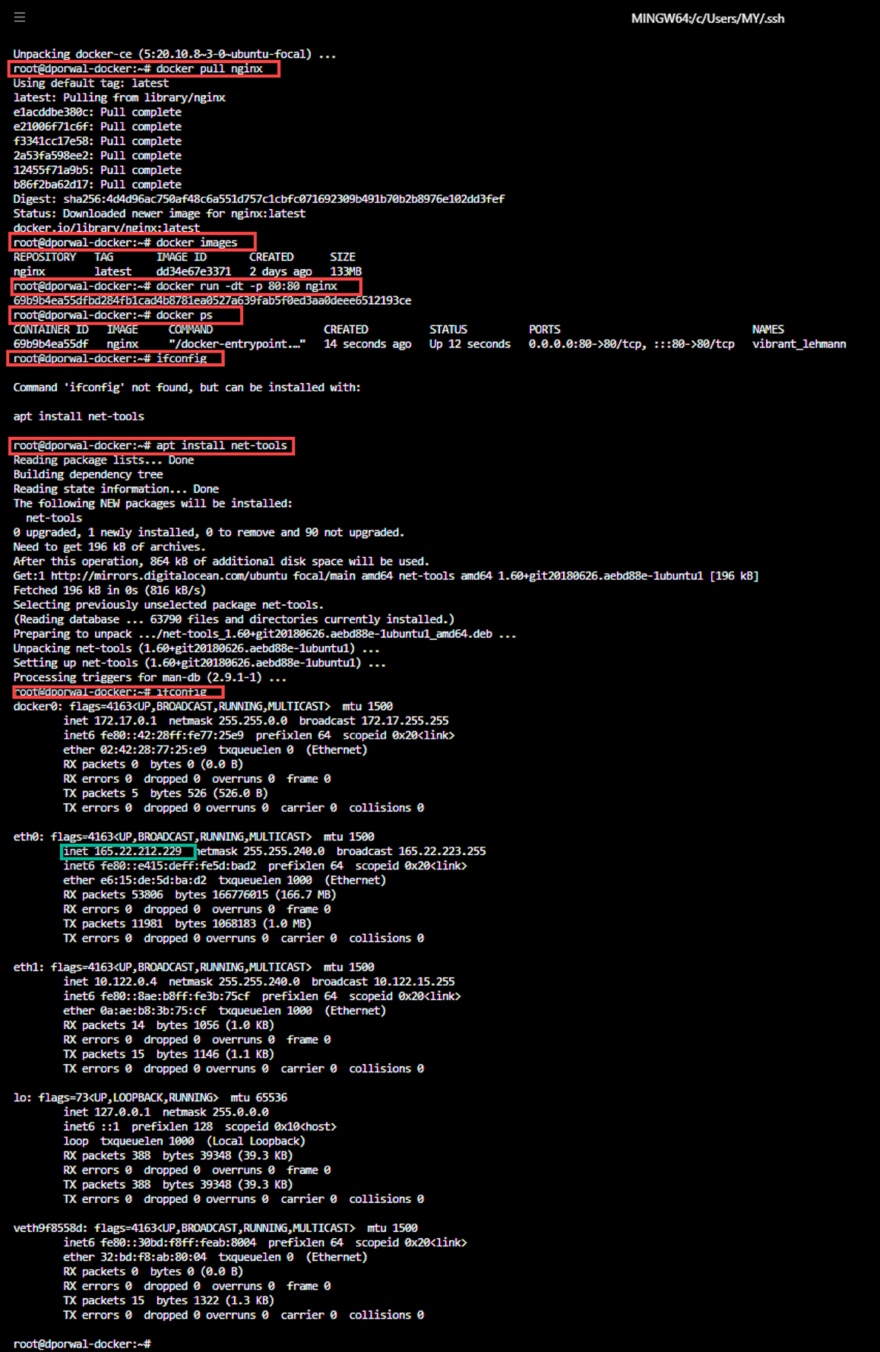 Here 165.22.212.229 is droplet Public IP and 80 is the port on which image has been mapped(docker run -dt -p 80:80 nginx)
By default Docker containers can make connections to the outside world, but the outside world cannot connect to containers.
If we want containers to accept incoming connections from the world, you will have to bind it to a host port.

When we start a docker container, we need to decide if we want to run in a default foreground mode or the detached mode.
You may want to use this if you want a container to run but do not want to view and follow all its output. 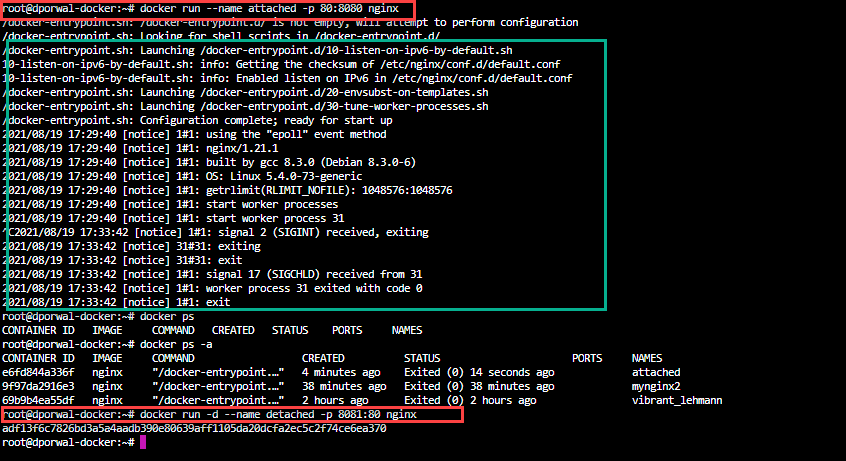 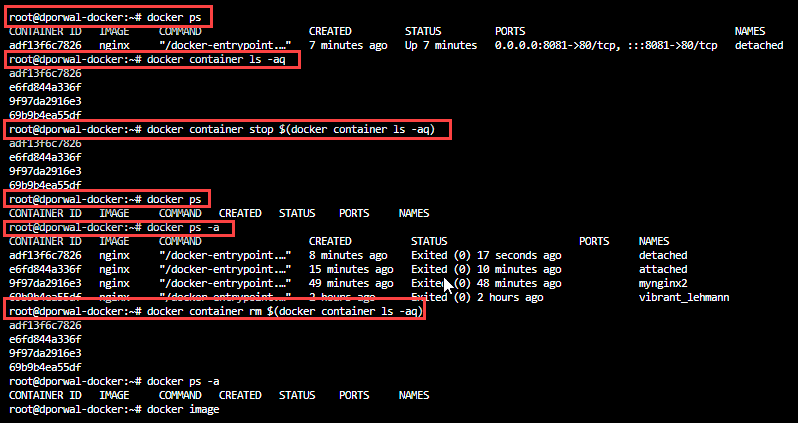 While I was removing Image I found that images were running. SO, wasn't able to remove.
Therefore, you can't remove the image until you stop.

The cli commands were then refactored to have the form docker COMMAND SUBCOMMAND, wherein this case the COMMAND is container and the SUBCOMMAND is run

Both of these approaches will work perfectly.

The docker container exec command runs a new command in a running container.

The command started using docker exec only runs while the container’s primary process (PID 1) is running, and it is not restarted if the container is restarted.

Here is the snapshot of above commands. 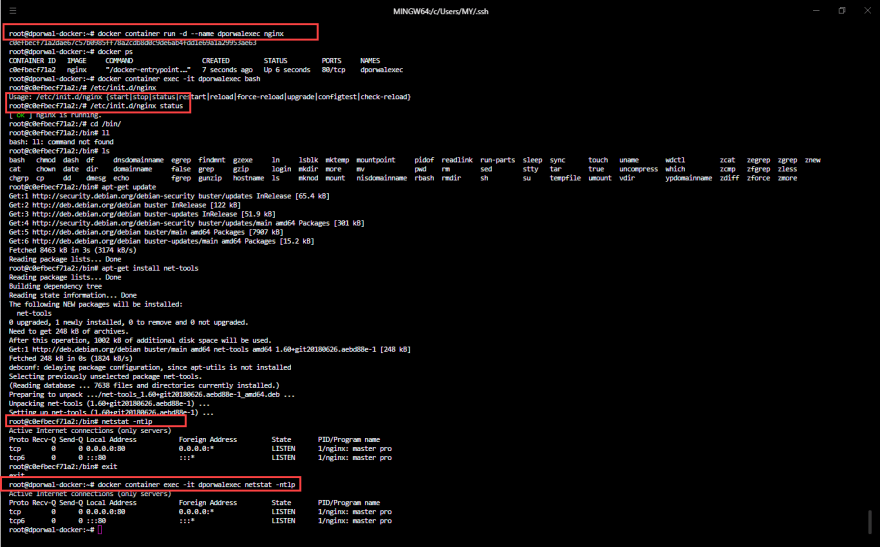 Importance of the IT flag

-it
Every process that we create in the linux environment , has three open files descriptions, stdin, stdout, stderr

-i --> interactive, keeps stdin open even if not attached

Whenever we run a container, a default command executes which typically runs as PID 1.

We can override the default container command by manually specifying the command.

In the above command, the sleep 500 will run as a PID 1 process overriding any default command that would be present in the nginx container. 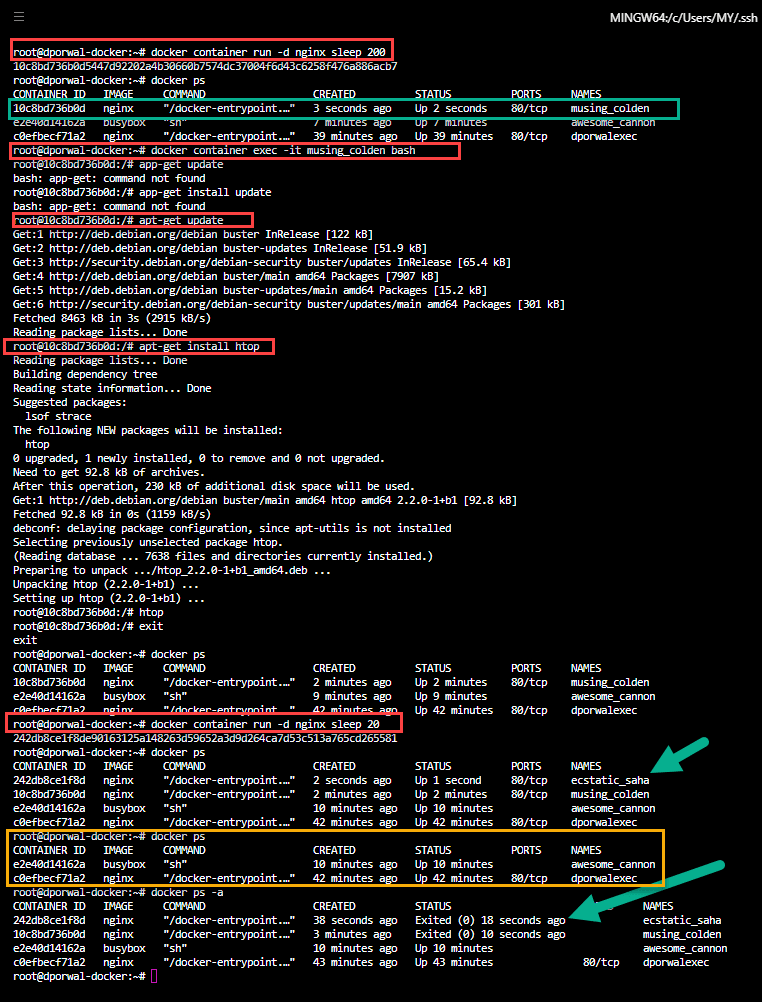 By default, Docker containers will not start when they exit or when docker daemon is restarted.

Docker provides restart policies to control whether your containers start automatically when they exit, or when Docker restarts. 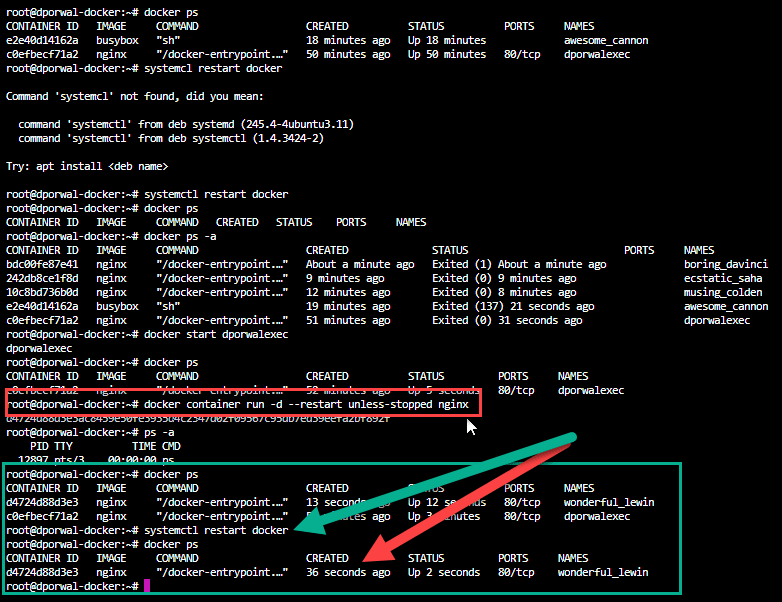 The docker system df command displays information regarding the amount of disk space used by the docker daemon.

In the below Snapshot I'm creating 500MB file using command.
I'm not sure about the below mechanism, Do let me know in discussion section if you know anything about this, how it works. 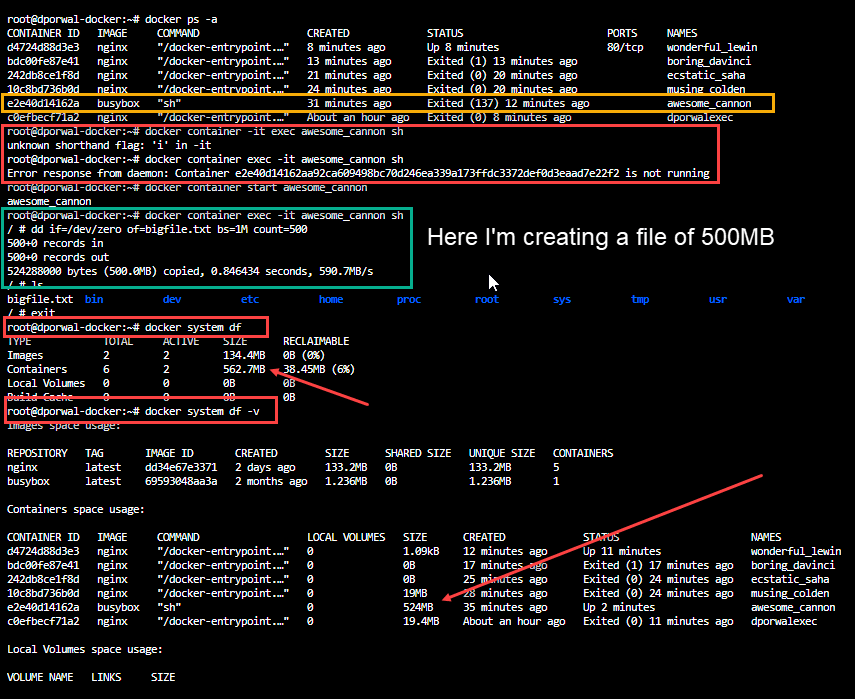 To remove one image at a time, we will use below command.

To remove all the docker images at once, we will use first to list all the images and then run all the commands

Next: Image Creation, Management, and Registry(Part 1)

Installing Docker, and Docker-Compose, in WSL2/Ubuntu on Windows