We're excited to announce our $20m Series A round led by CRV with participation from existing investors including Google Ventures, Sequoia Capital, and Y Combinator. 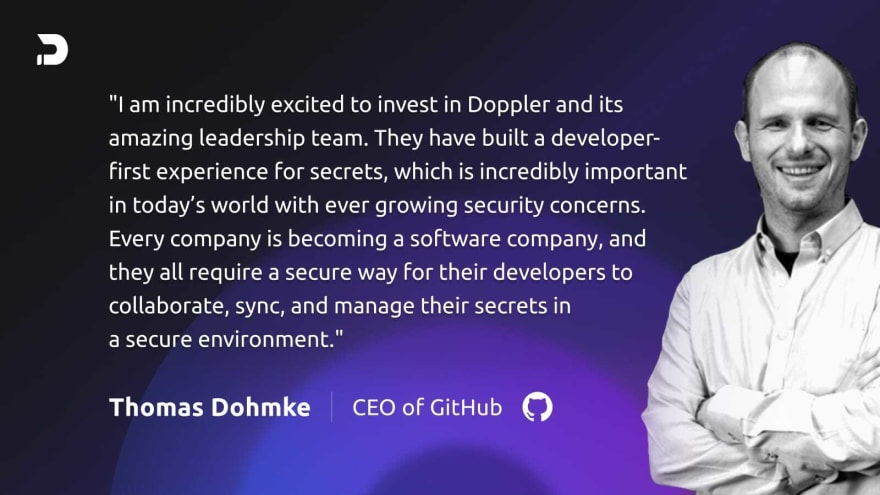 By building the first SecretOps Platform, developers and security teams can leave behind the problems caused by .env files, unmanageable secrets sprawl across multiple clouds, and the lack of innovation from traditional secret managers.

The ability to securely store, transmit, and audit secrets has never been more critical as one minor error can lead to catastrophic results.

In a world where putting a single space in the wrong place can literally take down a company’s entire website, Doppler makes it easy to prevent leaks and outages with their developer-focused approach.

A SecretOps Platform is the single source of truth for developers and their teams to manage, store, and automatically sync secrets to every major hosting platform, secrets manager, and infrastructure management tooling such as Kubernetes and Terraform.

The reality is that the legacy way of storing secrets in siloed secrets managers and .env files doesn’t make sense anymore.

With Doppler, we can put those days behind us. Just like when GitHub first pioneered the notion of a pull request,—once you see the benefits, there's no turning back.

Fuelling Doppler's growth are customers such as Puma, Hopin, ezCater, Toast, Gather, My Muscle Chef, OnDeck, and many others. More than 15,000 teams trust Doppler to manage their secrets with over 1.5 billion secrets synced every month.

Traditional secrets managers were never built to support a multi-cloud deployment strategy or provide developers with the management features they need as part of the software development lifecycle and deployment process.

But we don’t just need slightly better secrets managers. We need a SecretOps Platform. A platform that satisfies the requirements of both Developers and Security Engineers. Development teams and DevSecOps.

Doppler combines all of the key elements DevOps and Security teams need to control who can see and modify secrets at scale as well as an audit trail, versioning, enterprise grade encryption, secrets rotation and dynamic secrets.

Doppler also seamlessly integrates and syncs secrets to a growing list of infrastructure tools such as Kubernetes and Terraform, platforms such as GitHub Actions and Vercel, and cloud secret managers such as AWS Secrets Manager and Azure Key Vault.

Doppler's Series A is further confirmation that building the first SecretOps Platform is essential to making secrets automation a first-class citizen in the infrastructure management landscape.

CRV is a venture capital firm that invests in early-stage startups. Since 1970, the firm has invested in more than 500 startups at their most crucial stages, including Airtable, DoorDash, and Iterable. Founders need more than capital to build a great company. It takes a partner who understands the entrepreneurial journey and knows what it takes to win. From founding to IPO and beyond, CRV is there every step of the way. Founders rely on CRV to be trusted, long-term, committed partners, which has helped make CRV into one of the longest-running venture capital firms in the world. Learn more about CRV and the companies shaping the future at https://www.crv.com.

All about Screen 🖥 command

Once suspended, doppler will not be able to comment or publish posts until their suspension is removed.

Once unsuspended, doppler will be able to comment and publish posts again.

Once unpublished, all posts by doppler will become hidden and only accessible to themselves.

If doppler is not suspended, they can still re-publish their posts from their dashboard.