Even with environment variable storage offered by modern hosting platforms and secrets managers provided by every cloud, developers' machines are still littered with secrets in unencrypted text files because local development was left out of the picture.

But we can remedy this situation using dynamic secrets injection and ephemeral secrets files, and in this post, we'll be using the Doppler CLI to demonstrate how this is possible.

But before diving in, we need to solve the problem of secure and encrypted storage for secrets used in local development. 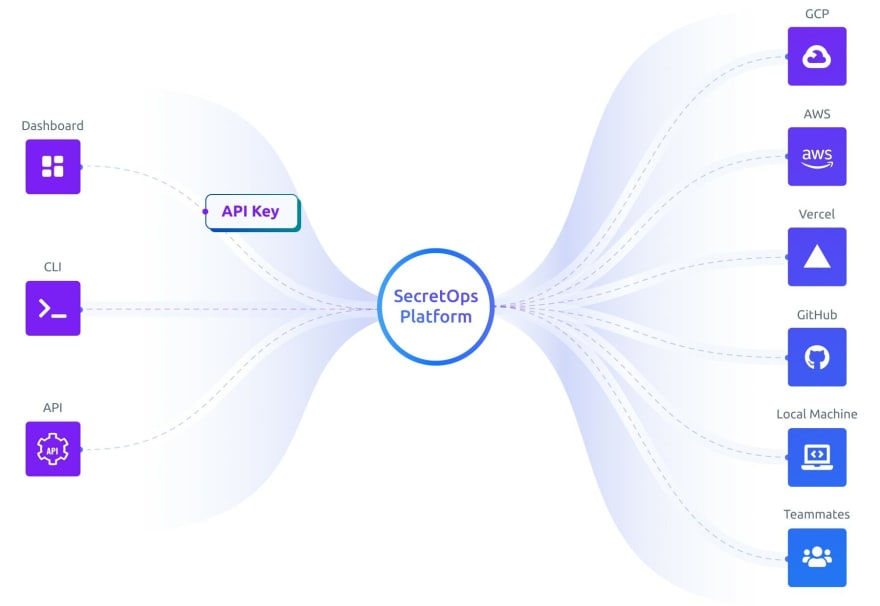 Development scoped secrets simply don't exist in traditional solutions because secrets are siloed within the confines of their respective cloud or platform.

While multi-cloud capable secret managers such as HashiCorp Vault showed great promise, the prohibitively steep learning curve and unavoidable complexity involved with fetching secrets create a significant barrier to adoption as teams are left with no incentive to switch.

A SecretOps Platform builds upon the idea of centralized secrets storage but differs from existing solutions by providing a CLI and integrations for syncing secrets to any environment, machine, platform, or cloud secrets manager. It's the best of both worlds, providing a single source of truth for management while development teams choose the best secrets access method on a per-application basis.

How does this help local development? In a SecretOps world, each application has a Development environment specifically for use on developers' machines, solving the storage problem.

Using the Doppler CLI to demonstrate, let's dive in to explore the mechanics of dynamic secrets injection and ephemeral secrets files.

The Doppler CLI uses the same secrets injection model as platforms such as Heroku and Cloudflare Workers by injecting the secrets as environment variables into the application process.

You can use a command:

Create a long-running background process in a virtual machine:

Use the Doppler CLI inside a Docker container:

It's also possible to pipe secrets in .env file format to the Docker CLI, where it reads the output as a file using process substitution:

The same technique applies to creating a Kubernetes secret:

But if a secrets file is what your application needs, we've got you covered.

The Doppler CLI enables the mounting of ephemeral secrets files in .env, JSON, or a custom file format using a secrets template that is automatically cleaned up when the application process exits. Imagine how happy your Security team will be when they learn that secrets will never live on any developer's machines again!

To mount an .env file:

To mount a JSON file:

You can specify the format using --mount-format if the file extension doesn't map to a known format:

Or you can use a custom template, e.g. configure Firebase functions emulator using a .runtimeconfig.json file:

You can even make things more secure by restricting the number of read requests using the --mount-max-reads option, e.g. caching PHP configuration which only requires the .env file to be read once:

If you're wondering what happens to the mounted file if the Doppler process is force killed, its file contents will appear to vanish instantly. The mounted file isn't a regular file at all, but a Unix named-pipe. If you've ever heard the phrase "everything is a file in Unix", you now have a better understanding of what that means.

Named pipes are designed for inter-process communication while still using the file system as the access point. In this case, it's a client-server model, where your application is effectively sending a read request to the Doppler CLI. If the Doppler CLI is force killed, the .env file (named pipe) will still exist, but because no process is attached to it, requests to read the file will simply hang. Just delete the file from your terminal, and you're good to go.

Thanks to SecretOps, we now have the workflows required to prevent secrets from ever living on a developer's machine again. All you need is dynamic secrets injection, ephemeral secrets files, and a single source of truth to pull it all together.

If you're interested in trying Doppler, it's free for up to 5 accounts on the Developer subscription with no credit card when signing up.

You can also start a free seven-day trial on our Team plan to unlock features such as user access controls, SAML SSO, and Slack activity notifications.

For an Enterprise trial, get in touch.

Relax, JS `this` is damn easy.

The Best Github Repos for Self-Taught

Once suspended, doppler will not be able to comment or publish posts until their suspension is removed.

Once unsuspended, doppler will be able to comment and publish posts again.

Once unpublished, all posts by doppler will become hidden and only accessible to themselves.

If doppler is not suspended, they can still re-publish their posts from their dashboard.

Once unpublished, this post will become invisible to the public and only accessible to Ryan Blunden.

Thanks for keeping DEV Community safe. Here is what you can do to flag doppler:

Unflagging doppler will restore default visibility to their posts.