Merge Sort is one of the most popular and efficient sorting algorithms.

In this article we will discuss:

This article was originally published on DoableDanny.com.

What is the Merge Sort Algorithm?

Merge Sort is, you guessed it, a sorting algorithm that can be used to order the items of an array from smallest to largest. It takes in an array, sorts it, then spits it out:

Merge Sort is an out-of-place, stable, and comparison-type sorting algorithm

Out-of-place means that the algorithm requires additional data structures when sorting. This is opposite to in-place sorting algorithms, where the input is simply overwritten and no extra data structures are required.

And finally, a comparison sort is a sorting algorithm that only reads the list of elements through a single abstract comparison operation (usually a “less than” or “equal to”) that determines which of the two elements should occur first in the final sorted output array.

Check out my In-place, stable, comparison article if you don’t quite understand the above, or don’t know why it’s important to know these properties of an algorithm.

Merge Sort is a combination of two things: merging and sorting. It exploits the fact that arrays of 0 or 1 item are always sorted e.g.:

Merge Sort works by decomposing an array into smaller arrays of 0 or 1 items, then building up a newly sorted array.

First, we divide the array up until we get arrays of 0 or 1 item. This is the “base case” – we know these arrays are sorted because they are 1 or 0 long.

Next, we merge these smaller arrays until we get to the final sorted one: 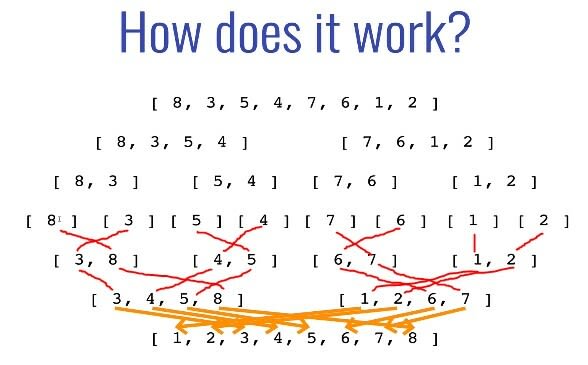 If that doesn’t quite make sense, check out these folk dancers demonstrating merge sort then re-read the above - things will then become clear!

Also, check out Visualgo for beautiful visualisations of sorting algorithms. It’s a great resource to have bookmarked when studying algorithms.

Now you have an idea for how Merge Sort works, let’s put it into code.

First, we need to understand how to merge two sorted arrays.

Given two arrays which are sorted, this helper function should create a new array which is also sorted, and consists of all the elements in the two input arrays.

Here is our merge helper function. Remember, it accepts two SORTED arrays and merges them into one, larger sorted array.

Our merge algorithm runs at O(n + m) where n and m are the lengths of the first and second arrays respectively. This is because we iterate over each item in each array once. This just boils down to a Big O(n) => linear time complexity.

Next we can write a mergeSort function that uses recursion to halve the arrays with the slice() method. The base case is when the arrays have a length of 1 or 0.

Unlike some other sorting algorithms, such as Bubble Sort and Insertion Sort, Merge Sort doesn’t care whether the data is almost sorted or not. It will split the array up and merge them back together no matter if the input array is already sorted (best), “random” (average), or in-reverse (worst). For a given length input, the number of operations will always be the same – no matter what order it’s in. 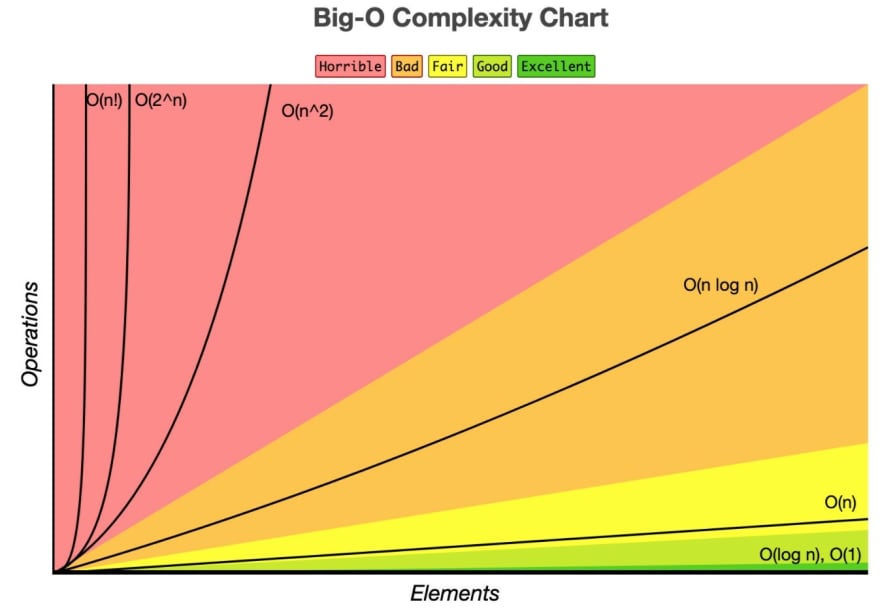 But where does this log(n) come from? If the length of the input array is 8, then the array will be divided in half three times:

Each arrow represents a division by 2. We start with one array of 8 items, then two arrays of 4 items, then four arrays of 2 items, and finally eight arrays of 1 item.

This is logarithmic time. Every time we double the size of the input, the number of operations (divisions) increases by just 1.

Now I’ve explained where the log(n) comes from, what about the n? The n comes from the merge helper function. It has to make roughly eight comparisons for an array of 8 items; hence linear time.

So, in total, the worst-case time complexity of Merge Sort is O(n log(n)). The best worst-case we can get from a sorting algorithm.

Merge Sort is one of the most efficient sorting algorithms for sorting large arrays.

However, if you know that the input array will be small, or sorted/almost sorted, you might be better off using an algorithm like insertion sort which is of O(n) at best case (O(n2) worst case).

Merge Sort is very fast for a sorting algorithm, but as with most algorithms, the gains in speed come with the cost of taking up more space in memory. The larger the array, the more arrays that have to be stored in memory (from dividing them up). But in most cases, this isn’t a problem, usually we care more about time than space.

The space complexity of Merge Sort is O(n).

If you Want to Master Algorithms...

If you want to further your knowledge of algorithms and data structures, check out: JavaScript Algorithms and Data Structures Masterclass by Colt Steele. It’s the best Udemy course I’ve ever taken 👌.

If you enjoyed this article, you can say thanks by subscribing to my [YouTube channel (https://www.youtube.com/channel/UC0URylW_U4i26wN231yRqvA) or by signing up to my blog to be notified of new posts 🙏

Also, feel free to connect with me on Twitter!

Why NodeJS in Front Ends?

Once suspended, doabledanny will not be able to comment or publish posts until their suspension is removed.

Once unsuspended, doabledanny will be able to comment and publish posts again.

Once unpublished, all posts by doabledanny will become hidden and only accessible to themselves.

If doabledanny is not suspended, they can still re-publish their posts from their dashboard.

Once unpublished, this post will become invisible to the public and only accessible to Danny Adams.

Thanks for keeping DEV Community safe. Here is what you can do to flag doabledanny:

Unflagging doabledanny will restore default visibility to their posts.