Hola! Lazy dev here, and today we are going to discuss computer eyes 👁👁 that help us to test how our products look like.

The visual regression tools that we are using every day are extremely slow. That is the fact. At least because the task to compare 2 images is hard. And I tried to fix this 👀.

But first of all, let's take a look at how visual regression tools work under the hood and what they are actually doing.

Image comparison itself is pretty hard. We can not just compare 2 image buffers using "===" and even we can not take all the pixels from the image and compare them one by one. Why? Because human eyes can not see the difference between all the colors. For example, how do you think – do these colors are the same or not? 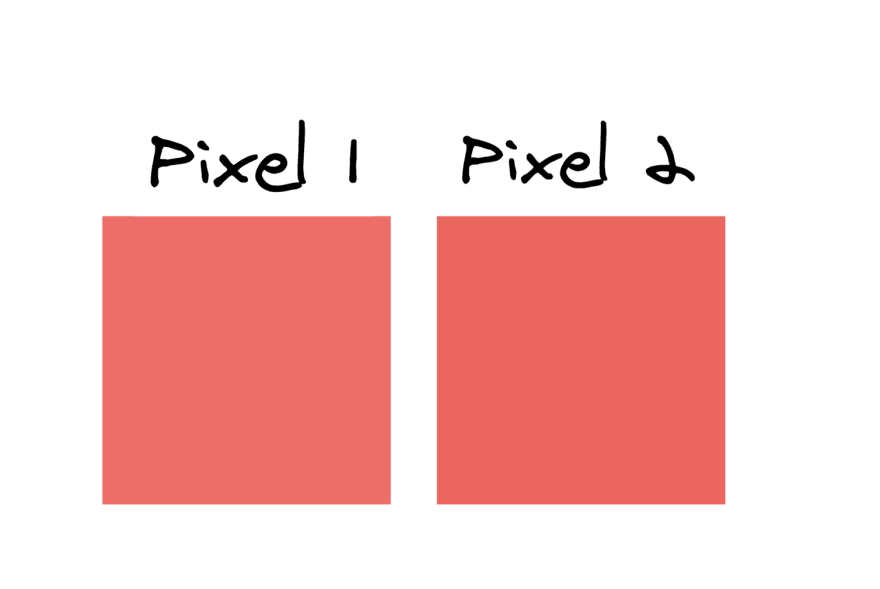 This is a hard task for computers. So the algorithm is:

But the result is extremely helpful when you are testing the user interface: 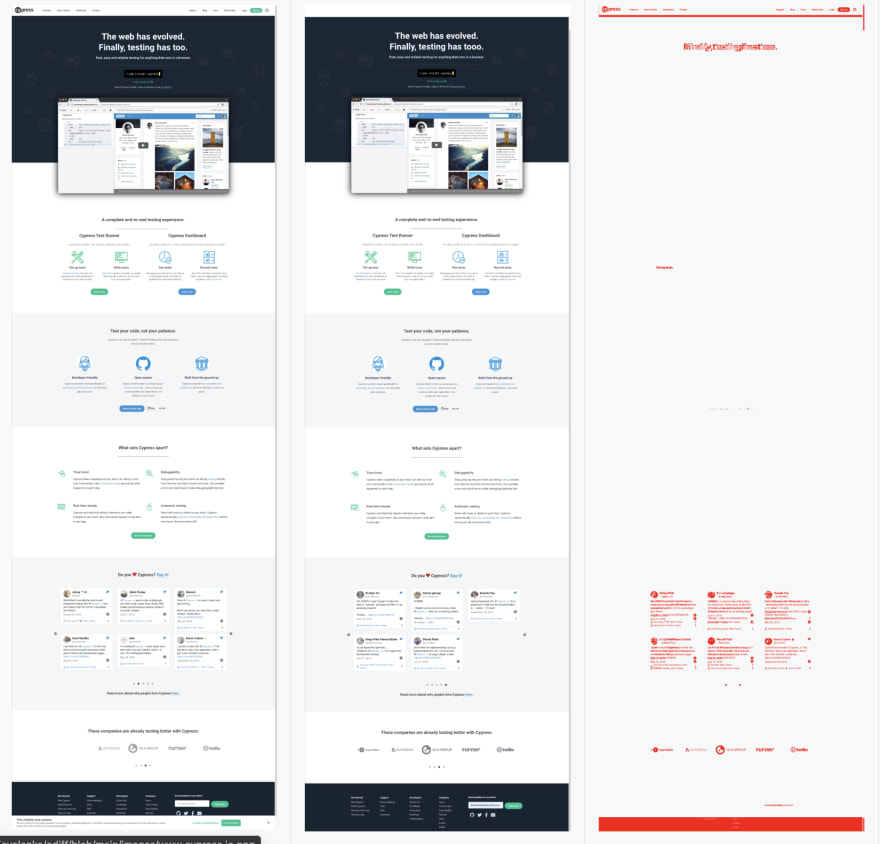 But unfortunately, tools that we are commonly using to compare screenshots are extremely slow. And they are slow not because they had a bad code inside. The main problem is that they are often written in the wrong language* or doing some useless job under the hood.

For example, the most popular image comparison tool in the javascript community – pixelmatch is really slow in Node.js environment (but blazing fast in the browser otherwise).

Using pixelmatch to comparing 2 screenshots of https://cypress.io home page will take around 7-8 seconds. 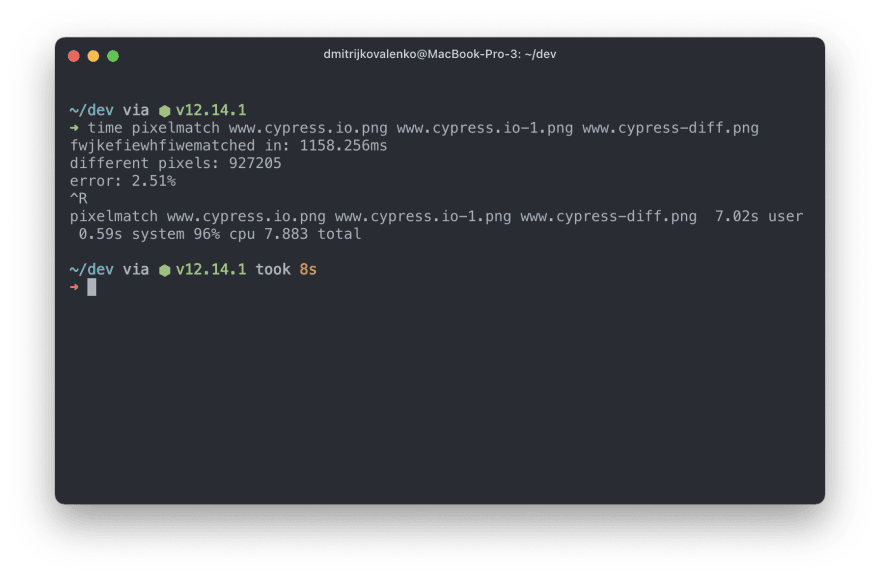 Impact on your CI

This really affects our CI time. Let's calculate the CI time for visual regression if we are running 25000 screenshot tests per month. And this number is not something overwhelming. It is a very basic plan of https://percy.io, which is usually not enough for huge projects.

So, if we are running 25000 visual tests and each screenshot test running for 7 seconds we are spending 48,6 hours on CI!

That is a lot! This can take even more time than all the other UI tests and that's why performance for this sort of task really matters.

Cause if we can save at least 3 seconds per each snapshot we will save 20 hours per month.

That was a pain point for me, so I decided to fix this – and wrote that fastest in the world image comparison tool.

And I am happy to introduce you odiff! 👀🥳🎉 It was designed to handle the "huge" images, be fast, memory-efficient, and save your CI time. 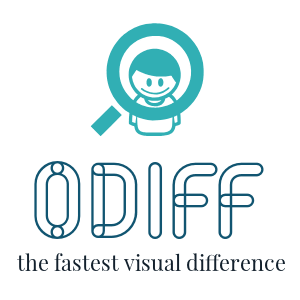 This tool is running the same comparison 2 times faster than analogs! Yes, it can save you those 3 seconds per snapshot :)

Here are some benchmarks: 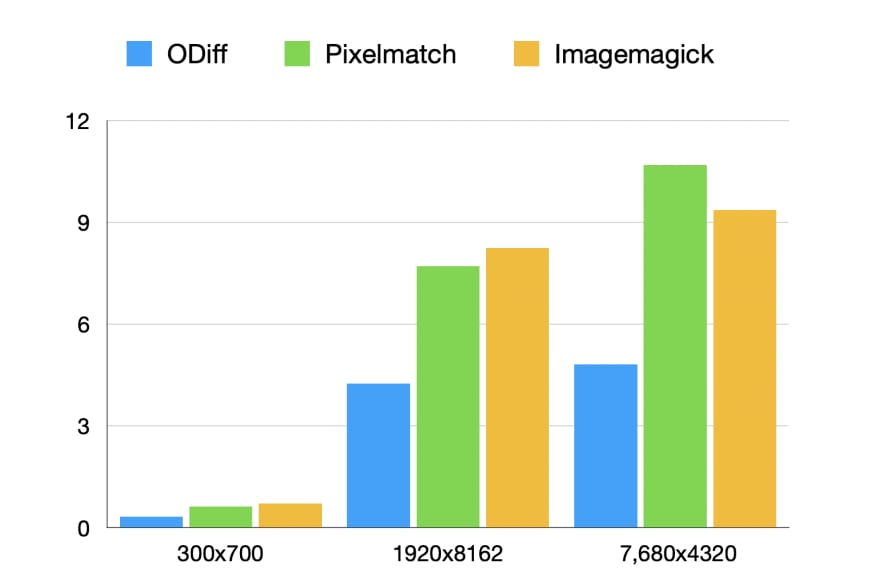 Also, here are the results of comparing the same cypress.io home page screenshot:

Why it is so fast? The answer is simple:

Try it out right now! Give us your feedback, and do not forget about ⭐️ the project if you are interested!

The fastest pixel-by-pixel image visual difference tool in the world.

The fastest in the world pixel-by-pixel image difference tool.

ODiff is a blazing fast native image comparison tool. Check benchmarks for the results, but it compares the visual difference between 2 images in milliseconds. It was originally designed to handle the "big" images. Thanks to Ocaml and its speedy and predictable compiler we can significantly speed up your CI pipeline.

Coming in the nearest future:

Run the simple comparison. Image paths can be one of supported formats, diff output can only…

Thank you for your time! Optimize your CI pipeline and in order to follow the tradition – no pixels were harmed in the making of this article 🙈

Once suspended, dmtrkovalenko will not be able to comment or publish posts until their suspension is removed.

Once unsuspended, dmtrkovalenko will be able to comment and publish posts again.

Once unpublished, all posts by dmtrkovalenko will become hidden and only accessible to themselves.

If dmtrkovalenko is not suspended, they can still re-publish their posts from their dashboard.

Once unpublished, this post will become invisible to the public and only accessible to Dmitriy Kovalenko.

Thanks for keeping DEV Community safe. Here is what you can do to flag dmtrkovalenko:

Unflagging dmtrkovalenko will restore default visibility to their posts.