Wondering about how to use the awesome react dev tools while testing Cypress.io? Let's start.

Together with the v16 react team provided a completely new devtools package. You probably ❤️ love it :)

Tip: you can also install this package globally in order to run with different projects. It is ok because we will use this only for development.

2) Then add this as the very first <script> tag in the <head> of your index.html (or _document.js for next.js) when developing. This script actually connects react-devtools backend to the application.

Alternatively, you can import this using javascript

⚠️ Important that this import comes before any other imports in your app (especially before react-dom). Make sure to remove the import before deploying to production, as it carries a large DevTools client with it.

If you use Webpack and have control over its configuration, you could alternatively add react-devtools as the first item in the entry array of the development-only configuration, and then you wouldn’t need to deal either with <script> tags or import statements.

(Yes, you need 3 console tabs). Running react-devtools will open an electron application which will wait for the react app connection 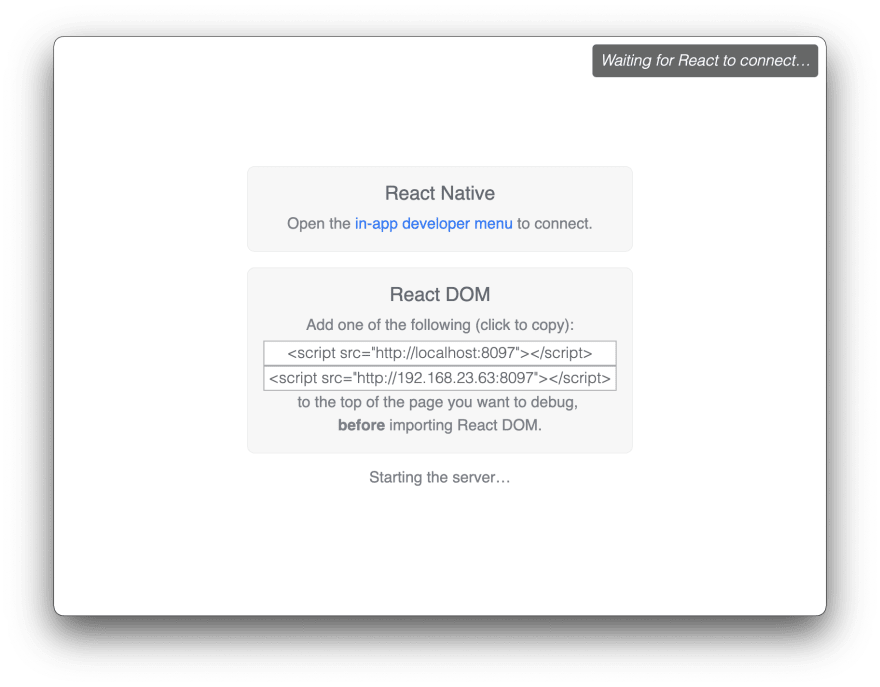 And now open the cypress app, run any spec, and observe that react-devtools connected! 👀🌟

Fully working react devtools running over your tests in 2 minutes! 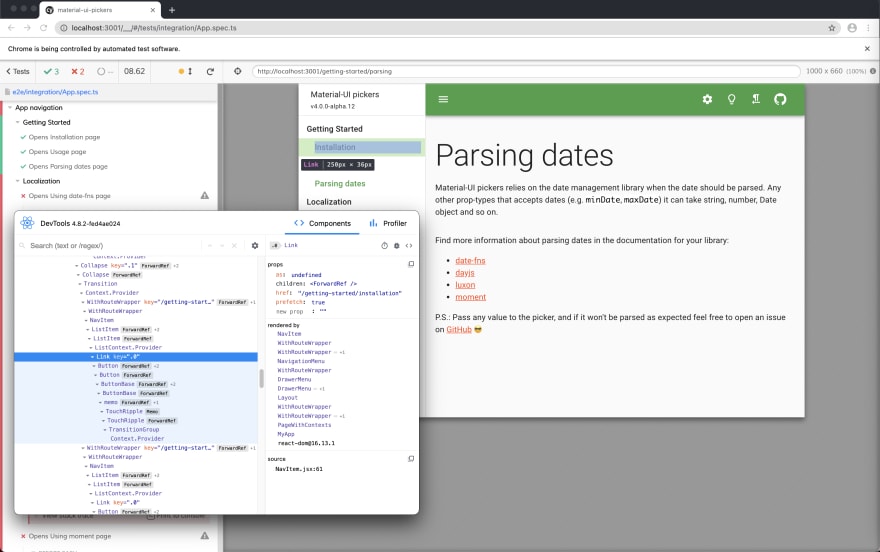 The biggest limitation of react-devtools and cypress is that they won't work with cypress' time-traveling snapshots. This happens because separate steps of time travel are rendered as dom snapshots and are not the real react applications.

In order to debug a specific test step – stop the cypress execution when you need to debug:

There is another (probably more complex) way to load devtools using chrome --load-extension=${extensionFolder}. This way is described in the blog post by Gleb Bahmutov https://www.cypress.io/blog/2020/01/07/how-to-load-the-react-devtools-extension-in-cypress/

Devtools works like a charm together with cypress tests. Have fun 🔥! Just don't get lost in open electron windows 😉.

P.S. No devtools were harmed in the making of this article

Once suspended, dmtrkovalenko will not be able to comment or publish posts until their suspension is removed.

Once unsuspended, dmtrkovalenko will be able to comment and publish posts again.

Once unpublished, all posts by dmtrkovalenko will become hidden and only accessible to themselves.

If dmtrkovalenko is not suspended, they can still re-publish their posts from their dashboard.

Once unpublished, this post will become invisible to the public and only accessible to Dmitriy Kovalenko.

Thanks for keeping DEV Community 👩‍💻👨‍💻 safe. Here is what you can do to flag dmtrkovalenko:

Unflagging dmtrkovalenko will restore default visibility to their posts.