I know what you're about to say. I, too, have read dozens of posts on JavaScript closures. But closures haven't really clicked for me until I read the MDN page three times then attempted to explain the concept to my mentor, @tryggvigy . Everything I learned from our conversation is written below.

What is a closure

One of the reasons I couldn't get a good grasp on closures is because they don't mean anything to me in a regular context. In plain English, a closure is the process or act of closing something, and what am I gonna close in JavaScript except for my editor when I get one too many undefined is not a function errors?

The above will log "1 plus 1 equals 2". This snippet calls function B inside of function A, so that function B executes whenever function A is called, such as in the last line.

A useful attribute of closures is that they create variables that are private to a function. For example, the variable one cannot be accessed outside of function A. This encourages us to declare variables only in the scope we need them in, and avoid unnecessary global variables.

Now that we understand what closures are, why did they choose to call them that? Some people say that function A closes over function B, since it is effectively protecting it from being read elsewhere in the code.

And that's it for closures! But we can go a little bit further and relate them to two more concepts in JavaScript that are very closely related: higher order functions and lexical scope.

In this case, using A() will return the body of function B, so we're using A()() in order to execute function B.

I'm using ES5 syntax but all of these concepts exist in ES6 as well.

The other concept is lexical scope. I'm not even sure what lexical means, but in JavaScript, a function's scope starts from its opening curly bracket and ends with its closing bracket. 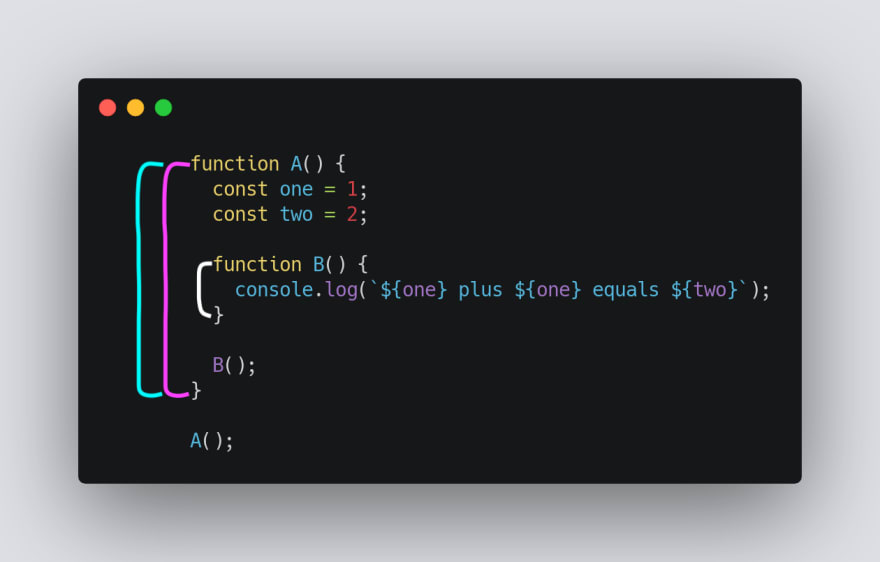 Every function has a closure and lexical scope, even if it doesn't have a visible outer function. For instance, in front-end JavaScript, any function that you write has access to the global window variable because it's in its lexical scope.

Thanks for reading! Until next time 👋

Once suspended, dmahely will not be able to comment or publish posts until their suspension is removed.

Once unsuspended, dmahely will be able to comment and publish posts again.

Once unpublished, all posts by dmahely will become hidden and only accessible to themselves.

If dmahely is not suspended, they can still re-publish their posts from their dashboard.

Once unpublished, this post will become invisible to the public and only accessible to Doaa Mahely.

Thanks for keeping DEV Community 👩‍💻👨‍💻 safe. Here is what you can do to flag dmahely:

Unflagging dmahely will restore default visibility to their posts.