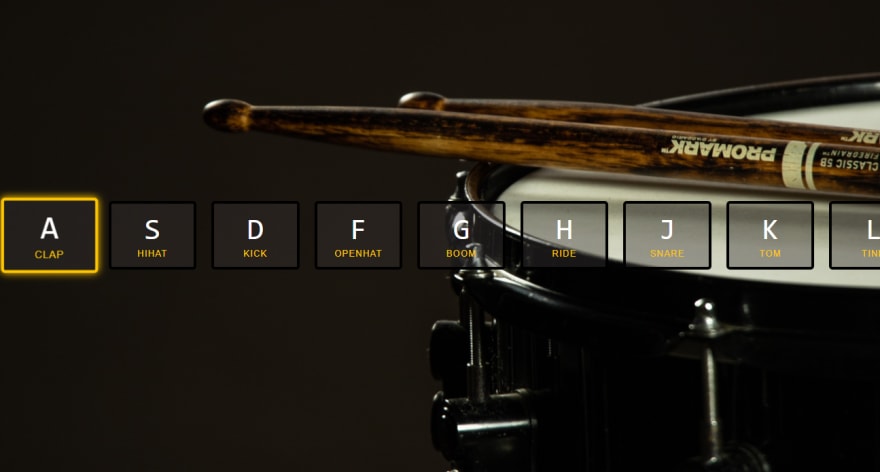 How about building drum kit on your own virtually with the help of some scripting language?Sounds cool right! Let’s start building a simple drum kit using HTML, CSS, and Javascript that runs in a browser which will play the sound when the user press on particular key on the keyboard.

Folder Structure of the project

Open VSCode and create the basic HTML structure in an index.html file by ! and then pressing tab. Give the title as ‘Drum Kit*’. Link **style.css* to the created HTML file.

Inside the body, Create a div element with the class of keys which will wrap all the drum kit keys used in our application.Inside the div class we have another set of div’s with a class of key. Now each one of these keys here has a sound associated with it. For every key on the keyboard when we do key up or key down action, there is going to be something called the key code that is associated with that key. For ex: key code of ‘A’ is 65.

Now, what is this data-key?

The data-* attribute is used to store custom data private to the page or application.

The data-* attribute gives us the ability to embed custom data attributes on all HTML elements.

Here is the HTML code, 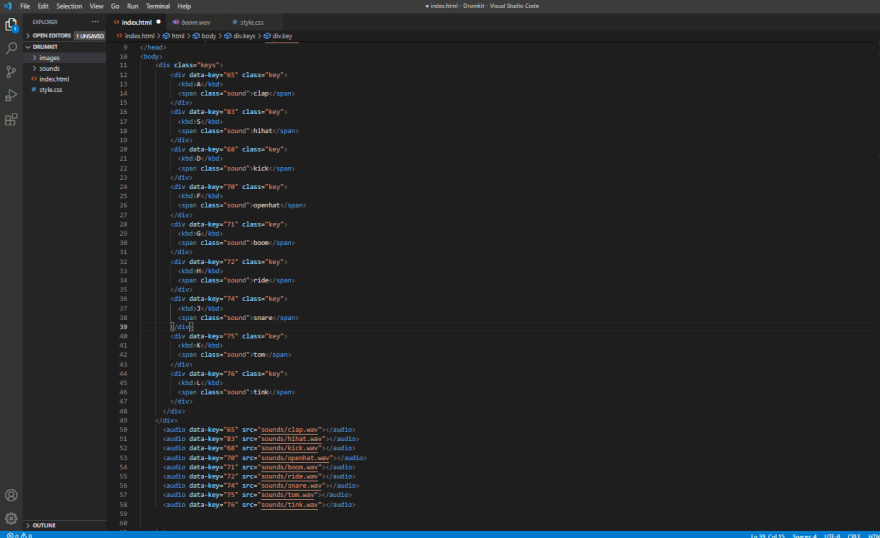 CSS is used to style the different portions and make it more visually appealing.Experiment on color, background, font-family, margin and font size you want to give to the body,heading and the keys. 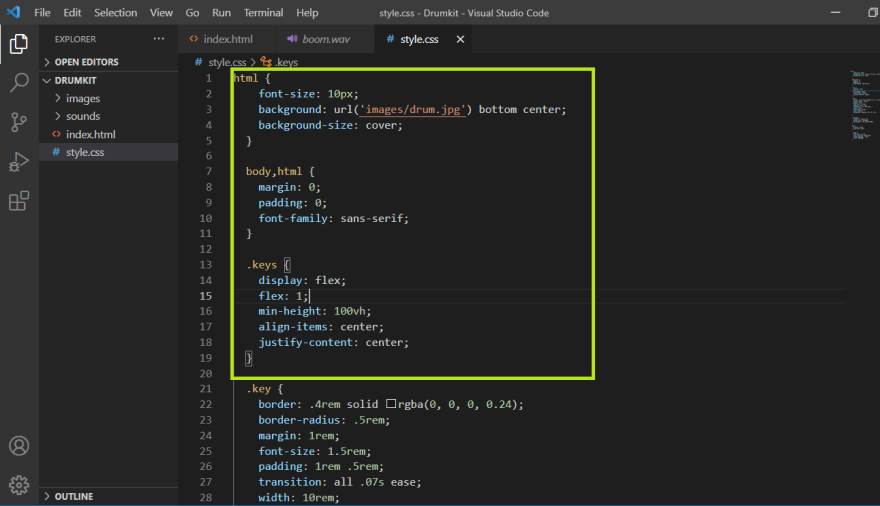 When we press any of these keys ‘A’, ‘S’, ‘D’, ‘F’, ‘G’ ‘H’, ‘J’, ‘K’, ‘L’ on keyboard then let’s do some animation on key div element . On key press from the keyboard the corresponding key div element on the UI should scale a bit and the border should be changed to yellow with shadow which means we have to change the existing property value.This transition should happen on key down(key press)and we will use CSS transitions which allows you to change property values smoothly, over a given duration.

we will define the property values that has to be changed in playing class which will get added to the key div element on key down action using Javascript function. 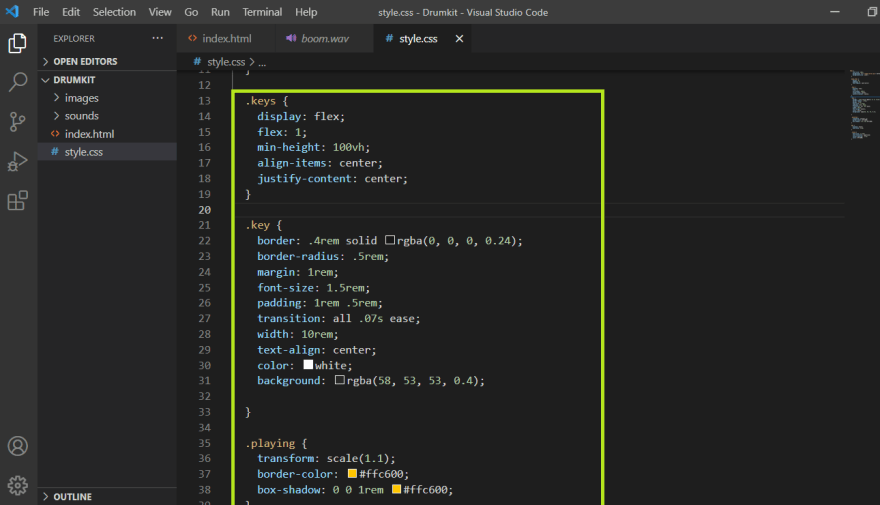 The logic of the player is defined inside the script tag.Our first goal is to listen to the key down event and call playSound function. We are passing the event object to the function where event object holds all kinds of info like what key was actually hit which also contains the keycode.Take an example, we press keycode 65 (‘A’) on the keyboard. Next, we are finding out is there an audio element on the page that has a data-key of 65 for that we are going to use document.querySelector() to select an audio element where it has a data — key same as e.keycode.

In a similar way, find out is there an div element on the page that has a data-key of 65 for that we are going to use document.querySelector() to select an div element where it has a data — key same as e.keycode. The returned element is assigned to a constant variable called key.

If audio element is not present i.e If the pressed key on the keyboard don’t have an audio element associated with it then return in other words statement stops the execution of a function.

Next we are going to the play the audio. Before playing the audio we will

we are done with playSound function*.* As we already discussed,we are adding the animation once the listed key is pressed but we also want to remove the animation in sometime. The requirement is to add the animation only during the key press. we can use a transitionend event that will fire when the element has stopped animating itself on in*.*

Now, what is the transitionend event?

As we already discussed,when the listed key is pressed the div element CSS will be transitioned to scale a bit and the border will be changed to yellow with shadow.The **transitionend** event is fired when a CSS transition has completed. Once the transitionend event occurs we will call removeTransition function by passing event object. The event object contains a propertyName called ‘transform’ which indicates the transform has finished. If the transition is completed then we will remove the animation by removing the class playing. 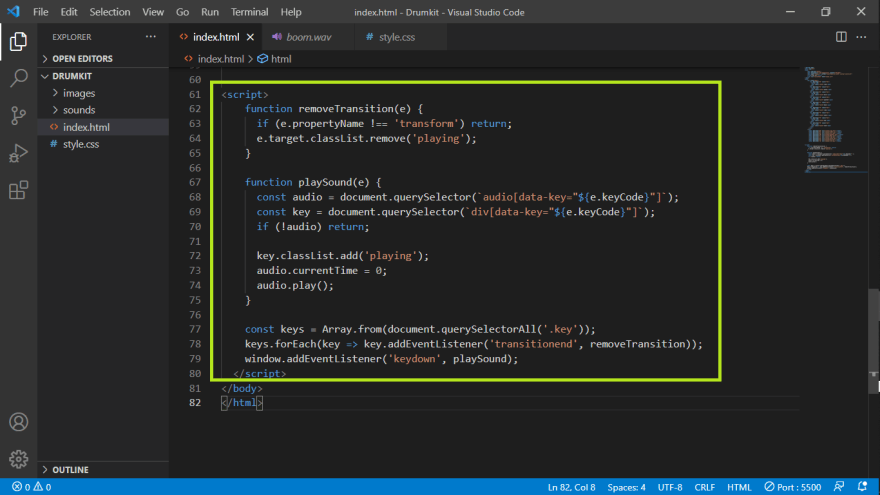 We are done!! Time to run the code and check the results.
https://www.youtube.com/watch?v=fqnWbdOG2-U

Refer https://javascript30.com/ for many such projects

Thanks for your interest.