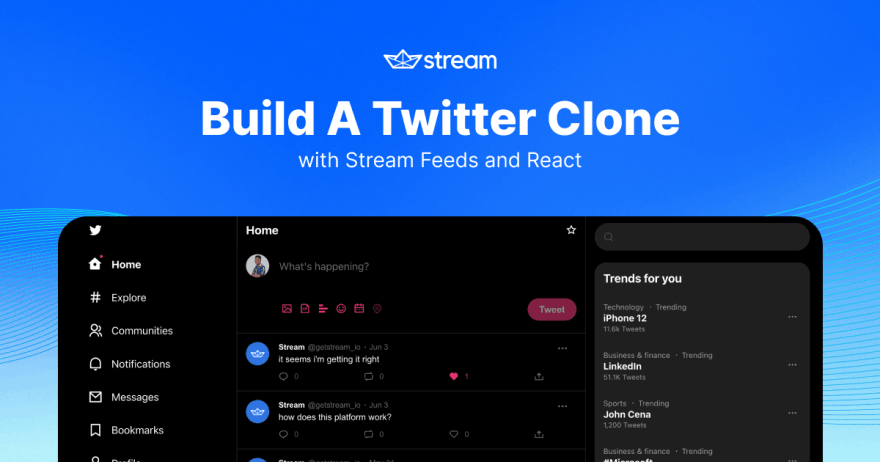 Twitter is a social media application that allows users to create tweets (that supports text, media, polls, etc.), react to tweets, retweet tweets, add comments, get notifications of engagements, and follow other users, to name a few.

Twitter works with the idea of activity feeds for showing timeline tweets and notifications.

Using Stream Feeds and the React Activity Feeds SDK from Stream, we will create a clone of Twitter. We will call this clone Streamer.

This article will be a series of tutorials broken into three parts which you can find at the end of the article.

Twitter has many features from threads, muting conversations, retweets, reactions, and so much more. We cannot do all of that in this clone. Here is the scope of this clone:

Here's a demo of the finished application:

Prerequisites and What You Will Learn

To understand and follow this tutorial effectively, you should have basic knowledge of React.

There is a lot for you to learn in this tutorial, like:

The three parts of the series (with their links) are:

At the end, you will have your Twitter clone, similar to the demo.

In addition to building the Twitter clone, you will also learn about the concept of activities and feeds and how it applies to keeping users engaged and connected with other users in your application. You will understand how to create relationships between feeds by subscribing one to the other and also how to manage notifications for different actions on activities.

Once suspended, dillionmegida will not be able to comment or publish posts until their suspension is removed.

Once unsuspended, dillionmegida will be able to comment and publish posts again.

Once unpublished, all posts by dillionmegida will become hidden and only accessible to themselves.

If dillionmegida is not suspended, they can still re-publish their posts from their dashboard.

Once unpublished, this post will become invisible to the public and only accessible to Dillion Megida.

Thanks for keeping DEV Community safe. Here is what you can do to flag dillionmegida:

Unflagging dillionmegida will restore default visibility to their posts.