A Crontab (CRON TABle) is a schedule of “cron entries” or in other words executable CLI commands to be run at specified intervals. You must be asking yourself: Why do I need these exactly?

In this tutorial I will take you through the basic usage of crontab, which is simply a list of commands that will automatically run from the time of a computer boot until it is told to stop. We will set crontab to execute three simple git commands:

Before we dive into to the code, I want to discuss two possible implementations for automating git commands via use of crontab

Inserting git commands directly into a crontab:
To explain this concept open a new terminal window and in the command line interface, type crontab -e
You should see a window like this pop up: 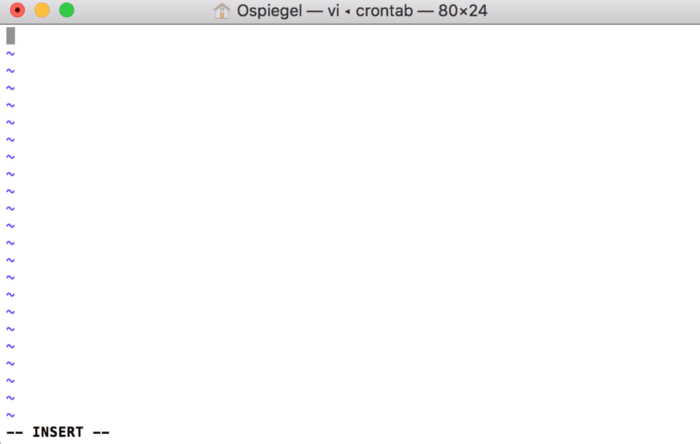 Ok Great! Make sure to press i; and now you can freely add commands.
Any command that would typically execute through the command line will run here too. You need to specify how often you’d like the command to execute. To discuss this syntax in detail let’s examine the below chart:

According to the illustration above- we could simply insert the chain of commands seen below in grey to indicate that:
At the forth minute, of the second hour, of every day, of every month,
we would like to git add, commit, and push a particular repository.
For more cron syntax click here!
It would look something like this:

But this approach is too boring to even discuss… Instead, let’s write a python script that will execute these git commands for us. It will be a great way to introduce you to an awesome python module called GitPython and teach you how to run scripts that use dependancies via the crontab.

ok… let’s get started with the script approach. 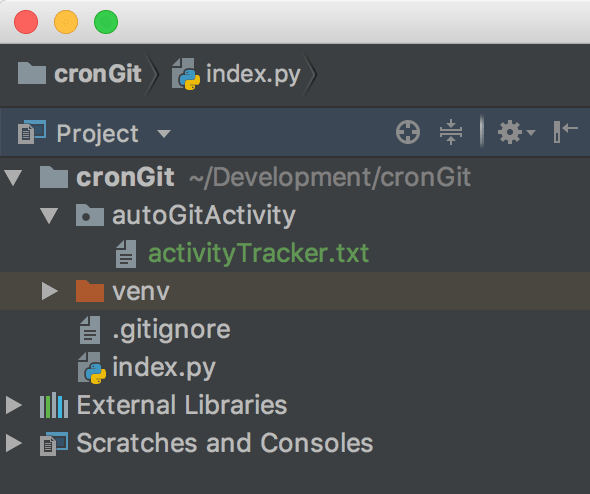 Great we are ready to write some code!!

Here we import the PythonGit module that will help us easily execute common git commands.

working_tree_dir: The absolute path/location of the repository you just initialized in step 7, the one you would like to auto-push.

file: file will be the path to the text file we will add lines for the sake of demonstration

repo: repo is actually a Repo class object that comes with the GitPython module we imported that takes a path as an argument as shown above.

The function will take in a file path to a text file (as a string) and write a new line in it with the text ‘new line’ (how original).

function accepts a Repo object (like the one we already declared) and first checks to see if there are any untracked files. If there are, it will stage (add) all changes/additions, subsequently it will commit with a message, and finally it will push to the master.

We can save and exit our python script.

We would like to add a command that will run this python script we just wrote, sounds easy enough right?

Well not so fast!

Our python script has extra dependancies and we have to run this command through the virtual environment we set up. To do this we will use this chained command:

After pasting the command into the crontab; it should look like this: 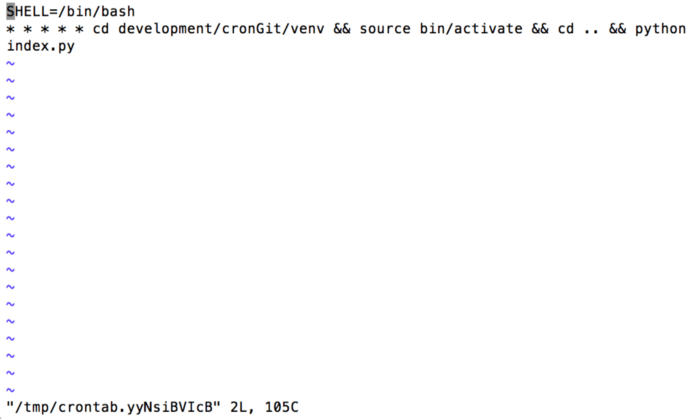 You may now press esc and then follow it up with typing :wq to exit

OK you’re all set up!
You now look like a super active git user, who commits and pushes every minute of the day. You also learnt about crontab recurring commands, and maybe a thing or two about the GitPython module.

How to star a coding YouTube Channel. Step by Step

How to Append Multiple Elements at Once in JavaScript DOM

Once suspended, diethrone will not be able to comment or publish posts until their suspension is removed.

Once unsuspended, diethrone will be able to comment and publish posts again.

Once unpublished, all posts by diethrone will become hidden and only accessible to themselves.

If diethrone is not suspended, they can still re-publish their posts from their dashboard.

Once unpublished, this post will become invisible to the public and only accessible to Sagar Barapatre.

Thanks for keeping DEV Community 👩‍💻👨‍💻 safe. Here is what you can do to flag diethrone:

Unflagging diethrone will restore default visibility to their posts.