When I was migrating @poet_this twitter bot to use the Twitter API v2, I wasn't able to find any good tutorials that do it, atleast none that worked properly. After the bot's success, many people reached out to me asking how they can also create a twitter by themselves! I'm here to help :)

Let's create a twitter bot that replies whenever someone mentions the bot. To keep this simple, we'll just reply with the same text but capitalized.

At the end of this tutorial, I'll also include ways to add more cool features to this, and some ideas for your own cool twitter bot!

Alright, once we're done with that...

I recommend working in a virtual environment. Create a new folder, and open the terminal and use this command

Finally we just need to install the dependencies,

That is the only two dependencies we really need right now. python-dotenv to use environment variables, and python-twitter-v2 to interact with the twitter API!

Technically you can also use a bearer token, but let's keep it simple for now.

To get access token and secret (for testing), you can create them in the dashboard here: 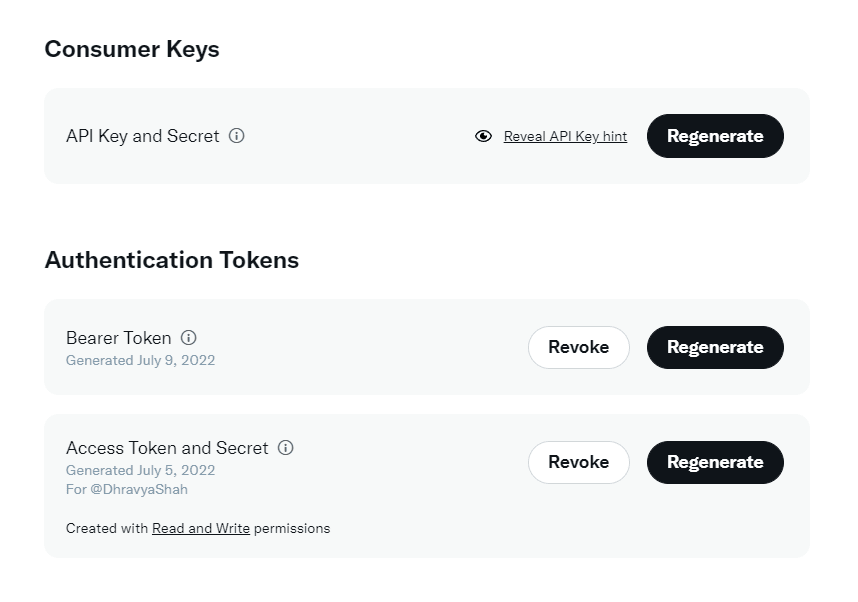 Make sure that you have the Read and Write permissions, we need that for the bot.

Once we have all these tokens, create a file, .env and fill it in, in this fashion -

You can check if the bot is properly authenticated by using some endpoint, for example,

Now let's listen for mentions.
There's one thing to keep in mind though - we don't want to reply to ALL mentions. This is because how Twitter works.

Let's say, I make a tweet and someone comments on it
@DhravyaShah: Hello world!
@SomeOtherRandomUser: Hi Dhravya!

Notice the difference? This can be a problem in a twitter bot, where it will reply even to the comments under the bot.
We'll fix this by checking if the text is ONLY mentioning the bot, and nothing else.

How? Just remove all the mentions and check for an empty string!

Cool, now we get a constant stream of mentions, well not really. We get all the mentions after since_id.

These mentions actually contain a LOT of data. I wanna keep it short so I won't get into the details, but feel free to print() this once and look through all the fields provided!

If new_txt is "" (empty), that means it's a "direct mention" - just a "@bot" comment. If it's a direct mention, the bot has been explicitly called, which means we can respond.

That's basically it! Here's the full code in a Github gist

You can add more features to the bot my adding "Keywords", just like how @poet_this works on twitter - The comment "@poet_this blue 2" (blue 2 being the keyword) generates that particular style of image.

This was just a quick rundown, but now...
Try making a bot yourself! It's a very fun and rewarding process, and you'll learn a lot through it.

Thanks for reading!
You can support me by sponsoring me on Github - https://github.com/sponsors/Dhravya
You can follow me on Twitter - https://twitter.com/dhravyashah

Blue/Green Deployments in Amazon Aurora and Amazon RDS. How it Looks?

Can you compare GraphQL and tRPC?

Dhravya
Self taught developer. I write about Javascript, Python, Web development and more
How to ask for help
#tutorial #beginners #help
I was tired of making banners for my blogs, so I automated it
#python #showdev
This website doesn't have an API, so I made my own, with extra features.
#python #showdev

Thanks for keeping DEV Community 👩‍💻👨‍💻 safe. Here is what you can do to flag dhravya:

Unflagging dhravya will restore default visibility to their posts.