In this blog we'll first try to understand Linear Regression and Gradient Descent intuitively then we'll see math behind the algorithm and then do a basic implementation of it in python.
Structure of this blog is as follow

Let's assume a hypothetical experiment in which students of agriculture science collected some data from different farms/green houses through out many years. Structure of the collected data is as follow

For simplicity we also assume that other factors like water in soil, light etc. either don't affect the yield or are kept fairly similar across all the farms

Lets represent average temperature (°C) as x1 average Nitrite in Soil(ppm) as x2 and harvest yield (kg/sq. m) as y
Then based on the above assumptions we can say that there exists a linear equation

Which will fairly describe relationship between our independent and dependent variables x1, x2 and y. This relationship is also called hypothesis equation. We'll also refer to this as a model.
where w0 is a bias term and w1 and w2 are weights for x1 and x2 respectively
Now our aim is to find value of w0, w1 and w2 which will best describes the relationship

Here err is array of values, we need a single numerical value to compare which model is better.

We need to combine the err values to give a single value, straight sum or average will not work because positive and negative error will cancel each other.

So we take average of square of individual error. We are taking average because we don't want the metric to depend on number of items on training data. This value is called Mean Square Error(MSE), this is our cost function which we need to minimize.

Replacing pi in above equation with our hypothesis function we get

We added subscript i to represent ith row of data. So, x(i,1) means 1st feature of ith row of training data
Obviously another valid cost function will be average of absolute value of individual error also known as Mean Absolute Error(MAE) but we will use MSE for now due to its simplicity.

Now we got our cost function as equation(2.2) above, lets look at it in detail

How would we do it?

Side Note There is a straight forward way to do it using calculus which need finding partial derivatives of the function and equating them to ? zero. As at lowest point of function with continuous derivative, tangent will be equal to zero (i.e at this point tangent is changing from positive to negative or vice versa). Then find the value of variables by solving the equations.
But this method is not always practical due to following reasons

which will have lower MSE value. Then replace Wa with Wb and repeat from step 2 for a specified number of times or until change on MSE in each step become very small

To understand the algorithm visually/intuitively, let’s do a thought experiment.
Lets say you are operating a nano robot in a temperature field (temperature varies in 3D space and is function of location) and your objective it to take the robot to lowest temperature as fast as possible else you risk damaging it.

You can ask the robot for temperature at its current position and move robot in any direction in 3D space, how will you guide the robot to lowest temperature?

Some points to note 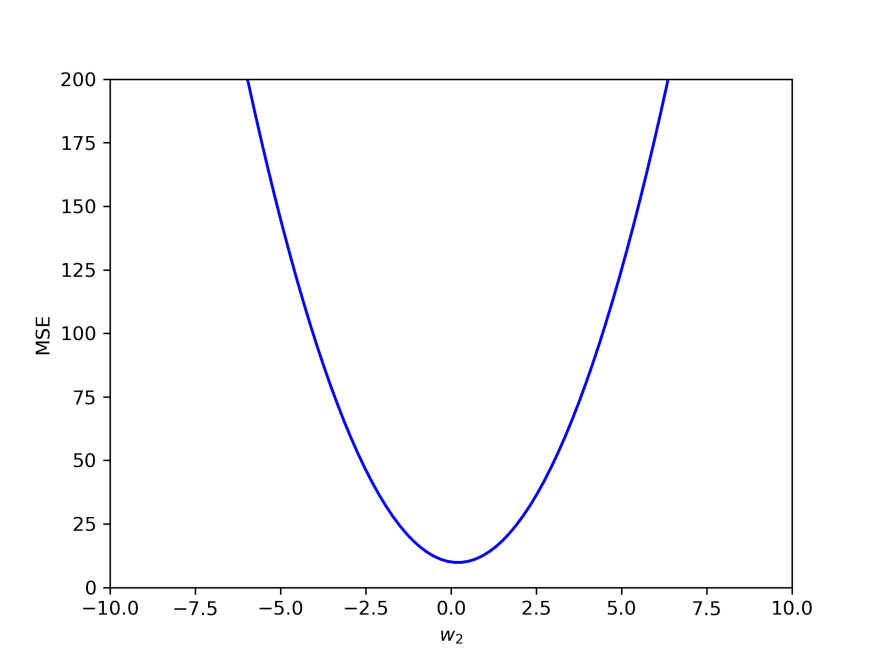 If we take partial derivative of equation(1.1) w.r.t wj, where j is coefficient index

then if we take partial derivative of pi w.r.t wj all other terms except wj is constant. so the result will be

We can represent equation 1.1 which predicts value for one instance using matrix operation to predict for all instances at once as

In equation (4.1) we found partial derivative of MSE w.r.t w_j which is j th coefficient of regression model, which is j th component of gradient vector. Based on equation(4.1) Whole gradient can be represented using matrix operation like

Here:
XT is transpose of matrix X. It will have n rows and m columns

In this part we’ll implement linear regression using basic python and numpy library. numpy library is the fundamental package for scientific computing in python. Its make computation on large array of data easy and efficient.
Numpy Introduction
Please don’t get overwhelmed by numpy, we’ll only use some basic functions of it. It will be explained on comment what each function does.
Installing Numpy If you have installed python using conda or miniconda it should be already installed. If its not installed in you system you can use pip to install it

Hurray!! We have now implemented linear regression and used it to make predictions. We also measured RMSE, which is equivalent to mean of absolute error made when doing a prediction. The mean error is close to std-dev of random error added which mean the model is working quite good.

Above examples are only for illustration purpose to understand the working of linear regression from inside. Following are few things to be noted

Utilising ListView and ArrayAdapter in Java