Functions as a Service or OpenFaaS (lead by Alex Ellis) is a really neat way of implementing serverless functions with Docker. You can build out functions in any programming language and then deploy them to your existing Docker Swarm.

In this post we'll look at a CLI for making this process even easier. 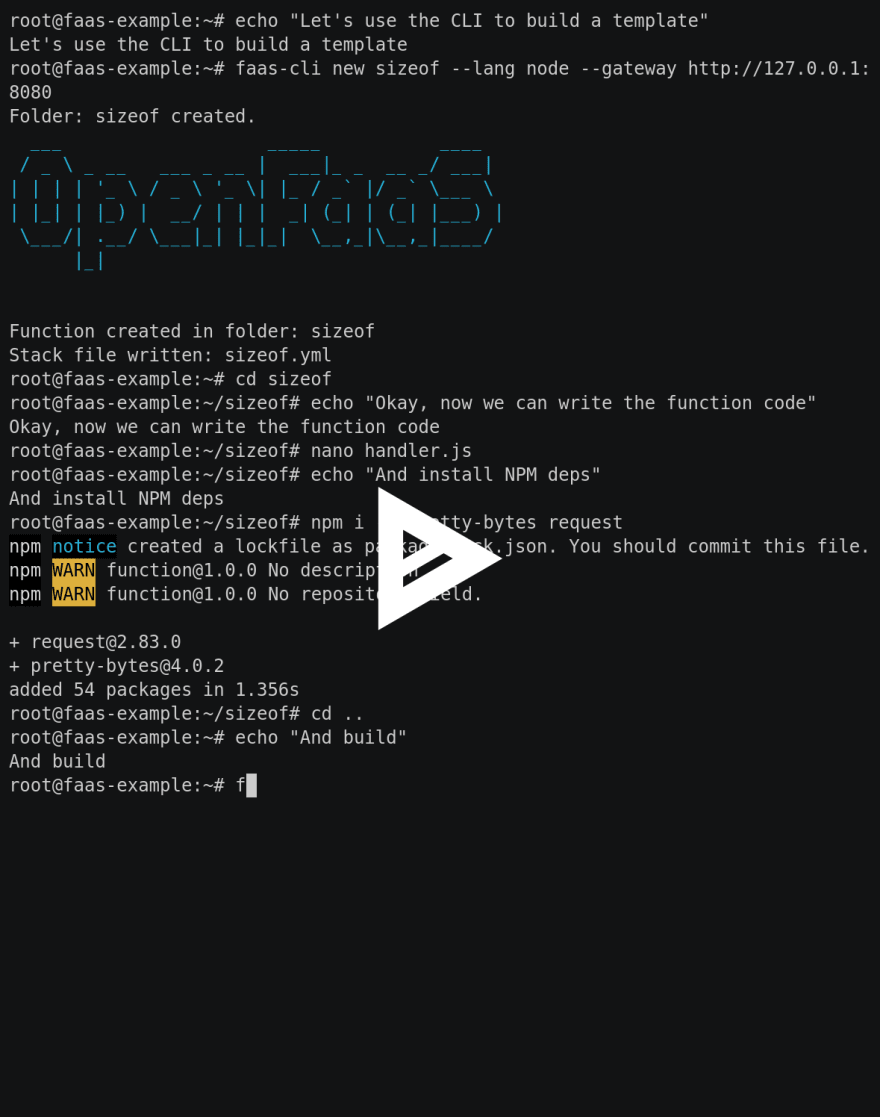 Getting up and running

To run functions with OpenFaaS, you'll first need to deploy an OpenFaaS cluster to a Docker Swarm. This is really simple, just follow the steps over on the deployment guide.

The diagram below gives an overview of how the OpenFaaS function packages, the Docker image, and the faas-cli deploy command fit together.

To deploy a function onto an OpenFaaS stack, you firstly must write the function itself. This is really easy and you can do it in any language which runs inside Docker (i.e. all of them). At the current time, the OpenFaaS CLI supports Python and Node, so for this example we'll use Python.

My very simple fib function is written in Python:

This code is saved in sample/fib/handler.py. It's important to create a requirements.txt file in the same directory (even if your Python code has no requirements from pip) because otherwise pip install will throw an error. 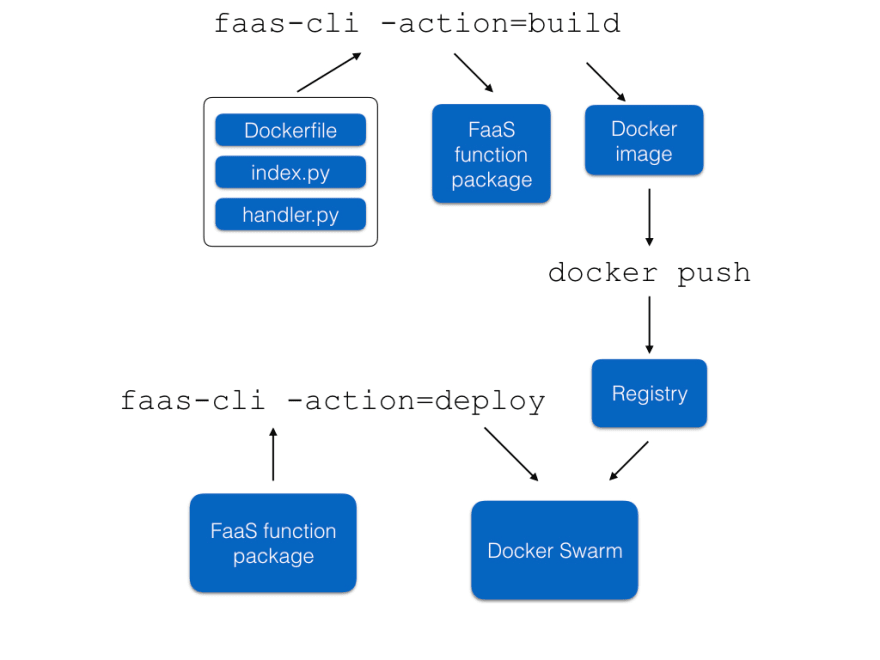 The way FaaS runs the function is by running this inside Python:

When you build a function with the OpenFaaS CLI, what it's doing is packaging up your function (handler.py) and building out the parts for Docker to run the container.

The last step is to write the stack.yml file which FaaS will use to build and deploy the function.

To build the package, simply run:

Here is an example package for our func_python-fib function, located inside faas-cli's build directory:

The package includes everything to allow Docker to run our function - Dockerfile, index.py and handler.py

Now that our function is built, we need to deploy it. Before we do this however, we must push our function to the hub so that all the nodes in the swarm can access it.

Now for the deploy! This can be done with one command:

When you run this command, the function will be deployed to the remote Docker Swarm. How cool is that?

The final thing to do is to test your function deployed successfully. You can do this via the OpenFaaS UI or via curl. 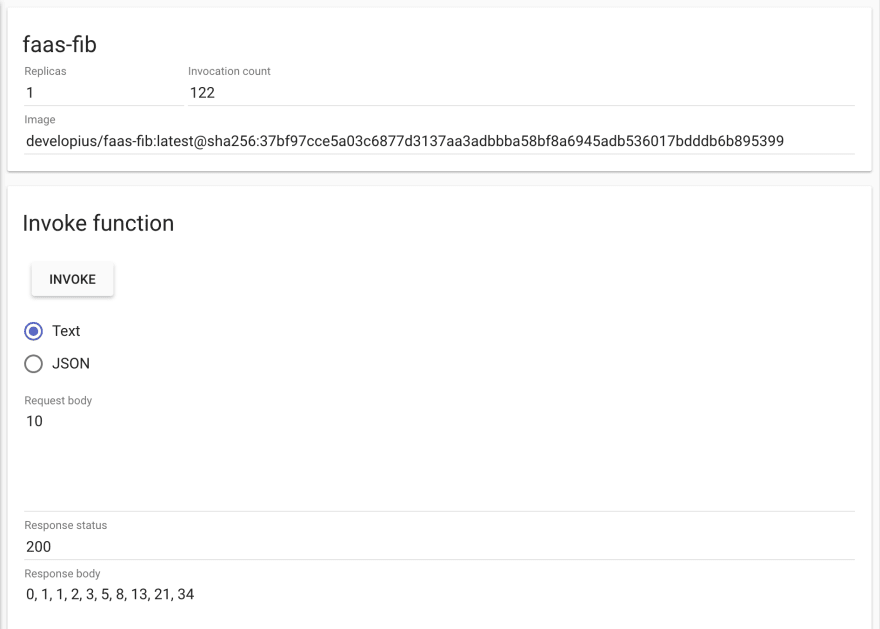 FaaS supports Docker Swarm's replication feature, which allows auto scaling of functions directly inside Docker. OpenFaaS makes use of this internally to make sure enough function replicas are available to deal with requests. It works by exporting metrics for Prometheus, which then generates alerts when thresholds are reached. The FaaS gateway will then scale up the functions when it receives these alerts.

This can be seen perfectly in the screenshot of my Grafana dashboard below.

I've built a number of other functions and hope to expand this to include more soon. I wrote a function to shorten URLs, using a service I built, which received a PR from Richard Gee to merge in an armhf Dockerfile for use on Raspberry Pies. This was a big milestone for me as I've never accepted a PR for one of my projects before!

You can find out more about the projects I've been doing with Docker on my blog at finnian.io/blog - including my DockerCon 2017 writeup! Feel free to get in touch on Twitter @developius and I'd love to hear your thoughts below.

Props to Alex Ellis for creating such an awesome tool, I look forward to participating in the development of FaaS in the future. It's worth noting that FaaS is currently considered experimental but you can expect more language templates amongst some other neat features. First... learn Go. ðŸ™ˆ

nbb and lambda function URL: turn a boring task into a piece of cake.

How do you protect your customers' data on Amazon S3?

How to Create Lambda function URLs

Once suspended, developius will not be able to comment or publish posts until their suspension is removed.

Once unsuspended, developius will be able to comment and publish posts again.

Once unpublished, all posts by developius will become hidden and only accessible to themselves.

If developius is not suspended, they can still re-publish their posts from their dashboard.