Did you know that open-source software (OSS) is used by 92% of developers? So what exactly do they value in it? We find that developers value OSS’s ability to supersede any single contributor and live on almost eternally. We highlight some uncertainty around OSS’s future by showing trends from geographic regions and sectors. The findings shared in this post are based on the Developer Economics survey 19th edition which ran during June-August 2020 and reached more than 17,000 developers in 159 countries.

What exactly do developers value in open-source? 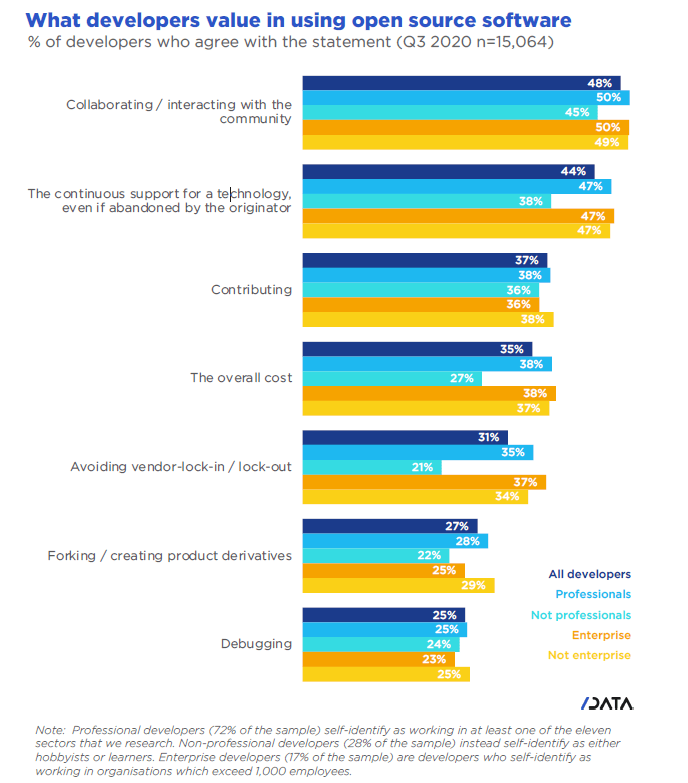 Where OSS is written is changing

At present, the culture of OSS is particularly strong with Western European and Israeli developers, where not a single statement is valued below the average. On the contrary, developers in North America—who, up until now, have driven the OSS movement—value contributing and interacting with the community less than average. This could suggest a cooling off of North American OSS development and a maturing of this ecosystem.

According to our data, South Asian developers value contributing to OSS significantly more than others. In addition, South Asia is the region with the largest proportion of developers who value collaborating and interacting with the community. This combination positions the region to be among the drivers of the next wave of OSS development. In the Middle East and Africa region, some key advantages of OSS, such as avoiding vendor lock-in and the overall low cost have not yet resonated with developers — this is despite the fact that, at least for Africa, income per capita is low compared to global averages. What assists in explaining this is this region’s proportion of professional developers and the experience of its developers.

Some sectors embrace OSS while others don’t

Emergent sectors such as augmented reality (AR) and virtual reality (VR) stand to benefit greatly from OSS as a means of defining a common standard and exchanging ideas. Yet, we find that developers working in these two fields do not value forking/creating product derivatives, nor even collaboration in the case of VR, as much as other developers do, on average, from other fields. This could be partially explained by the lower than average agreement with the need for continuous support for a technology. When developers do not value this characteristic, it is unlikely that they are working with the mindset which would ensure long term OSS growth and desirability.

On the other hand, developers who are building apps and extensions for third party ecosystems, on average, value contributing and forking more than developers in other sectors. Similarly, the very successful node.js runtime has facilitated other extensions and developers working in backend services really value the continuous support of OSS projects. At present, despite the large percentage of developers who use open source software, it is only in certain circumstances that the majority of developers value OSS for any given reason. Perhaps this suggests that OSS has become an expectation rather than being perceived as a gift from society at large to society at large. Observing how developers value OSS in the future would be a good litmus test for the health of open source projects. For now though, there are encouraging blooms in South Asia for example, but also software sectors of scepticism, such as in AR/VR.

Are you involved in open source? Share your experiences with us in our Developer Economics 20th edition survey!

Developer Nation
Our mission is to champion a global collective of software creators who are confident in their technology choices and feel included in the conversation about the future of the ecosystem.
Surprises for you for our 20th anniversary, plus news from AWS: re:Invent, Microsoft and more.
#news #productivity #opensource
Infographic: Who is behind open-source software?
#opensource
📚 Resource Packed Newsletter!
#resources #newsletter #opensource #machinelearning