What is Integration testing?

Integration testing refers to a type of software testing where individual software modules are combined and tested as a ‘group’.

The main purpose to carry out integration testing is to uncover the defects/bugs in the interaction between these software modules when they are integrated/combined. 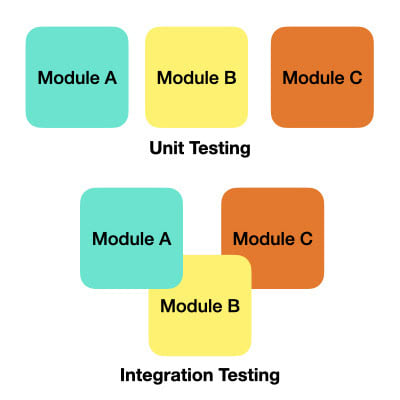 Each module as shown in the above figure, if tested individually is referred to as unit testing. When these modules are combined, then the testing done together on this group is referred to as integration testing.

In short, integration testing focuses on the interactions between components or systems.

Just moving ahead towards the automated integration testing. But before we move further, let me tell you a little about automation testing which you must already be aware of.

Automation testing in simple words is performing and executing software testing activities (which were previously done by humans) with the help of automation tools or frameworks.
Generally, integration testing does not require any specific tools.

The QA team often runs integration tests manually. Usually, it is carried out with the development parallelly.
Still, we can automate the integration testing process which requires a tool to do the work.

Numerous automation tools are available in the market to carry out the process of integration testing.

The automation tool used for integration testing should have the below features:

i. The tool should be able to automate different types of user actions

Thus, it is imperative that the tool you choose for automation of your integration testing should support the automation of the different types of user actions you want to automate.

ii. The tool should support automating different types of modules

During integration testing - different types of modules are integrated and then tested. For conducting this testing successfully via automation, the test automation tool should support test execution on all integrated components.

iii. The tool should allow customization if there is a custom module

During integration testing - when different modules are integrated for testing, there could be modules that might not need custom code. The tool you choose should allow you to add custom test steps where needed with ease.

iv. The test automation tool should let you drive your integration testing with all the different types of data that you need to test it with.

Data-driven testing can be the most important aspect of your integration testing. Because one of the main aims of doing integration testing is to test that the different interfaces are able to process all types of possible data that can be provided as input and give the expected output every time.

When collecting all the types of data, the datasets could become huge. Thus, the test automation tool should support testing with huge sets of data easily.

v. The tool should allow easy test case creation and maintenance to allow for easy edits

Now that the intrinsic aspects of integration testing have been discussed, now is the time to talk about test automation aspects. When you are about to automate, you would benefit from automating with a tool that also makes your test case creation and maintenance easy.

Testsigma is one such tool that comes with all the above features and lets you automate your test cases in simple English on the web, mobile, and APIs. It also has built-in features that let you maintain your test cases easily like selfheal, automatic detection of affected resources after a change.

Another tool that would help you do efficient integration testing on browsers is Selenium - an open-source tool that supports multiple programming languages like - Python, Ruby, Java, C#.

When you start automating tests, you will observe that there are certain steps that are quite repetitive. A good practice is making these steps reusable by just creating them once and using them whenever required.

Another feature that can help you save tonnes of time is support for parallel test execution. When test cases are executed in parallel, that means multiple independent tests are run at one time. Thus, the time they would have taken to execute sequentially is reduced.

When looking for a test automation tool, you should look out for such features that are specially created to help you save time. Saving time also translates to saving money.

Integration testing is an important type of testing that should be executed once component or unit testing is completed.

When looking for automating these test cases, above were some features that your tool should have for you to achieve success with automated integration testing. Do let us know in the comments if you’d like to add more points to this list.

Introduction to Taskfile: a Makefile alternative