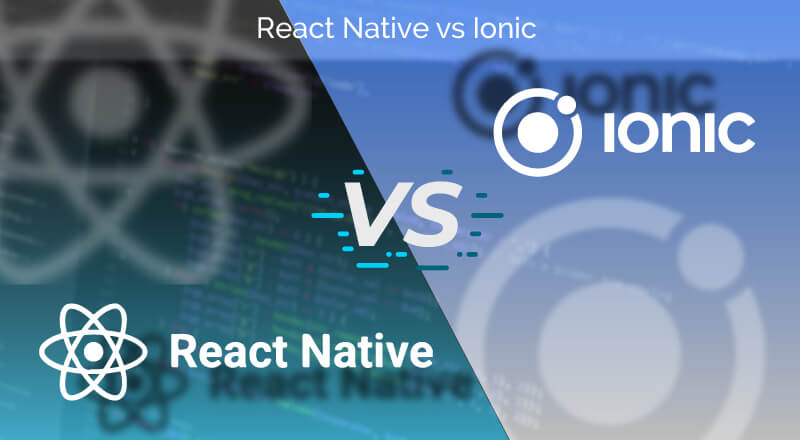 Now, however, this process depends mostly on the framework used for custom mobile app development. A lot of app developers are stuck on the question of which is the right framework to achieve their purposes. The famous debate between React Native and Ionic framework is one that’s been going on for quite some time now.
In this article, we’ll discuss these popular frameworks and compare them to help you understand their differences. We’ll also consider aspects such as features, and the pros and cons of using these frameworks. Before we begin, let us remind ourselves briefly of what native and hybrid apps are.

Native apps are mobile applications developed using the required language according to the guidelines of the operating system. For example, when you write code in Java for Android or use Swift or Objective-C for iOS, then the application is a native app.

On the other hand, hybrid apps are websites fixed in native mobile apps through WebView. They are developed using web technologies like CSS, JavaScript, and HTML that can run on diverse platforms.

These apps look like native apps but with the characteristics of a website. Hybrid apps make use of Cordova and PhoneGap tools to access features on platforms like iOS, Android, and others. The Ionic framework is used to develop hybrid mobile apps.

The Ionic framework was launched five years ago by a web and mobile development company called Drifty.co for the development of hybrid mobile apps. This open-source platform uses web technologies like CSS, HTML5, and JavaScript and platforms such as Cordova or PhoneGap to develop hybrid apps with native-like features.

• This framework is open-source and free
• Only one-time deployment is needed for Apps built with Ionic to be
deployed (in iOS, Windows, and Android)
• It has a fast development cycle
• This framework is easy to learn, and it provides a developing environment that is familiar
• Ionic app focus on UI development primarily

• It requires WebView to deliver native features
• To access the device’s hardware functions, you need to make use of Apache Cordova plugins
• The performance of the Ionic framework has lagging issues

React Native is a cross-platform built by Facebook to develop apps for specific OS's. This JavaScript technology-based platform allows mobile app developers to use a single code base to create apps.

• This framework can handle significant projects because it’s steady and dependable
• Full code reusability to develop Android, Windows or iOS apps
• Constant improvement of this framework with the effective code structure

The Comparison between React Native and Ionic Framework

Top app developers in the USA make use of React Native to develop native apps under the restrictions and guidelines of the platform. This framework uses UI native components to help the mobile app development company to provide a seamless app for users.

On the other hand, the Ionic framework uses the minimum code base to develop apps and Angular to smoothen and speed up the process. A mobile app development company with Angular knowledge can conveniently build user-friendly apps.

In terms of performance, React Native is a more stable framework used for large projects. This framework produces apps that have excellent records of achievement. The Ionic framework, on the other hand, provides a faster app development environment for projects not related to native app features.

The community support behind React Native is strong – this framework also has different plugins available. The React Native community are always helping each other out with any issues they might have.

There is an established community supporting the Ionic framework and solving any issues. However, this framework lacks a significant amount of plugins to get native features – just PhoneGap and Cordova plugins that are used. This means that a mobile app development company making use of either of these frameworks can join these communities for seamless app development.

A web and mobile development company has to make use of a pre-developed component to design apps using the Ionic framework. There are no design components in React Native framework which makes it not a good choice for people looking at app design.

No one can tell you which of these frameworks is better because there are different factors for you to consider before making a decision. Factors such as platform, team size, cost, and more play a huge role when choosing the best framework. Depending on the purpose of your app, selecting the framework to use is a relatively easy task.

How to Program Discord Message Embeds with Buttons

How to set proxy using npm config in NodeJs?