You clicked on this post, which probably means you too make bots, like me. Or you want to. Before I get into this article, I want to clarify that this is not a guide, but a bunch of ways in which you can improve your bots.

It is very common among bot developers to come up with complex and unique command prefixes for their bot, to perhaps stand out. While thinking of a prefix, keep mobile users in mind.

A simple symbol like ., $, ! serves the purpose very well, and easy to locate on any keyboard. A short word prefix (2-4 letters) is also a good idea.

Avoid having multiple symbols or a combination of letters and symbols. Some notable examples are: $!help, bot-name!help. Better yet, use slash commands.

Slash commands are somewhat new to Discord and still evolving. I believe that they are the future of bot interaction in Discord. Unless you have been living under a rock, you must have seen or used slash commands. 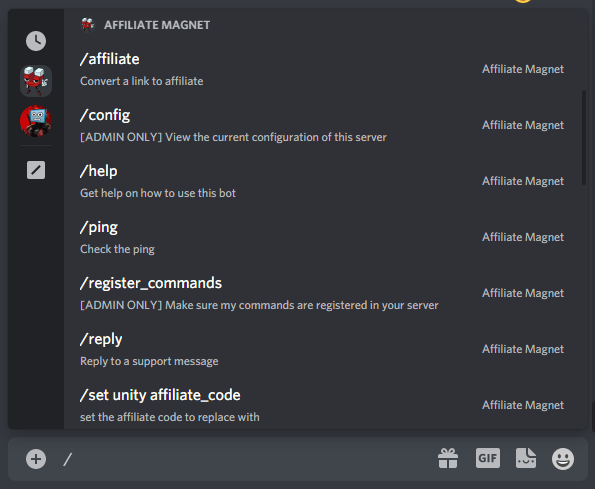 By pressing /, you can see all the available commands for a bot, along with its description. When you use a command, you can see all its parameters. And that's not all! You can even specify what type each parameter should be, so that oblivious users don't enter a string in an integer type parameter.

However, every coin has two sides. slash commands need to be registered beforehand and handled according to their custom_id, which makes it a tedious job to implement them. To solve this problem, I wrote djs-marshal, check it out.

Similar to the point above, message components such as Buttons and Select Menus are a much better way to take input from the user. Are you making the user send a particular reaction to make a choice or to proceed? Toss that crap out and use buttons or select menus!.

Unless your bot is meant to be used by a single person, you should try to add a help command to your bot. This should give a brief description of what the bot does, list all the available commands of your bot, as well as some related links like support server invite and bot invite.

Pro tip #1: Make the bot say something along the lines of Use /help for help when the bot is pinged.

Pro tip #2: Set the bot's description and activity to a message that includes its help command. This way, no matter how a Discord user finds the bot, they will be able to get relevant information about the bot without having to search it up.

A lot of bots block their commands behind a vote-wall. This means that you must vote for the bot on some bot list in order to use it. Though it might bring you a lot of votes fast, it is an asshole thing to do. This may even trigger people to write negative reviews and use an alternative bot. By all means, promote your bot by requesting users to vote for it, but forcing them to do so is not a good idea.

Once suspended, deathvenom54 will not be able to comment or publish posts until their suspension is removed.

Once unsuspended, deathvenom54 will be able to comment and publish posts again.

Once unpublished, all posts by deathvenom54 will become hidden and only accessible to themselves.

If deathvenom54 is not suspended, they can still re-publish their posts from their dashboard.

Once unpublished, this post will become invisible to the public and only accessible to Deathvenom.

Thanks for keeping DEV Community 👩‍💻👨‍💻 safe. Here is what you can do to flag deathvenom54:

Unflagging deathvenom54 will restore default visibility to their posts.