This is going to be about improving deployment process from classic file copy to something more effective, automated and low friction for developers and bringing no interruptions to users. Maximizing Developer Effectiveness is actually competitive advantage after all.

The root cause of this is that .NET resources (.aspx pages, razor views) get compiled to assemblies on first request whenever they change. When IIS is constantly bombarded with requests to all possible resources, it all must be compiled at the same time on every IIS server. On the other hand, when deployed at night, delay was minor as not many requests came in, and those that did, compiling was handled fairly quickly.

ASP.NET Requests Queued is a good performance counter to monitor to identify when user browsers are just waiting for response and how quickly situation resolves after an update. A healthy value is 0 or something close to that. Here you see cumulative request queue for all IIS servers in evening, when load actually is not high. 4 minutes of interruptions: 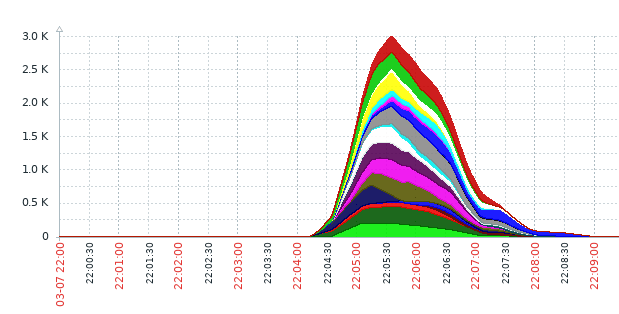 We thought about using robocopy to copy changed files based on timestamp, but that wouldn't work for us - as there could be multiple persons that would deploy the code. When Visual Studio Publishes the project, files between machines have different timestamps. Rsync would probably help greatly, but then again - some challenge to get that on developers windows machines and windows share server. And if different hosts build files, little differences in build tools may end up with different checksums. So we didn't go down this path.

The webroot (and IIS Shared Configuration) is actually served from a single Windows share, which at least provided a low effort way to conveniently copy files to a single location and keep them, along with the IIS configuration, in sync.

That's how we lived for years and it was clear that something had to change.

We came to a decision we would like to stop depending on a file share. We already started using Azure DevOps for some other stuff. So we got an idea 💡

So there are some gems there that are enough to solve our pain points. Now let's see some practical ways on achieving all of this!

Build is the process of generating files we must copy onto IIS servers.

Before we talk about build & deployment, let's get this straight: We are using Azure DevOps online offering. However this could as well be On-Premises installation or any other CI/CD platform of your choice. We are, however, using self-hosted agents that perform the build tasks.

We are talking about solution, which consists of multiple .NET projects. Our main interest is deploying ....Web.Application and ..Web.Application.Payments. The others are mostly dependencies which must also be built. So, the developers used to build app within Visual Studio. When deploying web application, you had to right click on particular project and choose publish. From there, some settings could be configured like whether we want precompilation or not, whether we deploy straight to IIS or filesystem. In our case, it was deployed to filesystem and then copied to production. More about Publishing an ASP.NET web app.

By the way, here is a quick tip on how to find relevant .target files by some keyword:

Or better yet, use Project System Tools extension with MSBuild Binary and Structured Log Viewer to sneak peek into what MSBuild is doing - you won't regret it.

So, the relevant "Publish" command within Azure Devops build pipeline:

The full build can be seen here:

Once we have the artifacts ready (archive of website files), we are ready to implement Release. The release must copy given files to some directory and instruct IIS to change base path from where it will server files. We had 2 options to choose from:

We went for the second option. Deployment agent is actually almost same as Build agent, just carries on deployment tasks.

When creating release pipeline, you get to play with the UI which is nice.

As you see, I'v split some operations into multiple steps.

In case of a rollback, we can open appropriate release and for "Deploy my" stage, press Redeploy. IIS will immediately switch back to appropriate folder. 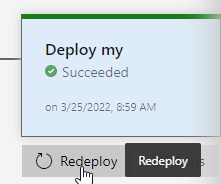 Using cloud hosted solution, if issues do happen, we won't be able to run our deployment pipeline. And they do happen. However, this may impact us on the rare case of rushing some kind of hotfix out. There are 2 steps we can take in this case:

Otherwise we just wait for while DevOps issue gets resolved.

Everything is actually configured that, when production branch gets new code, build is run automatically. After build, deployment is run automatically but stops for an approval. With Azure Pipelines Slack app we just get a message within channel where upon Approve button press, code goes into production.

This doesn't include database updates, which still must be performed manually, but eventually DACPAC deployment can be incorporated within a pipeline too. But luckily, database updates are more rare than backend code/frontend updates.

Judging from the Request Queue size, guess where did deployment happen?

Yeah, that little spike just before 09:00. Except, vertical axis shows max 30 instead of 3k and horizontally, just a blip of a time.

For a fair picture I should share another deployment request queue graphic: 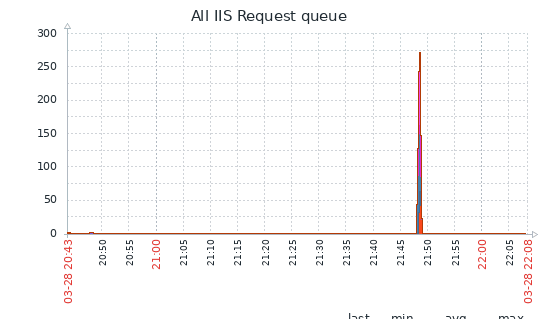 Queue size spiked to almost 300. However it happens on some IIS servers, in this case 3 out of 10. After 60-90 seconds, queue size dropped, so fairly short period of time compared to what we experienced before. But it's not like those IIS completely stopped processing GET/POST requests - actually only minority of requests queued up. Currently I don't know the cause. Maybe if you have any thoughts on what may cause it, leave down in the comments.

In the end, the results leave everyone happy!

On an upcoming post, I'd like to share how these IIS server/Windows OS settings can be installed, managed and kept in sync with PowerShell DSC. And you don't have to keep a separate documentation file somewhere that may drift and be outdated in time. Stay tuned! 👋

Terraform for Dummies - Part 2: Getting Started