To get started, you'll need a few things installed and set up. This should be quick.

That will get you right back to a page like this that is interactive, allowing you to run the code and interact with the database yourself.

If you get errors like ModuleNotFoundError: No module named 'requests' for any of the libraries you installed above, double-check to make sure that you are actually using Python 3.x jupytper --path will let you know if Jupyter is using 2.7 or 3.x

We will need someplace to store our data, so let's create a test database where we can put some random data.

We will create a simple table with 5 columns, one of which is a timestamp

The Create operation in QuestDB appends records to bottom of a table. If the table has a designated timestamp, new record timestamps must be superior or equal to the latest timestamp. Attempts to add a timestamp in middle of a table will result in a timestamp out of order error.

This should return a 200 status the first time you run it. If you run it more than once, subsequent runs will return 400 because the database already exists.

Since we have a new setup, we should add some data to QuestDB so that we can have something to query. We will add some random data, for now.

You can re-run this section as many times as you want to add 100 entries at a time, or simply change the range(100) to add as many datapoints as you wish.

Now that we have data available, let's try querying some of it to see what we get back!

So you'll notice that the returned data is just a massive csv string. If you'd rather have json data, then you would change the endpoint to http://localhost:9000/exec ... But since we're going to use Pandas to frame our data, we'll stick with csv.

We are also telling pandas to parse the timestamp field as a date. This is important since we're dealing with Time Series data.

That's just getting us all the data, but let's narrow the search using some SQL clauses. Let's look for a specific cust_id and only balances of that customer that are in $s. We are also only interested in times the customer was active Since this is SQL, you can make this query as simple, or as complex, as you'd like.

Since all of the data was generated randomly, this exact query may return no results, so you may have to adjust the cust_id below until you get results back.

**Note:* The query string must be URL-encoded before it is sent.

We will use matplotlib to plot the data

And, with any luck, you'll get a great little plot like this: 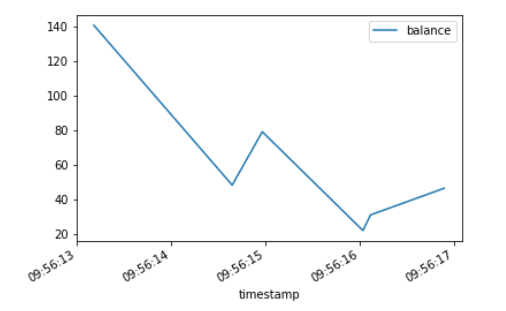 Now we will clean everything up for the next time.

And you're done! If you liked this tutorial, please give us a ⭐ on Github and be sure to follow us on twitter!

Engineering Diaries: How We Created a Google Sheets Integration for our Product

Are you showing up for your Team?

David G. Simmons
I've been doing IoT since before it was IoT and way before it was cool.
Letters to Santa - Automating Joy to the World, At Scale What in the job hopping hell?
#devrel #evangelism #jobs
What Happens When you Put Your SQL Database on the Internet
#database #questdb #sql