Previous part I wrote about the Bfs,dfs and other searches where in game there was only one player but we have a opponent you know that,so for 2 people game there exists some conflicts for that reason we need to implement adversarial search to make computer capable of playing such games with us.In this case let's take a game as example and we choose tic-tac-toe as example.

in adversarial search the algorithm faces an opponent that tries to achieve the opposite goal.So there is first algorithm we can use is minimax algorithm.

A type of algorithm in adversarial search, Minimax represents winning conditions as (-1) for one side and (+1) for the other side. Further actions will be driven by these conditions, with the minimizing side trying to get the lowest score, and the maximizer trying to get the highest score. 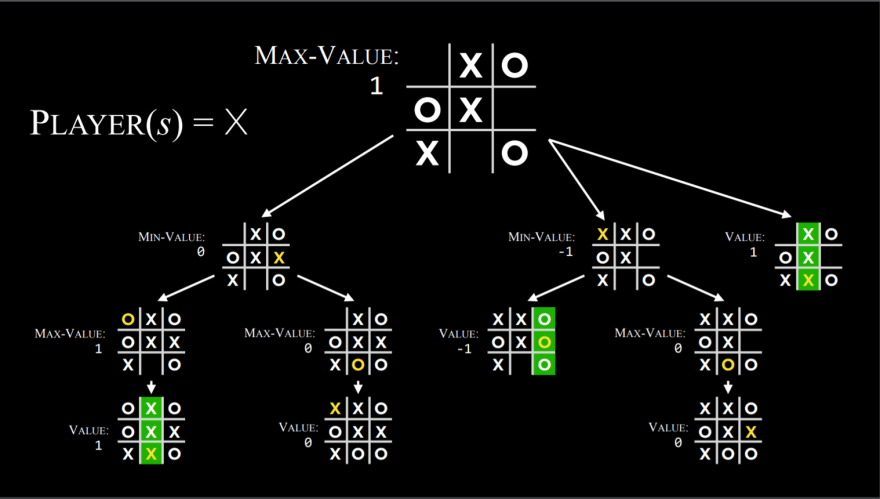 Now minimax algorithm always tries to suppress the human player by calculating min/max value of the actions from the game tree.

Now tic tac toe is a simple game which has 64 possible states so for large games like chess it has 2^64 possible states from which building a hierchical tree quiet impossible for solve this we have two main algorithm called alpha beta pruning and depth limited Minimax.

A way to optimize Minimax, Alpha-Beta Pruning skips some of the recursive computations that are decidedly unfavorable. After establishing the value of one action, if there is initial evidence that the following action can bring the opponent to get to a better score than the already established action, there is no need to further investigate this action because it will decidedly be less favorable than the previously established one.

There is a total of 255,168 possible Tic Tac Toe games, and 10²⁹⁰⁰⁰ possible games in Chess. The minimax algorithm, as presented so far, requires generating all hypothetical games from a certain point to the terminal condition. While computing all the Tic-Tac-Toe games doesn’t pose a challenge for a modern computer, doing so with chess is currently impossible.

Depth-limited Minimax considers only a pre-defined number of moves before it stops, without ever getting to a terminal state. However, this doesn’t allow for getting a precise value for each action, since the end of the hypothetical games has not been reached. To deal with this problem, Depth-limited Minimax relies on an evaluation function that estimates the expected utility of the game from a given state, or, in other words, assigns values to states. For example, in a chess game, a utility function would take as input a current configuration of the board, try to assess its expected utility (based on what pieces each player has and their locations on the board), and then return a positive or a negative value that represents how favorable the board is for one player versus the other. These values can be used to decide on the right action, and the better the evaluation function, the better the Minimax algorithm that relies on it.

reference taken of the definition of the algorithms from the cs50 notes:

Reasons To Use Recursion and How It Works